Slash terminology has evolved over the decades since slash fan fiction first began to be shared in the early 1970s. Charting exactly how the / began to be used, the word "slash" (or "stroke") and words like "pairing" and "shipping" can tell us more about the history of fandom and provide insight as to who we are as fans today.

The term "slash" to designate a homosexual relationship in fan fiction came from the use of the / -- the virgule, or forward slash, punctuation mark, inserted between names. This practice probably began somewhere around 1977. Prior to this time, the virgule had also been used to designate stories that focused on non-sexual friendships between characters (today, a & is often used for friendship). 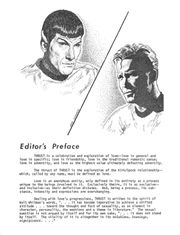 from the 1977 zine Thrust, artist is Joni Wagner

The term "slash" was *not* in use in the 1970s or early 1980s. The virgule was. It has always been used in fandom, as a form of shorthand, to denote relationships -- heterosexual, same-sex, romantic, sexual, friendship. For example, Juanita Salicrup wrote a Spock/Christine series and Mary Louise Dodge wrote a Kirk/Uhura series. By the mid-seventies there was a growing subgenre of stories about the friendship between Kirk and Spock. These were usually referred to as Kirk/Spock stories or Kirk/Spock relationship stories. When "the other kind" of story began seeing publication, in order to distinguish between the two types of stories, people started referring to those as K/S stories. That designation took a while to become common usage, and for the first few years there was still some confusion, as people referred to Kirk/Spock friendship stories as both that and as K/S stories. Eventually it settled into its current usage. [1]

Fannish tradition holds that the word "slash" originated with Star Trek The Original Series fan fiction, when K/S was used as the label for a story where the relationship between Kirk and Spock was laced with sexual tension, whether it was acted on or not. This label allowed fans to differentiate these sexual relationship stories from the ones about Kirk and Spock’s friendship, which were sometimes labelled using "&". As fandoms gathered around new films and television series, the / mark became common as an indicator of a sexual relationship between same-sex characters. 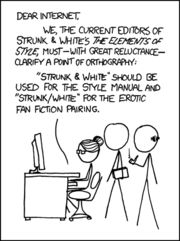 There are many, many instances of fans in the late 1970s, early 1980s referring to K/S as a very intense relationship story that in some (not all) instances crossed physical and emotional boundaries. It is extremely difficult to draw a line between the two or to determine when the first use of "/" for a sexual story occurred.

Could you please sort out your punctuation for relationship. I know what K/S is by now, but is Kirk/Spock the same, or not? (It never used to be, but nobody had heard of the other then!) And if not, how about making it something more obviously different like '&', to avoid all possible confusion? [2]

One of the earliest, perhaps the earliest, usage of the symbol "/" to specifically describe a sexual relationship between two characters was in a humorous limerick published in Obsc'zine #1 (March 1977). "Limerick" by P.M. Muelenberg printed in Obsc'zine #1 was dedicated "To the Kirk/Spock premise, may it rest in peace," referred to the USS Enterprise as "the celestial ship Thunderthighs" and posited that Captain Kirk might not survive an encounter with Mr Spock's Vulcan Genitalia.

It is beautifully put-together, with a certain slant towards K/S relationship stories, though not X or even R-rated, and is obviously done with a great deal of love... 'Difference That is No Difference' is the third in a series of stories by Sue Stuart which started in one of the Gropes. The premise: what would have happened to Kirk and Spock if Kirk had been forced to stay in Janice Lester's body? If one is able to suspend belief (something that is often quite necessary in K/S oriented stories), the idea works very well. [3]

An older term used in the U.K. was "stroke," again meaning "/". Many fans preferred "slash" for dramatic reasons. A contributor to the Starsky and Hutch letterzine S and H #18 (February 18, 1981) writes: "Actually, my main complaint about S/H is the term 'Starsky *stroke* Hutch.' It is just too coy. I like *slash*. It sounds so masculine, like passion in the night and lust that strikes like lightning. *Stroke* sounds so cutesy. *Slash* sounds dynamic, dominant, daring, and exciting." Others preferred "stroke"; one wrote that to her it seemed "very appropriate and nicer than slash."[4]

Use of / as an indicator of a sexual relationship became entrenched as new fandoms arose -- including (Starsky/Hutch), (Bodie/Doyle), (Blake/Avon) and so on. Eventually "slash" became the name of the genre itself sometime in the late 1970s, early 1980s. [6]

There is another early reference in the STW Directory #16, published in August 1977. There, a listing for Thrust describes it as a "Ultra Adult zine. K/S relation. SASE with age statement required." [7] Also in August 1977, a fan wrote a letter to Obsc'zine #2 referring to "Kirk/Spock", explaining exactly why a homosexual relationship in the long-running and meticulously written Kraith series was extremely out of character for that series.[8][9]

In the November/December 1978 issue of Scuttlebutt, the editor of Dreadnought Explorations mentions K/S as a genre all its own: "Sure, maybe you're not Jean Lorrah. Or Spockanalia. Or writing Kraith. Or a member of the Landing Party Six. Or a K/Ser." [10] Another early example is in Star Canticle #2 (June 1979) where the editor recommends several zines, some with this warning: "Please note: some of these 'zines contain explicit material and/or K/S material. If you object to one or the other or both, do not purchase the 'zines." These three zines were Alternative 2&3 ("K/S"), and Matter/Antimatter #2 and Mahko Root #2 (both with the notation "adult K/S"). The STW Directory in spring of 1981 had this disclaimer: "Adult = age statement required, K/S = Kirk/Spock homosexual premise." [11]

Another look at the written record of fandom's early days fills in more pieces of the puzzle. According to fandom historian Klangley56:

The virgule, or slash mark ("/"), has been in use from the earliest days of fandom, including being used to designate relationships--both friendship pairings and romantic/sexual pairings. For example, Kirk/Spock often was used as a shorthand designation for the friendship between Kirk and Spock and Spock/McCoy for that friendship. Romantic opposite-sex pairings also might be referred to this way, e.g., Spock/Christine and Kirk/Uhura. But no one referred to any of these types of pairings, either verbally or in writing, as slash stories.[12]

When "those" stories about Kirk and Spock starting appearing in publication, fans referred to them in many different ways ("Kirk/Spock erotic love stories," "Kirk-Spock homo stories," The Premise, etc.).[13] Gradually, as a way to distinguish them from the Kirk/Spock friendship stories, the fans adopted "K/S" and made it the term to refer to the romantic/sexual premise--although the first printed use of the term “K/S” was in gen zines edited and published by Nancy Kippax and Bev Volker (The Mirage, November 1976, and Contact #3 and #4 in 1977), and it was used to refer to the friendship premise. Some confusion continued for a few years, with K/S and Kirk/Spock being used interchangeably--by some to mean the friendship stories and by others to mean the sexual/romantic premise. 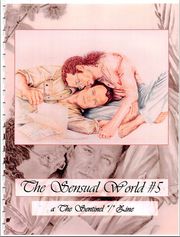 When Star Trek fandom opened up into Media fandom, other fandoms developed their own noncanonical same-sex pairings. They adopted the naming convention of K/S fandom: H/J for Harry and Johnny in Magnum Force, S/H for "Starsky and Hutch," B/D for Bodie and Doyle in The Professionals. With these and, still later, other pairings being published in fandom, fans started discussing this type of fan fiction as a whole. Needing a way to refer to all such pairings and the entire genre of writing, they referred to them and it as "/" (they typed the punctuation mark by itself--a stand-alone virgule, usually within quote marks, sometimes with none). This was in the early eighties.

When verbalizing this punctuation mark in conversation (from the early eighties on), it was, of course, said out loud as "slash." Eventually (primarily in the mid- to late-eighties) the term itself ("slash") started appearing in print. That is, fans wrote or typed "slash" and not "/". The earliest printed reference I found using the word "slash" is in a LoC to the S&H Letterzine #18, (February 1981), but that was an extremely rare reference. It didn't become common in print for several more years.

Today one can still find "/" used to refer to slash, but that's much less common. Also, nowadays a slash pairing is as likely to be designated as, for example, Jim/Blair and Jack/Daniel as it is to be called J/B and J/D. (Not to mention the much more recent mash-up naming convention that applies to both same-sex and opposite sex pairings, such as Clex for Clark/Lex and Spuffy for Spike/Buffy.)[14]