From Fanlore
(Redirected from Adzines)
Jump to navigation Jump to search 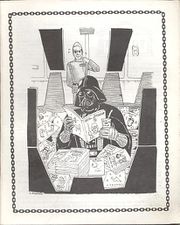 An adzine is a specific kind of non-fiction zine that listed upcoming zines and available zines for sale. The line between reviewzine, letterzine, and adzine wasn't always fixed: many issues of adzines ran reviews, and some ran letters as well.

Adzines also carried personal statements and fannish announcements, including notices regarding the status of zines in production, why zines were late, warnings to other fans of unscrupulous deals, and other practical matters.

The first letterzine was Scuttlebutt. It considered itself the "bulletin board of Trek." According to Verba, in Boldly Writing, issues ran 15-19 pages, and the copy count varied from 300 to 330 copies. It started out a Trek zine, but even in the first issue, it had a listing for a Starsky & Hutch zine. After 16 issues, in late 1979, Scuttlebutt announced it was quitting, which encouraged two new multimedia adzines to start up in 1980: Universal Translator and Forum. 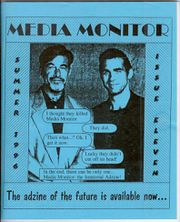 cover of a 1997 adzine, Media Monitor

Scuttlebutt's demise was filled by Forum and Universal Translator. Of the two, Universal Translator was definitely a nicer-looking zine, with clean layout and professional printing. It was started by Susan J. Bridges and Rose Marie Jakubjansky, then Linda Deneroff, and Joy Louise, Jeanne Webster, and Mindy Glazer. Issues included current and planned fanzines, announcements, a list of conventions, and fanzine reviews, some of the latter by its own in-house reviewer, T'Yenta, named after a character in Mindy Glazer's novel Tales of Feldman. Universal Translator's circulation rose to 700 from an initial run of 300. Carolyn Cooper campaigned and got Universal Translator on the Hugo ballot, though it did not win.

Forum, later renamed Datazine, was published by KathE Donnelly and Joyce Thompson initially, then with the help of Debi Barbich, Susan Crites, and Caro Hedge. It came out more reliably than Universal Translator, but was less pretty, mostly because it was printed on an early dot-matrix printer. Though it was even more useful than Universal Translator, it never got quite the kudos.

Initially, adzines didn't list zines by genre, nor were the K/S fanzines uniquely identified as they were, later, in similar publications. Most of the fanzines listed in both publications were still Star Trek, and most of those were for a general audience. In late '86, Universal Translator and Datazine started using "ST" for non-K/S Star Trek fanzines, and "K/S" for that genre.

By the early '80s, the international section in adzines listed quite a few fanzines from Great Britain, as well as a handful from Australia and Canada. The list of out-of-print fanzines was quite large; this was normal since fanzines often went out of print as fast as editors could publish them.

In 1987, ads for fanzines included Star Trek, Star Wars, Doctor Who, Battlestar Galactica, Starsky & Hutch, Space: 1999, Blake's Seven, The Man From U.N.C.L.E., and M*A*S*H. Many of the announcements of the year included fans selling their old fanzines directly or through auction; out-of-print fanzines in great demand could bring in ten times their original price.

It seemed like only yesterday that Datazine and Universal Translator were the bibles of fanzine readers, contributors and editors. Since their demise, a number of other adzines have also fallen by the wayside (Pop Stand Express, Communications Console, Fan Guide, The Communicator), but new adzines always seem to be waiting in the wings. Since the sale of a fanzine depends primarily on the ability of the editor to get the word out to potential readers and conventions are few, far between, and expensive as hell to attend in person, and flyers are more cost effective for repeat orders, the adzine has become a lifeline for finding submissions and readers.

There might be as many as seven adzines on the market in 1993. Which means seven sets of ads, in seven formats, with seven deadline and publishing schedules, and seven - sometimes rather hefty-subscription checks. Many editors can't afford the money to subscribe to every adzine in which they advertise, and can't afford the time to place an ad in every adzine. Relying on recommendations of other fans can be very confusing - the adzine I like to read as a contributor isn't necessarily the one I find results in the most submissions (editor mode), or brings in the most orders (publisher mode). And even in publisher mode, the adzine that generates orders for my zine wouldn't necessarily generate orders for yours. It would seem the only reasonable alternative would be to study the adzines in view of what concerns you the most; check out the size of the audience, the distribution, the type of audience, the accuracy of the ads, the ease or difficulty of submitting ads, etc.[1]

Very few adzines were published into the late 1990s, something that had primarily to do with the growing use of the Internet and e-mail as means of fannish communication. The notable exception was Media Monitor published by Ann Teitelbaum and Dar F. Media Monitor was a subscription/pay adzine that ran from 1993 through 1997. Like many other adzines it contained fanzine listings for multiple fandoms and all genres, (slash and gen), along with wanted ads and notifications of fannish events such as conventions. Media Monitor took a two-year hiatus in the mid-1990s and returned in 1996, this time including Internet listings such as the first Due South FTP fan fiction site Hexwood, along with information about mailing lists, newsgroups and websites. It also began offering the adzine in electronic format which helped overseas fans who had to pay extra postage. Media Monitor ceased publication in 1997.

When some agents started carrying tens, or even hundreds of different zines, presenting zines with even short descriptions became impractical. At some point, Bill Hupe and others stopped advertising in adzines and instead, started simply publishing a list of the zines they were selling.

Today, zines aren't advertised in printed adzines but on websites.