Snitch is an Starsky and Hutch adzine.

It was bi-monthly, and then quarterly.

There was an announcement for it in The Who Do We Trust Times #8 which said it was to appear at Zebra Con 1987 and would contain "zine listings, want ads, and other information for SH fans."

"Official" circulation in 1987 was ninety fans, though each of those issues was probably read and used by more than one person.

When Rogers took over publication, it appears they started numbering over again at "1" and renamed the zine "Snitch... The Adventure Continues."

Snitch 18 was published in August 1990 and contains 4 pages.

Monday, 6th April — memorable date — brought an 8a.m. telephone call from Illinois when Mary told me that SNITCH was on its way and should be with us in time for the SH Fanday in London on the 11th (coinciding with another SH event in Baltimore). It's great to have this very helpful publication restored; I'm really glad that Mary can take over what Carol and Merle started for us — THANK YOU to all three of them.

Snitch... The Adventure Continues 1 was published in January 1993 and contains 5 pages. The editor notes that this is the "fourth January issue."

Snitch... The Adventure Continues 2 was published in July 1993 and contains 5 pages. 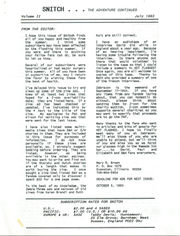 first page of the second issue of the new title

Snitch... The Adventure Continues 3 was published in September 1993. It was the final issue.