Susan M. Garrett was a prolific and respected gen writer, publish editor in many fandoms, but especially Forever Knight – she was hugely active on ForKni-L, and a member of the Ravenettes.

She won four Fan Q awards for Forever Knight zines or stories. Her Forever Knight fan fiction and non-fiction can be found on her website, The Library of Lost Souls. Her zine publishing was done through Penguin Press.


She befriended people everywhere she went, and she was a GOOD friend to those people, too. She encouraged people and built them up. She was patient with their troubles, and a great listener. She was at her happiest when she was making other people happy, and she understood how to do that as well as anyone I've ever known.

She was also a very gifted writer.

She knew what made a good story, and how to find enough common threads to put uncommon things together and make it work. She could surprise you in a good way.[3][4]


Susan Garrett was what we used to call a SMOF--Secret Master of Fandom. She knew everyone, knew the rules and when to break them. Knew the secrets and the stories and the jokes and always always where to find the nearest bathroom.

And I could never have hoped to have a better mentor than Susan. She didn't just teach me about fanzines and writing and cons. She taught me about the shape of stories and our appetites for them, the joy of friendship and the importance of being good to people. Not just because you never know who might be there for you when you need a hand up someday, but just for the sake of being a good person in a "thus we refute entropy" sort of way.[5]


The world's a poorer place today because she's left us....Susan stood for a time when fandom was more personal, more generous, and infinitely more pleasant ... for me, at least. She personified everything that was great about being a fan -- passion and enthusiasm and generosity and wit and the willingness to work and work hard, for the sheer love of writing. It was about doing it well, not getting instant kudos via the press of a computer button.[6] 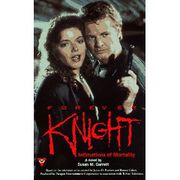 Susan is perhaps best known for being invited to write a Forever Knight TV tie-in novel, Intimations of Mortality, in 1997. But it's possible her biggest contribution to fandom was the writing and publishing of

These works are wonderfully informative guides for new-ish zine fans. She also published an adzine for other adzines:

Susan Garrett was a member of the Forever Knight, Doctor Who, Shadow Chasers, and The Secret Adventures of Jules Verne fan fiction communities. Her first official fanfic was written for the series Fantastic Journey back in the mid-seventies. Susan is the author of over 400 fanfic short stories, multiple novels and novellas and the editor/publisher of over 45 fanzines.

She was given the title of "The Finder of Lost Fandoms" due to her interest in limited episode series - if a pilot was written but never filmed, she was probably a fan of the show. Due to her interest in a multitude of fandoms and the inability to tie her to one, Susan's catchphrase was "I am not a fandom, I am a free fan."

She was given the title of "The Empress of FK-Fic" by the FKFIC-L list. On the FKFIC-L list she started the practice of Story Challenges, participated in a number of round robins and was a part of the first fictional FKWar. In addition, it became a tradition to post Forever Knight fiction to the FKFIC-L list to help Susan celebrate her birthday.

She wrote the essay "The Not-So-Gentle Art of Nick-Picking" in 1995.

In 1996, Susan vowed to cut her hair (uncut since she was 13 years old) if Forever Knight came back for a fourth season. From her FORKNI-L sig: "When we get a fourth season, the hair GOES."[7]

She is the author of the professionally published Forever Knight tie-in novel, Intimations of Mortality in October of 1997.

At the time of Susan's death, the ForKNI-L-based Forever Knight fandom was in the middle of organizing its first War in six years. War 13 (played in October 2010) was therefore dedicated to her memory.

Susan's many interests included the fandoms listed, as well as Q.E.D., Beauty & The Beast, Quantum Leap, The Man From UNCLE, Kolchak:The Nightstalker, X-men (comics), Dark Shadows, The Man From Atlantis, The Avengers, The Prisoner, etc.

She was also a fan crafter. Time Bears was a Doctor Who zine that published 26 of Susan's Doctor Who-related needlepoint designs.

In November of 1998, Susan spent the day as an extra on the set of Homicide: Life on the Street, and wrote an account of her experiences.[8][9][10] She appears in the episode "Bones of Contention", which aired in season seven, January, 1999.

"NOT The MediaWest*Con Program Guides"

Susan shares the honor of being the co-creator (with Ann Larimer) of the NOT The MediaWest*Con Program Guides, a satirical homage to all things fannish published for many years and distributed at MediaWest*Con.

See more at A 1986 Interview with Susan M. Garrett.

The introduction from an extensive interview in Pop Stand Express #13 (1986):

For most of us it would be difficult (if not impossible) to cite the exact date we entered fandom. Not so, Susan Garrett. As a senior pursuing a degree In literature at the University of Dallas, she vividly remembers the afternoon of January 15, 1983, as one spent getting feedback on some of the stories she had circulated among fellow students and friends from a local Dr. Who club to which many of them belonged. Somewhere in the midst of "...this is good—change that—leave this alone..." someone casually announced: "You should try to publish some of this stuff." Although fandom proper was still an unknown, a decision was reached to assemble the stories and create a small publication entitled "Time Winds" and distribute it through the club. It wasn't long before someone Introduced her to UT and Datazine and her official entry into fandom was complete.