From Fanlore
(Redirected from The Fantastically, Fundamentally Functional Guide to Fanzines)
Jump to: navigation, search

They were funny and comprehensive introductions to zine fandom of the time. They were also noticeably inexpensive: the Readers and Writers volume was ~120pp, lg. digest-sized and saddle stapled, for $3. The 3-volume volume for Editors & Publishers was $6, and went into excruciating detail about things like estimating the costs for putting out a zine.

In the early '90s, they were briefly online, but the pages were taken down before they could be copied and saved. 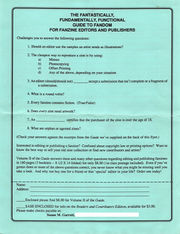 one side of a flyer for the "Editors & Publisher's" edition 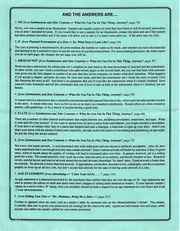 the other side of a flyer for the "Editors & Publisher's" edition

From Media Monitor: The Fantastically Fundamentally Functional Guide to Fandom for Fanzine Editors and Publishers: "Curious about copyright? Up in the air about selling used zines? Confused and comfounded in trying to find new writers and artists for your zine? This second volume of the GUIDE has been written just for you -- the editor or publisher in search of new ways and means to make your zine empire run smoothly. Digest size. 160 pages."

From Media Monitor: The Fantastically Fundamentally Functional Guide to Fandom for Fanzine Readers and Contributors: "You say your favorite show has been canceled and the midseason replacements are about appealing as month-old bloodwurst? Why not use your spare time and bone up on some helpful hints? you, too, can learn how to write a productive LOC, how to send in a submission that will stand some chance of acceptance, how to deal with recalctrant editors, and know exactly what your rights are! Buy one for yourself or a friend, help raise the consciousness in fandom! Digest size 60 pages."

The Fantastically Fundamentally Functional Guide to Fandom for Readers & Contributors

The Fantastically Fundamentally Functional Guide to Fandom for Readers & Contributors was published in 1989 and contains 57 pages.

The Fantastically Fundamentally Functional Guide to Fandom for Fanzine Editors & Publishers was published in 1990. It consists of three volumes.

There's a really wonderful publication out, called The Fantastically Fundamentally Functional Guide for Fanzine Readers & Contributors. I don't know how they managed to get the title to fit the cover, but they did. And it's a riot. At three dollars, it's the cheapest date in town. Even as I type this, I can't stop sniggering. Neofans and dinosaurs alike will find T.F.F.F.G.T.F.F.F.R.& C. to be both entertaining (I know I about bust a gut the first time I read it) and informative. Hey, did you knowthere was such a thing as 'Seamail/' Neither did I, till I read the zine. Anyway, if you've got three dollars burning a hole in your Joy Hall of Everything Bag, send it off. I understand that an 'Editor's' edition is due out around May. You'll have to get in line behind me. [1]

I just loved what you said about readers doing LOC's. So true, so true. Somehow the idea of doing LOC's was instilled in me when I first came into K/S. Remember that little book, The Absolute...Guide to Fandom (something like that)? I read every word and took it very seriously." [2]

I received my copy of THE FANTASTICALLY, FUNDAMENTALLY, FUNCTIONAL GUIDE To FANDOM and wanted to let you know how much I enjoyed reading it. I've been aware of fandom for many years and although my participation has been limited and on the periphery, I thought I knew pretty much about all there was to know about the do's and don'ts of zine ordering and contributing. I ordered your pamphlet more out of curiosity to see if there was some kind of "insider" information that I wasn't aware of. The topics were discussed clearly and fairly, like being talked to by an honest friend. I was pleasantly surprised to discover that most of my usual practices were correct, but there were a few aspects of this "hobby" I hadn't considered from a point of view other than my own. I learned a few things and had fun doing it. [4]

I'm about halfway through it and am a bit overwhelmed with how much I didn't know. After reading this, I doubt if I will ever put together a fanzine of my own, but I sure as hell have more respect for those who do. [5]

WHERE WAS THIS THING WHEN I WAS STARTING OUT???????

A LOT of editors, publishers, and writers have been screaming that question since Susan published the FFFGTF in 1989. It is a simple, well written and comprehensive guide on how to properly deal with the fanfic biz. Part One deals with contributors: how to submit your work, how to deal with editors, how to order zines, how to trash...er, review zines, and other "dos" and "don'ts" that every neo writer needs to know {and every old-time writer has no doubt violated at one time or another!) Part Two (actually part one of "For Fanzine Editors and Publishers") talks about the physical composition of fanzines—how to get the beast copied, how to bind it (side staple? velo binding? spiral binding?), and of course, how to get contributors to your masterpiece and let then know what you will and will not accept. Volume II delves further into submissions and zine contents, and how to deal with those capricious critters called writers and artists. (Of course, those of us who both edit and write would NEVER treat other editors in such shoddy fashion, WOULD WE?). The final part talks about Dealing With Your Printer, advertising your zine, selling it, and how to deal with feedback (LoC's and reviews).

There is a reason that when I hear someone talk about wanting to write fanfic or putting out a zine of their own ("After all, it can't be that hard, can it?"), I give them my copies of FFFGTF or Susan's address, whichever is more readily available. BUY THIS MONSTER. It is worth its weight in gold and will save you much grief as you make your way through the wonderful world of fanfic. [6]

Much content was printed by permission in the Star Wars letterzine, Southern Enclave.