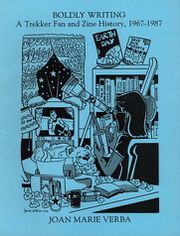 Joan Marie Verba is a very long-time Star Trek fan, writer and editor. She discovered Star Trek in 1966, and discovered fandom in 1970 when she met a fan who illustrated for T-Negative at a high school speech competition. [1]

Verba ran the Star Trek review and letterzine Treklink for four years, and wrote the fanfiction novels, Descent into Darkness and The Genesis Aftermath -- the latter is a fixit sequel to Wrath of Khan to show it was possible to save Spock without breaking the laws of physics, or blowing up the Enterprise.

She also edited and published Salutatorian and Multi-Species Medicine and wrote fiction for Moon Phases, a Darkover fanzine.

One of Verba's most well-known publications in fandom is Boldly Writing: A Trekker Fan & Zine History, 1967-1987, a detailed history of early Trek fandom -- the only history of fandom of that period to give so much detail on zine writers and editors, and to spend time discussing the SF fan vs. Star Trek fan divide.

Verba has gone on to write professionally. She has had seven stories published in Marion Zimmer Bradley's Darkover DAW Darkover Anthologies including "This One Time" (1985), "Mind Eater" (1990), and "Invitation to Chaos" (1991). She is also the author of the non-fiction science book Voyager: Exploring the Outer Planets.

Verba was the co-chair of BlooMN'Con and a guest of honor at Brit Con.

In 1995, a fan explains one of Joan's places in fandom, one of that of three women: Shirley Maiewski, Ruth Berman, and Joan Verba:

Shirley is often affectionately called "The Grandmother of ST" ... I and many fans are indebted to her, and a few others like her, who virtually founded ST fandom and helped then-neofans like myself to get around it. If it weren't for Shirley and others who refused to let TOS die, there would be no fandom, no TNG, no DS9. Since my return to fandom, it has heartened me to see veterans like Shirley, Joan Verba and Ruth Berman still plugging away. It is no exaggeration to say that without these good people, none of us would be here. [2]

In 1998, Shirley Maiewski wrote about Joan:

As many of you must know, I had the great privilege of being a part of the Star Trek Welcommittee from its inception in 1972 until its ending in December 1997. That's how I came to know Joan Marie Verba and came to understand what a terrific person she is. The Doctor's Exchange is so fortunate to have her working for everyone. There is an old saying: "If you want something done right, ask the busiest person you know to do it." That's Joan. She will do it! [3]