You may be looking for The Academy Curriculum.

Academy Chronicles is a gen Star Trek: TOS anthology that has at least 18 issues. It was published quarterly by the Star Fleet Academy.

Two stories, 'The Door' and 'The Touch of a Stranger,' were later printed in Reflections in Amber.

In 1984, a R-rated sister zine called "Academy Chronicles Red Light District" was proposed, but it was never published. 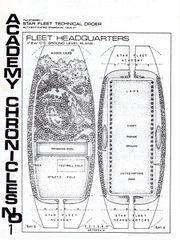 ...I received my Academy Chronicles #5. I really did enjoy the write-ups of Shatner and Nimoy. I understand the electricity of meeting famous people. I've been very lucky myself.

The magazine is clean and will presented. The interview with Walter and write-up on George completely held my interest. I'M NOT DEAD YET, though short, was good. I have not heard of Johanna before, but hope to see a lot more of her work in the future..

I don't have the time to go into every piece individually but I believe, what with the poetry, interviews, games, and write-ups, that A.C. is one of the finest zines I have seen. Needs a bit more art, but what's there is excellent. I sincerely hope that Davey, myself, and Rene can be useful members.

I know my two Hoka companions are proud to be associated with your organization. -- a new friend...no, 3 new friends, Paulie, David & Rene [1]

Academy Chronicles 6 was published in 1979 and contains 67 pages. It was edited by Jane Freitag. 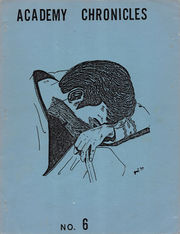 For a club zine, this contains surprisingly good work. Outstanding here, though it would be notable anywhere, is Ellen Kozak's 'Indian Summer of a Vulcan,' a bittersweet piece that tells of a Spock who has outlived the Enterprise and all aboard her and how he becomes acquainted with one of Kirk's collateral descendants. For this story alone, it's worth your while to buy this zine. The other stories, most of them by editor Jane Freitag, are ordinary, but sufficiently readable. 'Chance Encounter' is about Spock and Kirk's first encounter; 'The Secret' has McCoy springing one on Spock; ' Spock's Grain' is an uneven sf-ish whodunit, in which quadrotiritical behaves like tribbles. Several feature-ettes-- songs, poems, interviews, puzzles pad out this zine.[2]

...A friend and I attended the Cleveland con and we both picked up copies of Academy Chronicles #6 there. I would like to say we both vote "Indian Summer of a Vulcan" one of the best ST stories we've ever read. It's great! "Chance Encounter" and "Dark Lady" were particularly good, too, and I liked the idea of "Everyman". I'll probably never make it to space myself and feel that I know how "Everyman" feels. In regard to "Dark Lady", let's see more about Uhura. It seems to me that there must be a lot of good stories there. Looking over issue #6 again, I like the poem on Edith. The poem expresses Kirk's anguish and feelings of duty very well.[3]

WOW!!! How I wish I'd heard about you sooner! I thoroughly enjoyed Academy Chronicles #6 and enclose my order of #7. Please pass my thanks to Ellen Kozak for a FANTASTIC story. I hope she intends to write something more about J.T.K. II—especially with the memories/experiences he can now draw upon.[4]

You don't know what a joy it was to receive Academy Chronicles #6. Nell's story, "Indian Summer of a Vulcan" was terrific. I Cry each time I read it. Jane's stories were excellent. I especially liked her characterizations of McCoy. One could actually hear and see him speak those lines. That, to me, is the sign that someone has caught that character 'correctly'. My congratulations. In "Spock's Grain," the whole story hit home with me, I am one of those people who—like Spock—are able to 'hear' or 'feel' sound waves that are higher in frequency than the normal human auditory range. The interview with Susan Sackett was a treat for me. I pray that your zine will continue to grow in excellence.[5]

I picked up your zines #6 and 7 at 2-Con, and want you to know how impressed I am with them. Of course I will always fuss about the wasted space as in the exorbitant amount showing in Johanna's story in #7, but perhaps you had a good reason like an uncontrollable typist or something. Jane Freitag's and Ellen Kozak's writing skills are to be envied, and I enjoyed every moment of them. Anyway, this is one of the very best local club zines I have ever seen—and I buy almost all the ST zines—and I certainly do want future ones myself. And past ones, too, if still available.[6]

I received your latest copy, Academy Chronicles 7. I'm not sure if it's better than AC6, but it was very good. "The Slip-Up" is probably the best. I was expecting for our heroes to get Out of it, and I was slightly disappointed that they didn't find a way out. However, Kirk and the rest are only human, after all—should lose once in a while. The ending was a defin te plus.

"The Tattletale" ranked second, though I thought a science flctioi animat could have been used instead of a dog. It's good to see computers in a different light, than portrayed as the villain as was done on the shows. The poems were very well done on the whole. "Untitled" and "Captain, the Engines" were the best.

Another point I'd like to make is that you had four stories (five, if you want to count "First Step", which was only about three hundred words, not all that long) and you only had one action-adventure story. You could've had at least two.[7]

Contents of this issue include two long stories and two short ones, two excellent interviews with Susan Sackett and a Movie set visitor, several poems and a couple of songs (one complete with music). Ellen Kozak's "Indian Summer of a Vulcan" is a very sensitive tale of an aged and dying Spock who has a chance to meet and know a lineal descendant of Peter Kirk, and who recognizes some of his old Captain's qualities in the young man. Their new-found friendship serves to ease his passage, and teaches the young man a great deal, too. The other three stories are the editor's, a bright new talent in fanfic. "Chance Encounter" and "The Secret" are little more than vignettes, sidelights to the regular life on the E, but "Spock's Grain" is a fully developed and entertaining sf story in the best of tradition, along with some leavening humor. Kirk, Spock, and the E specialists have to determine why the quadrotriticale is running wild on Daris IV, uprooting houses and crowding settlers into a tiny area, indeed threatening to force them off the planet in its exuberance to grow. The mystery is described and solved with wit and grace, though I personally regretted the choice of the villain! A good finish to a bright new zine. This, back issues, and further ones now available: SASE for info.[8]

Academy Chronicles 7 was published in 1979. It was edited by Kyym-Suon & Jane Freitag. 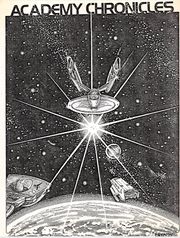 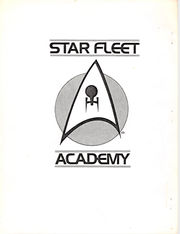 Issue #7 is like issue #6, only without any particular story to recommend it. Again, Ellen Kozak's story here, 'The Tattletale,' is the best of show, but though well-written it is fluff: 8 and a half pages for Kirk to discover a pet on board. Almost better is Johanna Cantor's 'The Captain Minds the Store,' a post-Amok Time wrap-up. Jane Freitag's 'The Slip-Up' is a pretty standard torment story, using a standard torment plot: the nasty unbeatable alien glorps out the landing party one by one before Kirk's eyes, and then... and then... why, Kirk wakes up, of course! Tack on the O. Henry tease tag of coming-into-orbit-of-the-planet-you-just-dreamed-about-Captain, and there you are, nothing we haven't seen twenty times before. Freitag has talent for her things flow well; unfortunately, so far she has not evinced a lot of originality.[9]

I finally retrieved Academy Chronicles #7 from a friend and have decided my favorite piece is Johanna's "The Captain Minds the Store". The few sines I've read do pick up on that episode a good deal, hut each story is so different. [10]

Everyone loves their Academy Chronicles #7, but that's to be expected; in our club we don't buy zines unless they're good! The zine was great! (As per usual) Exellent stories all around.[11]

I picked up your zines #6 and 7 at 2-Con, and want you to know how impressed I am with them. Of course I will always fuss about the wasted space as in the exorbitant amount showing in Johanna's story in #7, but perhaps you had a good reason like an uncontrollable typist or something. Jane Freitag's and Ellen Kozak's writing skills are to be envied, and I enjoyed every moment of them. Anyway, this is one of the very best local club zines I have ever seen—and I buy almost all the ST zines—and I certainly do want future ones myself. And past ones, too, if still available.[12]

#7 continues much the same as its predecessors. It has good stories, good artwork, though not enough and especially good poems. There's another poem of mine in it, but A.C. is recommended anyway.[13]

Academy Chronicles 8 was published in 1979 and contains 49 pages. It was edited by Joei VandenBerg and Kymm-Suon. The art is by Mary Lynn Skirvin, Jeff Anthony, Paulie Gilmore, Keith Drea, and Kyym-Suon. 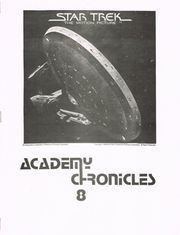 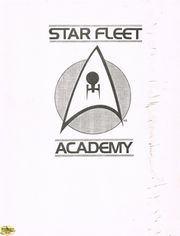 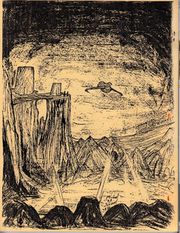 back cover of issue #12, Michael A. Scheissel 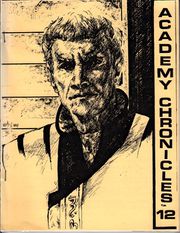 The editors thank Peter Little for the use of his Epson QK-10 computer.

Academy Chronicles 13 was published in 1985 and contains 67 pages. It was edited by Rosemarie Eierman. It has art by Susan Meinecke, Michael A. Scheissl, Sharon Fuchs, Ginny Thorn, and Richard A. Eannelli. 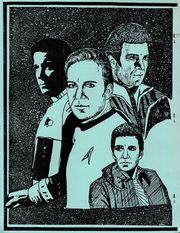 back cover of issue #13, Susan Meinecke 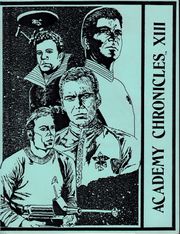