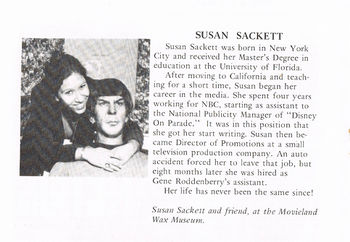 a 1977 photo printed in the 3rd Space-Con program book, it portrays Sackett and a wax figure of Spock 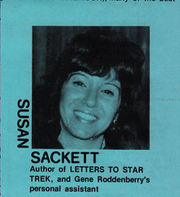 image from a Phoenix Con flyer in 1977

Susan Sackett is a Star Trek fan who was also Gene Roddenberry's personal assistant for seventeen years. Sackett was also his lover. She appeared at many cons and was a conduit between fans and TPTB.

She wrote LoCs to Interstat and a number of books, one of which was called Inside Trek subtitled "My Secret Life with Star Trek Creator Gene Roddenberry."

Of her relationship with Roddenberry, she said:

Although I felt somewhat used and left out, I was convinced that I was really a very lucky girl, to be here in this time and place. It was almost as if I felt a responsibility to the fans, to keep their hero happy. I was still in awe of this great man, falling in love with him, and I would have done anything to please him. And so, to paraphrase Queen Victoria’s suggestion to young English brides, I closed my eyes and thought of Star Trek. [1]

A Letter Sent to Halkan Council's Editor: General Thanks

Thank you for the copies of The Halkan Council. I have looked them over, and especially the letter that [name omitted] wrote, and enjoyed it very much. She said some nice things about me. I'm not sure where she got the impression that we don't receive fanzines in our office, but we've got quite a few. In fact, I have a whole filing cabinet full of them. Most of them Gene just has time to glance at since he is so busy. Good luck with your future issue. I'm sure they will be something to look forward to. [2]

In the August 1978 issue of Interstat, Sackett wrote:

It is my understanding that there exist, somewhere in fandom, fanzines with subtly and even openly portray a homosexual relationship between Kirk and Spock. No one who has written one has ever had the courage to send one to Gene Roddenberry's office. What surprises me is that no one has ever mentioned why these two apparently straight-appearing characters should be the only ones on board in this kind of relationship. Why, who knows who we might have fraternizing aboard the Enterprise. How about Sulu and Chekov? They sit together and see a lot of each other, you know. Or how about Uhura and Chapel? WIth Spock in heat for anyone (hopefully Chapel) every seven years, and and with no black dudes in sight for Uhura, what's to stop them from digging each other? Bones and Scotty? That leaves Yeoman Rand. YeoMAN. Get it? Even she's not too sure of her straightness. At last we know why there's such good birth control on the Enterprise. We already had the Gay 90's. This decade will probably go down in history as the Gay 70's -- and it has done considerable good in helping to at last recognize gays and to work for their liberation. They just weren't created as gay characters. Why try to change them?... Good Star Trek Fan literature should be accurately be BASED ON STAR TREK. It's only logical. These comments reflect my personal opinion, not necessarily that of Gene Roddenberry or the studio. [3]

In September 1978, a fan wrote of a letter Sackett sent to a UK fan club president, one that commented on the debate about the acceptability of including K/S fiction in zines:

Some members have stated positively that they do not want to read any story in which either Kirk or Spock is stated to have homosexual leanings; or indeed any of the main characters, and on this subject Susan Sackett, assistant to Gene Roddenberry, stated in a letter to Janet dated February 27th - 'Gene and the executives at Paramount feel that this is harmful to the STAR TREK concept, since this was never the intention in creating the series.' [4]