Star Trekkin is the newsletter for the Star Trek Revival Association of Kentuckiana. There were at least seven issues published.

It was to have been published bi-monthly, and was available only to club members.

Star Trekkin 5 was published in March/April 1976 and contains an unknown number of pages. 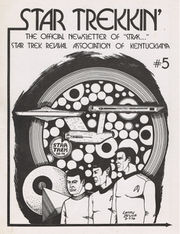 front cover of issue #5, Lenny Bruce
The editor mentions that it is "over a month late," which in the language and context of this zine, means it was mailed out in late May or early June 1976:

Welcome to our fifth issue of Star Trekkin'. It is over a month late, but we think it's worth it, and hope you will too.

As editor of Star Trekkin', I want to take this opportunity to thank everyone for their letters and kind comments. I have been literally deluged with mail, phone calls, etc., and have had little time to devote to the newsletter. Yet I spend as much time as possible with it, and those close to me know that is quite a lot.

Some people who have written to me have had to wait literally months to get a reply. It's not that I don't appreciate your letters, I am really thrilled to get them. But running a large Star Trek club of over 100 people, helping to organize a convention for the summer, and holding down a full-time job help fill my available time.

Star Trekkin 6 was published in May/June 1976 (but not mailed until August 1976) and contains 5 pages. The art is by Susan Young, Greg Murphy, and Lenny Bruce. 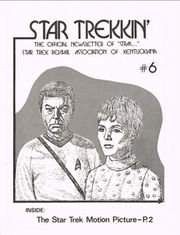 Star Trekkin 7 was published in November/December 1976 (not mailed out until mid-January 1977) and contains 11 pages. 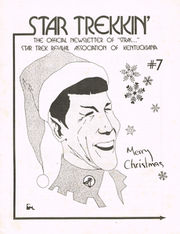 cover of issue #7, features a Smiling Spock as well as a Holiday Hat!
From the editorial:

This editorial was planned to be a screaming plea from a concerned fan over the fact that Star Trek is being killed.

Not by the networks or lack of interest. It is being strangled by ultra commercialization — the supreme ripoff of fans all over the world.

Paramount Studios has been licensing anything and everything it can to make its percentage bucks off of Star Trek. Star Trek toys, models, records, Mr. Spock on a parachute, comic books, magazines, books, candy, popsicles, pajamas, calendars, posters, jewelry, greeting cards, cereal bowls, space helmets, pictures, T-shirts, jackets, iron-ons, and probably a million other things I'm not aware of.

All this hurts Star Trek. It makes the average person sick of hearing about Star Trek. And so many trashy and overpriced products associate the name "Star Trek" with a ripoff.

But as I said, this started as a screaming plea. Something is being done, and concerned fans may rejoice at this belated but needed action.

In a letter to Star Trekkin', Gene Roddenberry said:

". . . Paramount Studios is at this moment in process of analyzing the whole complex of STAR TREK activities such as fan clubs, publications, toys, conventions, etc. Some of this was my doing since I finally made it clear to them they've let the thing get out of hand, and they should begin to cooperate with fans and conventions and other products while also offering some guidelines and controls which will prevent badly run things or actual fan ripoffs. So what 1 think will happen is that they'll be spending the next two or three months collecting information and coming up with some policies on the whole thing."

If this actually happens, it's just what the doctor ordered. Let's hope all goes as planned. This way "STAR TREK II" will have a fighting chance with the movie-going public when it comes out next Christmas.