From Fanlore
(Redirected from The Star Trek Concordance)
Jump to: navigation, search 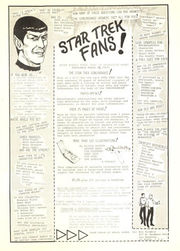 As stated in the Introduction, this Concordance covers the first two seasons of Star Trek (1966 to 1968), but we are promised supplements for other seasons.

Within this general framework , which quickly became clear to the viewers, individual adventures or episodes were written by a variety of authors, whose names are available in the Concordance. Assuming no pseudonyms, I count 39 authors or co-authors, the most frequently recurring of which are D. C. Fontana and Gene L. Coon with respectively seven and nine script authorships attributed. We might expect this wide range of authors to fly off in all directions like sparks from a grindstone, but the general framework of the series. presumably with some editorial work by script consultants for the series has kept the adventures channelized enough not to offend the sensibilities of the enthusiastic viewers who have developed into fans of one stock character or another and who have object ed vociferously when one script or another has placed a favorite in a role out of character.

This generalization is not so true of the names used in the episodes, and that is our paramount concern here. The Concordance begins with solid material to replace the ephemeral flicks on the TV screen —a summary of each of the episodes, giving title, with a code identification usually pertinent initials (MT = "The Man Trap"), the"Star Date" fixing the time, the date of the initial airing, the the author, the names of any characters other than stock characters, and a list of other persons who appear and special names used, then a one-paragraph summary of the episodec For admirers of the series this part promises invaluable information. We are told that the data presented come from (1) audio-tapes of the episodes (evidently fans copied the words with tape recorders) (2) supplemented by script (a valuable source if you can get them), (3) the Writers- Directors Guide, and -4) some help from the Studio, Spellings were taken from the scripts.

Meanwhile the fans of Star Trek will find good help in this reference work as they await the supplement with the same data on the remaining episodes. [6]

If ever there was a book that fitted the description of containing more than one cared to know on a subject, this is it. Included are plot synopses of the episodes, each of which is followed by the cast, list of characters, and vocabulary. Fully half of the book is occupied with the lexicon, a painstaking listing of every conceivable character, planet, scientific term, etc, mentioned throughout both the live action and animated series. Both regular and guest actors are also highlighted, in addition to the production crew member. This large-sized edition (8 1/2 x 11") is pleasing to the eye as well as to the intellect. Reproductions of scenes from the animated series are interspersed throughout the lexicon section, and a gallery of fan art is very impressive. To refer to this as "fan art" is perhaps misleading, as the quality of most of the renditions are of professional caliber. Some works will be remembered from the original fan publication of the Concordance. The Concordance is a prime example of the lengths to which Trekkers will go to amass trivia. Originally a fan effort by Dorothy Jones derived from the live action series, the Ballantine version details all 18 animated episodes as well. The quality of Trek fans to not remain content with existing materials, but to create more for their imagination, is undoubtedly a significant factor in the realization of this book. When an answer is needed for a technical or trivial question, this is the source one should consult first. The few errors that have been discovered are usually so esoteric that only a grand master of trivia could detect them, and do not spoil the quality of the rest. [8]