Tribbles are a Star Trek: TOS canon invention appearing in the fan-favorite episode The Trouble with Tribbles written by David Gerrold.

Gerrold, utilizing either vague Paramount ownership of the term, or by official permission, was an early marketer of toy tribbles at conventions and through mail order.

Gerrold himself had a complicated relationship with tribbles.

One of the best ST episodes is "The Trouble With Tribbles." David Gerrold tells an interesting story about it in his book of the same name (Ballantine publishers). He discovered the tribbles were so similar to Martian flat cats in a story by Robert Heinlein that he was afraid he would be accused of plagiarism. He wrote to Heinlein who replied that the basic plot had been used before his book too.[1]

In 1969, Gerrold wrote: "... there are too many fans who have not realized that Star Trek is a broken promise, a vision of things that will never be. These are the rabid little trekkees who get excited at seeing a real tribble (damn it, it's only a powder puff!)." [2]

In either a crafty marketing move with Paramount, or a reflection of Paramount not covering all its bases (possibly both), David Gerrold temporarily got over this disdain and personally sold a lot of tribbles. From a 1972 ad in Star-Borne: 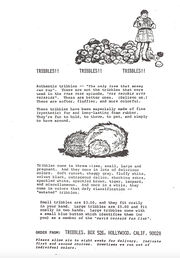 Tribbles are the exclusive creation of David Gerrold, and are copyright in his name. They were created for STAR Trek, and have appeared in "THE TROUBLE WITH TRIBBLES" (live action) and the forthcoming "MORE TRIBBLES, MORE TROUBLES." (animated) .

In 1973, Gerrold combined his tribble sales with yet another fan campaign, this one for Star Trek: The Animated Series, and by proxy, the possibility of a Star Trek movie.[3] From an extensive flyer by Gerrold:

We're trying to generate the biggest mail response in TV history [to encourage viewers for Star Trek: The Animated Series]. We need to reach 100,000 people or more... It's going to cost a lot of money, though, not to mention printing a paper costs. But we're not asking for contributions. We don't want to take your money without giving you fair value in return. That's why this letter is going out with an advertising packet. When you buy a tribble or a book, you're helping us cover the mailing cost to you, but to two other people as well.

I'd tell you what I think, but greed speaks for itself.[5]

In 2016, Gerrold explained that tribbles had their part of making him decide to stop going to cons:

I knew it was time for me to stop going to conventions when I showed up at one and there were thirty people selling Tribbles. You say to them, "You don't have the right," and they say, "Fuck you, you made enough money off Star Trek. Now it's my turn." This was the shift. In '72 or '73, you'd meet the fans, and they were grateful for the opportunity to meet people who worked on Star Trek. By '75 or '76, the attitude was "We own Star Trek now. The studio doesn't care. We do." [6]

David Gerrold, Do Tribbles Have Bones?

Not bones, but apparently a boner:

The results of a phone call to David Gerrold: "Tribbles do not have bones. They have cartilage...Or rather," he said, "they have *one* bone." The requirements of a G-rated Sig make it impossible for me to tell you where that bone *is*. I'm allowed to say that the bone is located somewhere in the area of "the boy part of the tribble." David declined to tell how you tell "the boy part" of a tribble from "the girl part". He does, however, say that filleting a tribble is very easy. He also implied that it was fun for the tribble. I hope he didn't say it just for the shock value. best, DED.

Fan Publications with a Tribble Emphasis