Monolith is a zine of fiction, articles, art, and interviews.

As of 1973, three issues had been published. 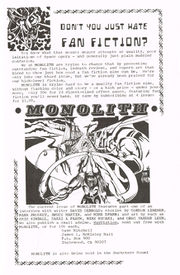 an ad in the 1973 Equicon program book

An ad published in "Monolith" for another zine series, "Space and Time," also had the hook of "hating fan fiction."

[From the ad for "Space and Time"]: You say you hate fan fiction?

Try an issue of SPACE AND TIME... It just might change you mind about the subject.

You know what that means: meager attempts at quality, poor imitations of space opera -- and generally just plain muddled confusion.

We at MONOLITH are trying to change that by presenting outstanding fan fiction, indepth [sic] reviews, and superb art that blend to show just how good a fan fiction zine can be. We're only into our third issue, but we've already been praised for our high level fiction.

MONOLITH is trying hard to be a quality fan fiction zine, without flashing color and glory -- or a high price -- under your nose. Only 30¢ for 24 digest-sized offset pages, featuring fan fiction you'll never hate. Or save by subscribing at 4 issues for $1.00.

The current issue of MONOLITH features part one of an an interview with writer DAVID GERROLD; stories by GORDON LINZNER, MARK PROSKEY, BRUCE MARTIN, and MIKE SPARR; and art by such as ERIC KIMBALL, SAKAI & PAAUW, MIKE HIGAKI, and GREG VANDER LEUN. We also publish a small adzine, WAYSTATION, sent out free with MONOLITH, or 10¢ each.

Whether the fiction in these zines pulled off this goal could certainly be debated, the definition of "fan fiction" is puzzling, as this zine appears to contain standard, intensely male science fiction writing not based on any other source material (other than emulation of professional sf writers.) 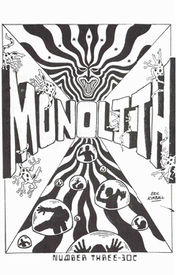 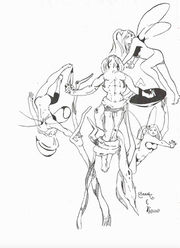 back cover of issue #3, Sakai and Paauw

Monolith 3 was published in April 1973 and contains 30 pages.

The front cover was by Eric Kimball, the back by Sakai & Paauw.

This issue contains a zine supplement, the first issue of "Waystation," also by Dave Mitchell.

This issue has lots of ads for itself, as well as several for things by David Gerrold. 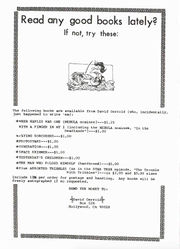 one of several ads in issue #3 for things David Gerrold was selling
From the editorial:

I FIRST "MET" David Gerrold last November, at a science fiction film convention in Los Angeles. He was there peddling his seven books, an assortment of tribbles, and a few other items I don't presently recall. I'd read only one story by him ("With a Finger In My I" in "Again, Dangerous Visions"), so I could hardly have been called a "fan" of his — in fact, I had made no decision whatsoever on his writing. But I must admit, there was a sort of fascination experienced in talking with him. I was speaking to the first professional writer I'd ever met (okay, maybe newspaper reporters count as writers, but they don't write SF....Then again, considering the strange things that happen in this world, maybe they do write SF; it's just of a different type, because they label it "truth".) Even when David didn't knov whether I was a reader of SF, or a (Omigod!) fan, he was still interesting to talk with. So, before the con was over, I'd finally bought one of his books. The name: When HARLIE Was One.

I started reading that book as soon as I returned from the con— I wanted to see if I'd been cheated. Well, I finished it in a matter of hours, and definitely and firmly became a David Gerrold "fan". It actually made me feel bad, reading that book. I mean, here was a guy who'd written a really great book, and I almost didn't buy it. (In fact, if it hadn't been for that fascination of buying it from the author, I probably wouldn't have, and, I wouldn't have offered to help him at EQUICON and he wouldn't have trusted me with his address and phone number, and I wouldn't have interviewed him, and you wouldn't be reading this, you lucky dog.)