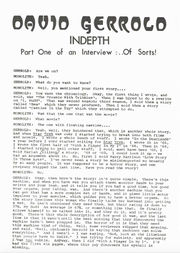 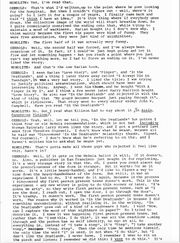 David Gerrold Indepth is an interview with David Gerrold conducted by Dave Mitchell, editor of the zine Monolith.

This is the first part of a longer interview; the second half was supposed to be published in the next issue of the zine. It is unknown if that issue was published at all.

At the end of part one, the editor promised that more of this interview would be published in future issues of "Monolith": "The David Gerrold Show will return next issue, with David getting into what he dislikes about fans (!), and maybe something about Star Trek (trekkies beware!)"

MONOLITH: Was that the one that was the movie?

MONOLITH: The one with floating castles...

GERROLD: Yeah, well, they butchered that, which is another whole story. And when Star Trek was over I started trying to break into both films and novels. I wrote a whole bunch of stuff. I wrote "In the Deadlands" a year before I ever started writing for Star Trek, I wrote it in '66, I wrote the first half of "With A Finger In My I" in '66. Then in '68, I started trying to sell other stuff, I sold, must have been '68, I sold Harlan Ellison a story, '68 or '69, I could look it up — we had an argument about it. No, first I sold Harry Harrison "Love Story In Three Acts", I've never seen a story be misinterpreted so broadly by so many people. It was supposed to be a horror story, and one reviewer skipped the last line. Have you read the story?

GERROUDi Okay, then here's the story; it's quite simple. There's this machine, and when you have sex you attach these monitor bands to your wrists and your legs, and it tells you if you had a good time, how good your orgasm, your rating, was. And there's another machine that you can get that has a more complex set of bands, and it gives little motor impulses to your muscles, which guides you to have a better orgasm. So the story involves this woman who finally talks her husband into getting a set. He isn't convinced they need them, but their rating is down to 37%, My God! An average is 67%, or something like that. He finally allows himself to be talked into it, and they do it, and it's pretty good. There's this whole description of how good it was, and the last line is that it wasn't until the next morning that they discovered the machine hadn't been plugged in. The horror of it is that they need this machine kind of thing. Well, some reviewers skipped that meaning, and said, "Well, obviously Gerrold is saying that machines can solve everything. And I wasn't — I was saying, "God, look at the illusions that people have to build." I was trying for subtlety, and apparently I was too subtle.

GERROLD: I sent Harlan "Love Story", and "Finger", and "In the Deadlands", and a thing I later threw away called "I Always Die On Tuesdays". It was a very bad story. I liked the title; I wss trying to justify political assassinations, which should have been an interesting thing. Anyway, I sent him those, and he bought "With A Finger In My I", and I think a few weeks later Harry Harrison bought "Love Story". He also saw "In the Deadlands" and rejected it with the kind of thing that "My gourd becomes buoyant just paging through it", which is ridiculous. That story went to every editor except John W. Campbell. Have you read "In the Deadlands"?

MONOLITH: No, but I read what Ellison had to say about it /In Again, Dangerous Visions/.

GERROLD: Yeah, well, let me tell you, "In the Deadlands" has gotten I think four or six Nebula recommendations, which is not bad, Including Norman Spinrad; Larry Niven likes the story, and I got a postcard last week from Theodore Cogswell. I don't know what he means, because all he said was "Discovered 'In the Deadlands' belatedly! thanks. Signed, Ted Cogswell," I don't know what he's referring to on that, and I haven't written him to ask what he means yet.

MONOLITH: That's gotta make all those guys who rejected feel like shit, hasn't it?

GERROLDi Well, if it gets on the Nebula ballot it will. If it doesn't, no. Also, a publisher in San Francisco just bought it for reprinting. It's a very strange story in that the, oh, I guess you could almost say the precociousness of the form is strange. But it works; for me it works. It's a little heavy-handed, and I'd like to figure a way to tone down the heavy-handedness of the form. But still, it was an experiment I had to do. I'd never do it again, because in the process I discovered why first person present tense doesn't work. This is the experiment - any new writer is going to do this sooner or later. "I'm gonna be arty", so they write first person present tense, such as "I see the door, I reach out, I open the door, I go through the door". It's trashy. It doesn't work. ' The first person present tense doesn't work. The reason why it worked in "In the Deadlands" is because I did something unconsciously, without realizing it, in the writing. "In the Deadlands" grew out of a kind of a nightmare I had. I said "Now, can I capture the mood of that nightmare on paper?"

GERROLD: No, [those stories] just flowed, 1 sat down and they just flowed out. They were almost like "trip" stories, getting past the "I will construct a story", and getting down into "I will construct an experience", or "I will allow an experience to occur". And that's what I was trying to do. In stories like "This Crystal Castle", I was attempting to do something, and nobody got it. I was trying to make a statement about religion being based on trust and faith; that faith and trust are basically the same thing. If you can't have trust on a one-to-one level, then you can't have faith in God anyway, and a couple other statements that there is no trust on a one-to-one level anyway, really, so why should there be any faith in God, or anyone who claims to be God? And it was a little heavy. I don't think anyone quite got it. But you see what I mean about posturing and pretentiousness, is trying to make big statements in little stories, instead of trying to take a little story and examine a little idea in it. But examine that little idea thoroughly. So there's where the novel When Harlie Was One came from. This was a short story about, well, I had some friends who were smokinq dope one time. A lot of dope. I thought, "Damn I They're going to rot their brains!" And I don't just mean grass - but I mean into some really heavy shit. And I said, "That's ridiculous".