Star Trek: The Animated Series ran for just over a year. The series used almost all of the original cast's voices (minus Walter Koenig), and animation allowed for more aliens and fantastical plots and sets. The animated series introduced a three-armed, three-legged, long-necked, alien member of the bridge crew, named Arex, and a cat-like alien crew member named M'Ress. 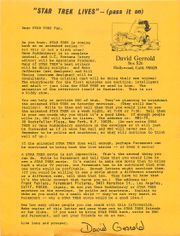 a 1973 letter by David Gerrold encouraging fans support the show by passing this flyer on to fan clubs and other places, to write letters

Although the show never caught on with all fans, many elements within it carried over into fanon and canon. Just a few:

The show was heavily promoted by fans and by D.C. Fontana in newsletters and letterzines, often accompanied by pleas to "give it a chance." One source of detailed info about the show is In Her Own Words: An Interview with Dorothy Fontana (1974).

A letter from David Gerrold in Star Trek Action Group #2 (June/July 1973) implored fans to watch the new show, saying "this is NOT a kiddie show."

See the transcription of a speech: I'd like to talk about STAR TREK, past, present and future, and I don't know whether you're going to like what I have to say. by D.C. Fontana.

See David Gerrold's 1973 comments at You have asked what you can do to help bring STAR TREK back on the air..

In 1974, Gerrold had a lot to say about this series in 2-5YM Interview with David Gerrold.

From Gene Roddenberry, an "Executive Memo":

With respect to the "new" STAR TREK, T think we should be careful that we do not get the wrong idea about the animated version. First, it is not aimed to be a "kiddies' show", although it will appear during the Saturday morning childrens' hour. I asked for and obtained creative control and intend to see it presented, within the limits of animation, as STAR TREK was originally presented in the evening. We all still believe that children are much more intelligent than generally assumed by the television industry and that the STAR TREK animation version should aim at the same quality as the original show.

Why are we doing it? First, we feel it will help keep STAR TREK alive and success in an animated version will only strengthen our chance of getting back on the air in the evening, or into the movie house as a feature release of STAR TREK. Next, the animation will allow us to do some special effects, characters and stories which are impossible in a live version. Finally, it is a source of income for the stars and other people involved in STAR TREK, all of whom would like to keep eating regularly while they wait for the original show to return to the air. Sincerely yours, GENE RODDENBERRY, Executive Producer, STAR TREK [1]

From an undated interview with David Gerrold, who contributed two stories to TAS:

Arguments about "canon" are silly. I always felt that Star Trek Animated was part of Star Trek because Gene Roddenberry accepted the paycheck for it and put his name on the credits. And DC Fontana—and all the other writers involved—busted their butts to make it the best Star Trek they could. But this whole business of "canon" really originated with Gene's errand boy. Gene liked giving people titles instead of raises, so the errand boy got named "archivist" and apparently it went to his head. Gene handed him the responsibility of answering all fan questions, silly or otherwise, and he apparently let that go to his head. [2]

I suppose "canon" means what Gene Roddenberry decided it was. Remember, we were making it up as we went along on the original series (and on the animated one, too). We had a research company to keep us on the straight and narrow as to science, projected science based on known science, science fiction references (we didn’t want to step on anyone's exclusive ideas in movies, other TV shows, or printed work). They also helped prevent contradictions and common reference errors. So the so-called canon evolved in its own way and its own time. For whatever reason, Gene Roddenberry apparently didn’t take the animated series seriously (no pun intended), although we worked very hard to do original STAR TREK stories and concepts at all times in the animated series. [3]

An Open Letter by "S.T.A.B. Paramount" Regarding a Proposed Boycott of All Paramount Productions is dated July 1973.

As far as the stories go, they are not entirely up to par with the original. A few resemble former episodes, and some take the crew to planets they have already visited. There is some kind of new monster every week. There are exceptions, however, and the 22 minutes of air time severely limits the story." She also points out that the Starfleet uniforms are the same, except that the men's trousers are grey instead of black and that the planet scenes are marvelous but the latter is due to the fact it's easier and cheaper to draw them than to build a soundset.

After reading about Gene Roddenberry's problems with Mr. Spock, I find it rather amusing/surprising that two other aliens should be introduced into the series. (I must admit that I would like to see Lt. M'Ress in a live action version.) I think that, with the live action series the actors were able to pull up a not very good story and make it at least interesting, but with animations this, is not possible. This means that the stories have to be good to start with; however in 22 minutes this is going to be very difficult to maintain. It would be very interesting if someone would write "The Making of the Animated STAR TREK" so that the problems and difficulties met with in the production of the live action and animated versions could be compared... From talking to people who are not STAR TREK fans as such but do watch the programme (yes, such creatures do exist!) I gather that the response to the animations has not been as good as the response to the live action version. However since my survey (?) was carried out while I was working in an office and most of the people I asked were female it could merely be the absence of William Shatner, Leonard Nimoy and the rest of the cast in the flesh! One thing which surprised me, I had read the "Log One' book before I saw the episodes and I was pleased by the way Alan Dean Foster had kept to the programme. What did not please me was the introduction by the original writer of several pieces of equipment which wore not in the original series. (Like the Bridge Defence System and the Life Support Belts.)

Way back in 1973 something happened that promised STAR TREK a whole new image and a whole lot of new viewers. Avid fans were already disgruntled because the best thing that had ever happened to science fiction on television had been pulled, despite all their efforts, and the news of this deviation shocked their already overburdened systems.

The gallant Enterprise and her noble crew were to ride again, albeit in a slightly different guise. Filmation Studios announced the new, animated STAR TREK - to a chorus of dissenting hisses!

No longer the slightly paunchy captain with care-worn features, or the 'lived-in' face of the cynical but much-loved doctor. Instead the well-known characters created by Gene Roddenberry were to be miraculously transformed into cartoon -characters by Filmation Studios, from which Batman, Superman, Aquaman and other delights of the wonderful world of cartoons had emerged.

Within the obvious economic limitations Filmation Studios claimed it made up for the limited animation (which it did at least admit to) by the quality scripts, voice tracks and art designs used. It was even suggested - somewhat rashly - that the cartoon might surpass the original, as there would be no patently fake studio creations representing alien landscapes.

A number of the most zealous "Trekkies" were so incensced at the idea that they launched numerous petitions and crusades to get the project taken off the air before it had even had time to draw breath.

But there were some consolations. Filmation Studios had had the good sense to engage William Shatner, Leonard Nimoy, Deforest Kelly and a large proportion of the original crew to record the voices. At least if you closed your eyes while it was on you could pretend it was the real Gene Roddenberry was engaged in a creative capacity "so as to ensure that the show is faithful enough to the original to satisfy the purists... Star Trek will be Star Trek, with only minor alterations. They dare do it no differently."

Many of the programme's original scriptwriters were engaged, with Dorothy Fontana as script consultant. They wanted to avoid the usual hackneyed drivel, - comforting in some small measure, I suppose.

So what was STAR TREK to lose? In America N.B.C. television had it slotted into the Saturday morning line-up at peak viewing time - 10.30 a.m. A lot of the violence that might have been in the original evening shows had to go - after all, we mustn't corrupt the children (who revel in blood and gore,) must we? And "Trekkies" were also told that there would be no real sex element to speak of either - same reasoning.

However, in spite of these "minor alterations," it would still be the same STAR TREK we all knew and loved, and not just another stereotyped kids' cartoon show to watch over cornflakes and the week-end papers. But alas, all these brave promises came to nothing. As far as most people were concerned, the twenty-two animated STAR TREK cartoons, which were screened in Britain in 1974, were a dismal failure.

The series was transmitted twice, except for three episodes; "The Magicks of Megus-Tu," "Bem", "Mudd's Passion."

Perhaps they thought the public might grow to like them the second time around! The British rights, once held by Paramount T.V., have since expired and thankfully there are no further plans to revive them. The cartoons have hopefully bitten the dust once and for all.

For in spite of all of the efforts to recapture the spirit and spontaneity which made STAR TREK a veritable institution in itself, there is really very little to commend it to STAR TREK fans.

What we are left with is not much more than a stereotyped kids' cartoon show, best watched with the television turned off!

As for my dislike of animated Treks, I admit it all began at an Equicon, when DC Fontana announced their existence by saying "their" (Filmation's) animation was superior to Hanna Barbera's et. al., which knowing damn well the reasons it was called "limited animation" in the first place, I took immediate and ever-lasting umbrage at it. Also, her insistence that they weren't "cartoons" but "animated episodes" rankled me no end as well. Hell hath no fury like a Bullwinkle fan scorned.