The Winged Dreamers, The Huntress, Survival and Tower of Terror by Jennifer Guttridge appeared in this zine.

Tricorder Readings 1 was published in fall 1971. On page 55 there is a note that the next issue will be out one week late, February 7, due to "Star Trek Con", presumably the First Major Star Trek Convention. This issue contains 92 pages.

Tricorder Readings 2 was published in December 1971. The front cover is by R. Marvinny, the back cover by Alan Andres, and the interior illos are by K. Hickey.

see reactions and reviews for Tower of Terror.

Tricorder Readings 3 was published in July 1972 issue contains 145 pages. It contains no interior art, but many tipped-in photographs, a lot of poems and very, very short pieces. Some larger pieces include "The Winged Dreamers" by Jennifer Guttridge, part two of Guttridge's Tower of Terror, a long story by Karen Flanery, and an article about Kraith by Jacqueline Lichtenberg. This issue contained applications for pen pals and round robins as well as a Fandom Handbook, "a club service." The editor writes that the next should be out in October and will contain about 40 pages. 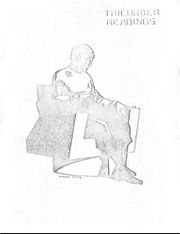 See reactions and reviews for The Winged Dreamers.

see reactions and reviews for Tower of Terror.

Tricorder Readings 4 was published in the fall of 1972 and contains 58 pages. 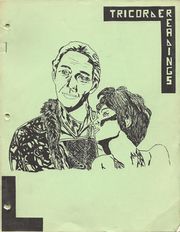 This was dedicated to the memory of Steve Ihnat, who had played Garth in the TOS episode "Whom Gods Destroy". Ihnat had died of a sudden heart attack May 13, 1972.

Marvinny had planned to dedicate this issue to Ihnat in any case. A survey sent out to members asking what features they'd liked to see came back with "guest stars" the overwhelming choice, and Ihnat the most frequently mentioned actor.

There was no evening, no sunset to his hours
Only sunny morning, saddened noon,
Just a vapour in eternity's passing shadows
That vanished in the sunshine -- too soon. -- Joan French

An issue of Tricorder Readings (actually says it's "#1, vol. 3", no year given) was published in Spring/Summer 1974 and contains 32 pages plus a supplement. Cover art by Charlene Taylor.

By now, the club had left the LNAF and was "the general fan club, STREK".

No editorial, no table of contents.

An issue of Tricorder Readings was published in fall 1974 and contains 45 pages. It has art by D.L. Collin, REG (front cover) and C. Taylor (back cover). 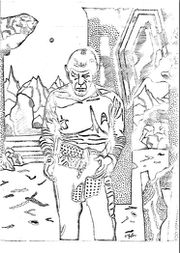 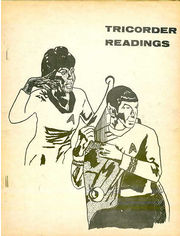