It contains fiction, but focuses on articles and commentary. This zine is an example of the cross pollination between the Star Trek fandom and the more traditional science fiction fandom.

Another one of the 'moldy oldies' but I know the editor personally, so I can't say much about it if I want her to let us use her mimeo. Well, it's a pretty fanzine. The covers are among the best I've ever seen. It's even kinda bound. They run more to articles than stories, however, in the new issue they are putting a few more stories than usual. I have a couple of favorites in the issues since my brother did a story and an article and co-authored a poem in the first three issue. Blood IS thicker than a critic's typewriter ribbon. They have fewer drawings than most zines and the tone of the zine is more of a 'quiet fanaticism' than wild-eyed trekkies. How's that for a non-committal review? [1]

Triskelion 1 was published in September 1968 and contains 70 pages. 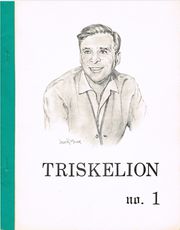 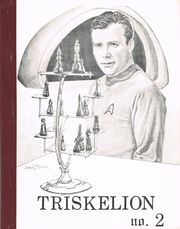 Triskelion 2 was published in December 1968 and contains 95 pages.

Triskelion 3 was published in May 1969 and contains 87 pages. 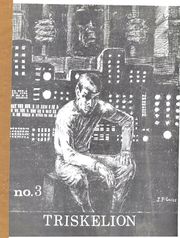 See reactions and reviews for Parted from Me. 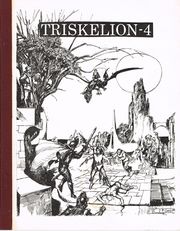 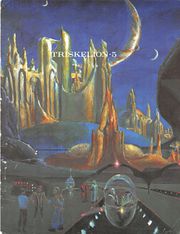 It has art by J.P. Griess, Hal Crawford, John Moffit, Doug Herring, J. Miller, and Kristina Trott, some of which is original to this issue, and some of which are reprints from previous issues.

In March 1975, the editor wrote in Pentathlon #3 about this last issue:

This is my pride and joy. However, it has been plagued by setbacks since November, I was planning on having it out by Christmas (a Christmas present to myself) but the typewriter I use for it broke and is now in Bryan with my parents (this is my ten dollar electric I'm using - hint; check your newspapers for notices in the public notice column of the classified ads. The government has sealed bid auctions of all manner of equipment. My friends and I have bought everything from big IBM typewriters to offset presses and 16mm projectors for under twenty dollars. Take someone who knows about the machines and go inspect the ones offered sometime. Some are beyond hope, but a lot of times they are just last years model or they have been replaced by a more efficient model.)

The first 20 pages of Triskelion are printed at least so keep heart. [2]