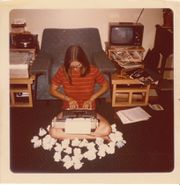 a fan/zine ed named Julia Howarth (West) typing up a Star Trek newsletter amid paper tribbles, 1975. "There is a new baby in the family. His name is Randy. He is grey, with green teeth and a great carriage. He typed the entire COMMUNICATOR. He is my typewriter, which I up and bought with $20 that should have gone to the electric bill!" [1]

A typewriter is a machine with keys that, when pressed, print letters or other characters onto a sheet of paper (or something comparable). The keys are each linked to individual pieces of cast metal type similar to those used in movable-type letterpress printing. When the operator (usually called the typist) presses a key, it strikes its piece of type against an ink-bearing ribbon, leaving ink on the paper in the form of the letter.

Initially, such machines were purely mechanical in action ("manual typewriter"). By the mid-twentieth century, electromechanical variants eased the typists' job ("electric typewriter"). In the 1970s and 80s, typewriter high tech was the IBM Selectric II with its crisp carbon ribbon and interchangeable font elements. Fans often named their typewriters and wrote brief essays or even light verse about them. By the end of the 1980s, however, typewriters were increasingly being displaced by word processors and personal computers.

Typewriters are still in use today in certain work environments, and are favored by some writers. Some bloggers type their work, scan it and post the scan, a practice called typecasting. Many children and young people like the vintage experience, the distinctive look of a typed page and the fact that a manual typewriter can be used anywhere. [2][3] The recent scrapbooking revival has caused a resurgence of interest in vintage and retro decorative styles. At least one company has produced a line of manual typewriters designed for use by scrapbookers. However, these machines may be more ornamental than useful. Enthusiasts recommend that newbies buy an older machine and have it reconditioned if necessary.

Typewriters have their own fandom. The actor Tom Hanks collects typewriters and has written a collection of stories about typewriters, Uncommon Type.[4] Among Hanks' humorous "Reasons to Use a Typewriter":

6. You take great pleasure in the tactile experience of typing——the sound, the physical quality of touch, the report and action of type-bell-return, the carriage, and the satisfaction of pulling a completed page out of the machine, raaappp!

7. If what you are writing is lengthy, the distraction of rolling another page into the carriage allows you to collect your thoughts.

10. You really want to bother the other customers at the coffee place.[5]

Hanks and other artists were featured in the documentary California Typewriter, about people who still use the machines and one of the last typewriter repair places in America. Musician John Mayer, actor-producer Sam Shepard and historian-presenter David McCullough are among those interviewed.

Typewriters can also be dismantled and the keys used to create jewelry[6], although typewriter fans strongly object to "key chopping" from perfectly good machines[7]. Artists and Steampunk fans are developing ways to manufacture replica or reproduction typewriter keys especially designed for jewelry and decoration.[8][9]

In April 2011, an article in the India Business Standard reported that Godrej and Boyce, "the last manufacturer of typewriters in the world", had shut its doors and ceased production.[10] [11] The Brother company in the UK stopped making typewriters in 2012.[12] However, it seems the reports of the typewriter's death have been greatly exaggerated.[13][14][15]

Examples of interchangeable font balls for the IBM Selectric typewriter, first introduced in 1961. Shown with €2 coin to indicate scale. Most fans are remembering the Selectric II. post-1971. These machines could cost anywhere from $500 (a bit over $3000 today) to $1000.

In Their Natural Habitats

One of the Birthplaces of Fandom

Much of fandom began in the typewriter era. Many fans simply referred to their machine as a "typer", occasionally as a "typerwriter", or sarcastically as a "typowriter." Here's a parody of the Vulcan greeting from Star Trek: The Original Series episode "Amok Time", showing that a fan and his/her typewriter are as one:

"Never and always...the endless sessions at the typewriter"
"Touching and touched... the stencils and typewriter keys"
"Parted from me and-never parted....money and the typewriter"
"I await thee in the- appointed-place-the-duplicating and the deadline..."[16]

Typewriters were sometimes a scarce commodity. Follow the plans of the editor Lori Chapek-Carleton of Warped Space and other zines:

[1976]: Gripes this ish [of Warped Space] are the difficulty of finding (on a campus the size of MSU [Michigan State University]) a decent typewriter. Suffice it to say this issue was typed on two different manuals and two different electrics. I apologize for inconsistencies of ribbon darkness, clarity, or readability. In some cases, we're using the typewriter under stealthy conditions, and I couldn't get a fresh ribbon." [17]

The top-of-the-line IBM Selectric, costing anywhere from $500 to $1000, was completely out of the question for most individuals. IBM made a nice little profit on the side by renting them out.

[1977]: T'Kuhtian Press currently rents an IBM Selectric typewriter on a monthly basis. I've just found out that for a downpayment and 23 monthly payments (which average out to something less than what I'm paying for renting the damn thing; anyway!), T'Kuhtian Press can buy a typewriter. I'm asking for the assistance of you, the readers' of WARPED SPACE (and THE OBSC'ZINE and THE FAN ZINE REVIEW 'ZINE). If you subscribers donate an average of $4.00 each, the total amount raised just might cover the entire cost of the typewriter! So please, I urge you, if you can spare the bucks and consider the investment in a T'Kuhtian Press typewriter a worthy cause, please send contributions to; T'Kuhtian Press [address redacted] before March 31, 1977. Money received postmarked after March 31, 1977 will be donated to STW (unless the sender requests that the money be returned), as will any excess funds raised. Each donor will receive after March 31, 1977 a complete financial statement on this matter and my deepest thanks. Renting a typewriter really bugs me—it seems like a waste of money, yet the typewriter is essential in the production of the ' zines. ... [18]

In With the New, Out With the Old

In October, the typewriter used to type some long-running zines was offered for sale. From the editor in Beyond Antares #24:

WANTED: Good Home for a typewriter. A brother electric, in it's case. Golf ball with four balls and a carton of ribbons (the balls are worth $28 each and the ribbons $6 each) — mostly carbon ones — about $100 ribbons. For $250. In good condition and recently cleaned, etc. (not used since) Must sell as soon as possible. If sent to a distance, train parcel costs to be added to this (approx. $8). This typewriter did all the offsetted issues of Chronicles and Beyond Antares and Eye of Newt, but we've brought this Apple IIE computer plus brother printer and now have to pay for them.

To the IBM Corporation, which fouled up four days running, trying to deliver the typewriter -- then delivered two typewriters in two days. [20]

For the benefit of the person who saw fit to write it and complain about the poor quality of the typeface in the last issue...those typewriter keys do not need cleaning. If you know anything about mimeo, and it's obvious you don't, you would be aware of the fact that with very old manual typewriters, the combination of that small typeface and the applied pressure of the keys when you turn it up for stencilling causes letters like o's to be completely chopped out of the stencil. The typewriter doesn't need a cleaning, it needs a replacement. Despite the fact that we are a 3-typewriter family, not one has elite typeface on an electric machine. [21]

Before the advent of word processors or home PCs and Macs, everything was a lot more work for the fanzine editors. All we had were our typewriters – in my case, first a manual portable, then a rented electric, followed by a rented IBM Selectric and, ultimately, my very own used IBM Selectric!... With a manual typewriter, the only ribbon available was made of nylon or cotton; it spun out and back on its spool several times before it began to wear out (i.e., the type got fainter and fainter). The improvement you got on an electric was that you could use carbon ribbons. These spun out only one time, so were costlier to use, but gave a crisp, clear black type that reproduced well by any printing method, but specifically offset. The crown jewel was the IBM Selectric, because not only did it use a carbon ribbon, but it had interchangeable balls – which gave you a choice of fonts, specifically and most importantly, script for your flashback scenes or italic for mental thoughts, or even just something you wanted to emphasize. You had a choice of about 6 or 8 "balls", or fonts, you could use. The most popular was Letter Gothic, a sans serif font that was very readable. There was, of course, the italic ball, or, if you preferred, the Script. There was one called Orator. It was also sans serif but it was a large type, used primarily when type was going to be reduced. And there were the old and common fonts like Courier and Elite. Having all these choices for type was a zine editor's wet dream, believe me! The little balls sat in their little boxes and you had to manually change them when you switched from say Letter Gothic to Italic type. A typist got real fast at changing them. [22]

I remember seeing a zine in the University of Iowa's fanzine collection with an editor's disclaimer explaining that during the reproduction process, she'd discovered that her typwriter key had struck the paper too lightly and the the letter 'v' appeared too faint to be seen. She and her collating party had to go through and add it by hand to every single word on every page in every issue of the 100 copies they'd made. And sure enough, written in black ball point pen, the letter 'v' had been meticulously transcribed."[23]

Gripes this ish are the difficulty of finding (on a campus the size of MSU [Michigan State University]) a decent typewriter. Suffice it to say this issue was typed on two different manuals and two different electrics. I apologize for inconsistencies of ribbon darkness, clarity, or readability. In some cases, we're using the typewriter under stealthy conditions, and I couldn't get a fresh ribbon."[24]

Email would have been handy! not to mention PCs - everything was written in longhand, then on typewriters, with three carbons. I sometimes marvel that our stories ever flowed or shone at all, given that in these days of WORD a first draft can be endlessly picked at it, changing a word here and there, polishing and editing and refining over and over - something just not possible in those days. Once you had typed it, it was done, no more fiddling, unless you wanted to Tip-Ex out the odd word here and there. I don't think those stories were any the worse for their crude manner of execution, and I'll always be glad I was there. [26]

Many zine creators named their typewriters, then word processors, and later, computers.

Even after the typewriter was replaced with the computer in daily life, typewriters played notable parts in the canon of several fandoms.