Hanky Panky is a slash Starsky and Hutch letterzine with occasional material from other fandoms.

this flyer for Hanky Panky was included in Between Friends #5, another SH letterzine

It was published February 1982 to June 1986, though its longevity is deceptive; there was a very long gap between the second-to-the-last and the last issue.

The title and some illos of this letterzine are references to the Slasher Hanky Code.

From the first issue: "HP#1 -- a letter/comment zine, non-profit in nature, dedicated to the pursuit of freedom of thought and speech... Subscription information: 1 issue, $1.50; 4/$6.00/USA. UK Subs SASE Terri. All contributions and other than UK subs to Michelle."

While slash was often discussed in S and H, "Hanky Panky" was the first specifically slash Starsky & Hutch letterzine.

One interesting note: While there is much use of the "/" (virgule in quote marks), the word slash is never used anywhere in this letterzine. That honor of the first fanwork were the word "slash" is used to refer to m/m content belongs to S and H. See Slash Terminolgy.

Many, many fans comment in letters that they had "to take a cold shower" as they read the stories and looked at the art.

This zine won an Encore Award.

In the beginning, the writers used just their first names and did not include their addresses. This began to change after about the first nine issues or so when some fans began to use their real names and addresses, citing confusion and the desire to communicate directly with each other. Some asked others to do the same, and requested that the editor print contact information. The letterzine never took a formal stand on the name issue, and left the decision in the hands of each contributor.

Like many early fan publications, the letterzine was published without any copyright notices and may, in the US, be in the public domain.

I never really enjoyed the style of HANKY PANKY (for those who haven't read this l/z, it was done in the mid-eighties (actually finishing as I was entering this fandom, so I never contributed to it) and it was a no-holds barred exploration of slash. People discussed openly all aspects of the characters getting it on and the stories were your basic rocks-off stuff. A little of that goes a long way, and when you're done with the romantic stuff, the more unusual begins to be seen. I was afraid of the genre going the way K/S has gone in recent years. (Fortunately, S/H has some of the best, most tasteful slash I've ever seen — that's why I'm still into it, folks.) HP also had stories and discussions of lots of other "slash couples", which didn't interest me at all.[1]

[First name redacted] takes us back some years with the reference to 'Hanky Panky'. I'm not sure that it entirely qualifies as a SH publication in the same way as, say, FRIENZ. There were doubtless good things in it but, apart from the correspondence, HP's primary invitation was: - write a '/' story. Just pick two characters and write a '/' story. Any two. Okay ... for anyone who wants to do it. But hardly central to SH. Light-hearted fun? - but maybe a little close to a somewhat mechanical, repetitive writing exercise. [Name redacted] comments, 'I never really enjoyed the style of HP.' Neither did I. Just too involved in one fandom, possibly. Whatever - I let my sub lapse. In my limited experience of it, HP never seemed like a SH zine. Perhaps it didn't mean to be.[2]

[Jen]: So I've spent most of my time looking at some letterzines and in particular one called a Hanky Panky. And I found that really fascinating from a historical fandom perspective because it appears to have been a zine shared among Starsky and Hutch slash friends in particular who were tired of not being able to have conversations about the nuances of Starsky and Hutch slash because they spent all of their time in the more mainstream zines fighting for the opportunity to even consider them as a romantic couple. Um, and so when you're starting from behind like that, you don't get into the nuances. So they created this separate zine and they were sharing a lot of topics... basically sharing their head canon. And although that wasn't a phrase used at that time about what Starsky and Hutch would be like, um, in a relationship how other characters around them would react whether or not they would, they, they put it as participating in the gay scene.

[Jen]: And no one replying really seemed to know what was being asked on that front. But it was fascinating in itself, especially to see how people in the early 1980s when the zine was being circulated, were conceiving of gay culture and, uh, the gay community. And particularly the gay male community when they were mostly women responding. Um, and so I found that really interesting. Um, there was a lot of good conversation about, uh, their head canon involving their families about how Dobie and Huggy would respond. Everyone's response on that factor was basically identical and it was that Huggy probably already knows they're together before they even get together. Also, Huggie's probably bisexual himself and Dobie loves them and wants to support them. But it was a little worried because of the complications of gay cops in the force, like every single person had the same reply.

[Rachel]: I love that everyone was united in correct opinions.

[Jen]: It's true. It's so rare in fandom. Um, it was also just a great historical artifact. There were a lot of clippings in the zine from gay magazines and newspapers, some of them just funny jokes, but others, there was an entire like guide to the Hanky Code at one point ....just pasted in there. And that's why the zine was called the Hanky Panky. All of the covers were some fan art making jokes about the Hanky Code with Starsky and Hutch. And I feel like fandom today doesn't really talk about the Hanky Code because it's not relevant. um...in 2017, but it's useful for any historical fandom if you're talking about historical, um, queer communities, particularly in the seventies and early eighties. It's nice to be able to see what people at the time were saying, even if they weren't necessarily part of these communities and you have to take it with a grain of salt.

[Monica]: I did like... I flipped through the first issue of the Hanky Panky and, um, they had a list of recommended reading with queer content. And I was just really chuffed that Left Hand of Darkness by Ursula K Le Guin was recommended on that list. I love that book. [3] 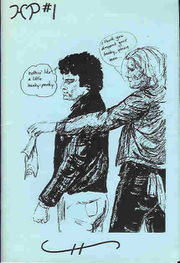 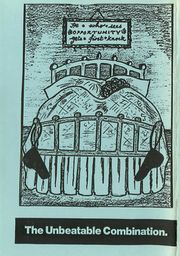 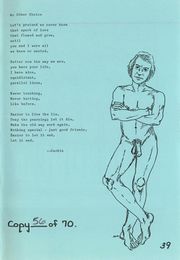 Hanky Panky 2 was undated, but probably published in May 1982 and contains 36 pages. The submission deadline was April 15. 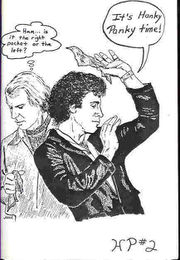 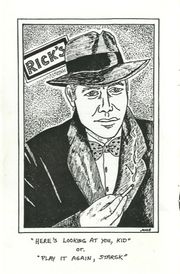 front and back covers of issue #2 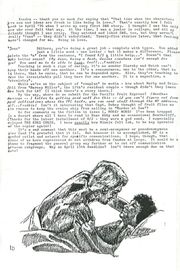 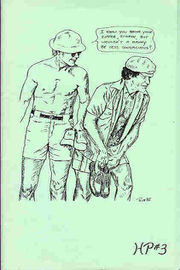 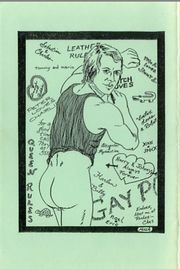 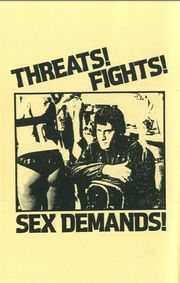 Hanky Panky 5 was published in December 1982, It contains 39 pages. 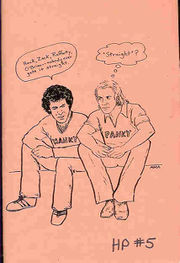 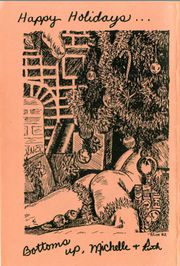 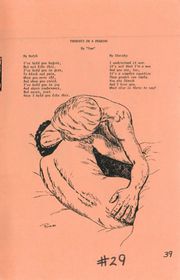 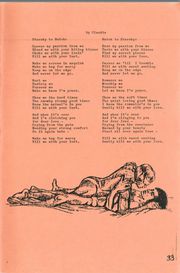 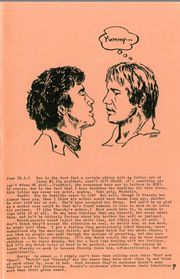 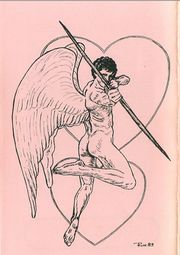 back cover of issue #6, Ruth Kurz, Starsky with Wings -- a fan in issue #8 writes: "That back cover is wonderful! My Starsky as Cupid - wish he'd shoot his arrow at me!" 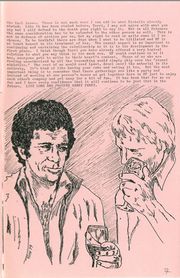 centerfold of issue #6. "Mutual games of bondage can be a lot of fun for both parties, Just as Marie's centerfold where Hutch was bound with silken cords didn't fool anyone into thinking he was helpless or unhappy, especially not with that smile on his face. That kind of bondage is quite appealing. " -- from a fan in issue #8. Note: This image has been marked as sexually explicit and has been minimised.

art from issue #6, some Simon and Simon art 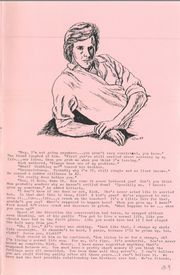 art from issue #6, some Simon and Simon art

Hanky Panky 7 is undated and contains 35 pages. It was probably published in April 1983, the submission deadline was March 25. 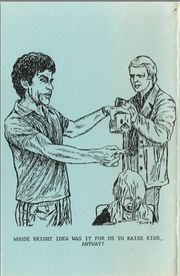 back cover of issue #7, parody of a scene in the TV movie, "Wait Till Your Mother Gets Home" 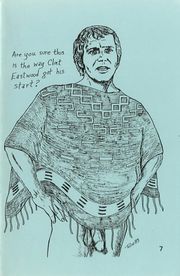 art from issue #7, Ruth Kurz showcases Hutch and his poncho 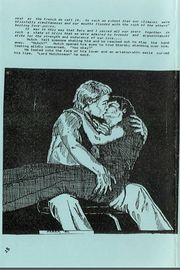 Hanky Panky 8 contains 27 pages. It is undated, but published in 1983, late June. It went out to 99 subscribers. Submission deadline was May 25. 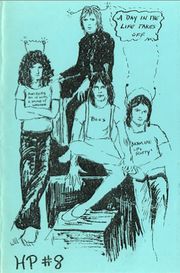 front cover of issue #8 -- "the crew of the spaceship BRIGHTON ROCK," perhaps coded members of the rock group "Queen" 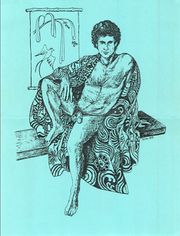 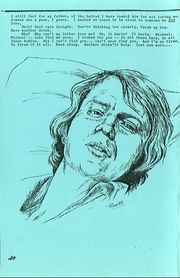 Hanky Panky 9 contains 38 pages. The art is dated 1983, the letterzine is not dated. Best guess: September 1983. Submission deadline was August 20. 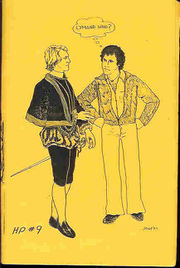 front cover of issue #9, Jean C. -- "Lymond who?" is a reference to The Lymond Chronicles 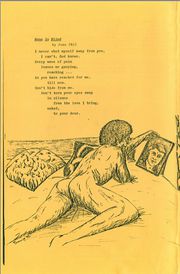 back cover of issue #9, Ruth Kurz 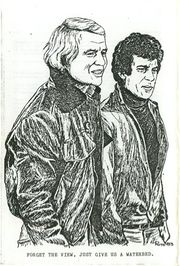 back cover of issue #10, Ruth Kurz

Hanky Panky 11 is undated, but one of the illos is dated 1984. One fan's letter was written "six days before Christmas," submissions were due January 4, 1984, and the cover wishes subscribers a "Happy Groundhog's Day," so February 1984? It contains 36 pages. 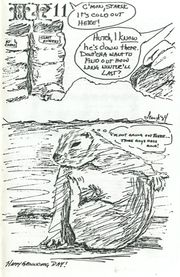 front cover of issue #11, "Jean -- that Groundhog's Day cover was the cutest thing, and I loved the 'sleet kicker' boots Hutch was wearing." -- from a fan in issue #12 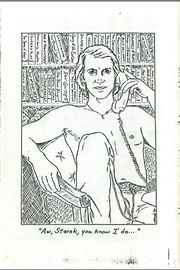 back cover of issue #11, Marie

Hanky Panky 12 is undated and contains 35 pages. The submission deadline was March 20, 1984, the centerfold has an April Fool's theme, best guess on publication date WOULD BE April 1984, but a fan in the next issue says it came out in May 1984. 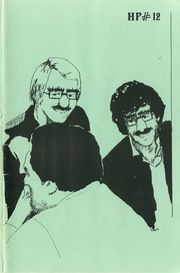 Hanky Panky 13 is undated and contains 28 pages. The art is dated 1984. The submission deadline was June 20. Best guess for publication: July 1984. 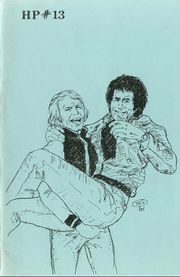 Hanky Panky 14 was published in June 1986 (possibly June 1985?) after a very long hiatus. The original submission deadline was August 29, year unspecified. The art is dated 1984. The letterzine contains 30 pages.

One comment that suggests this long hiatus was a planned one is by a fan in the previous issue: "Whew, I just made it. Well, if I'd missed a chance to write to HP in the 'lusty Month of May', I'd have had to wait another whole year." However, the editor gave no indication in the previous issue that there would be a long hiatus between these issues.