The Collected Starsky and Hutch Stories of Alexis Rogers 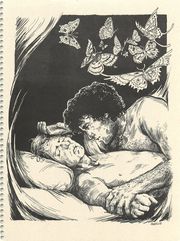 frontispiece by Connie Faddis -- it is the only art aside from some clip art, in the zine 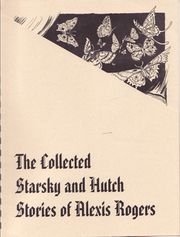 front cover, cut at an angle which allows one to see only the butterfly portion of the underlying frontispiece

The Collected Starsky and Hutch Stories of Alexis Rogers is a slash Starsky & Hutch 130-page fanzine. The frontispiece is by Connie Faddis.

It is the Earliest Starsky & Hutch Fiction Posted Online

With a certain amount of new interest in "Starsky and Hutch," both in the paper arena and cyberspace, I thought it would be fun to pull all the stories together and reprint them in a zine format. I had thought about putting the stories on the 'net but changed my mind after I spent some time exploring the fiction available at various websites and mailing lists. I am not comfortable with the lack of security and privacy currently in place on the 'net and so will not be placing my fiction in this environment -- at least for now.

In 1997, the author posted most of the zine's contents at what would become The Starsky & Hutch Archive, making it the first Starsky and Hutch fiction posted online.

The print zine includes this warning:

WARNING: This publication contains explicit descriptions of sexual acts between two men. (Cost of Love contains a rape scene.) If you are offended by this type of material, please do not purchase this zine or read it's contents.

From the Author's Notes: Print Zine

This project started several months ago when Elaine found a piece of one of my stories on her desk. While I was looking for the rest of it in the filing cabinet, I pulled out some other stories and read them. It was fun, like a trip down memory lane remembering the time in which I wrote these things and the special people who edited, published, and illustrated my stories.

As I've watched "Starsky and Hutch" fandom grow and become a stable part of fandom over the last twenty years. I am pleased to have been a part of the group of people I think contributed to some of the best fiction ever written to the fandom library.

"Starsky and Hutch" is a love story about two men who happen to be cops. When I watch the show, I see that love and the tests that go with the love. Hutch appears to need Starsky to prove the love over and over because I'm not sure Hutch ever believes it can be real, whereas Starsky knows from the first moment that the love they share is real and something he wants forever. He still gets angry and still pushes Hutch, but the love never wavers.

The only other aired television show that I've seen come close to S&H is "Wiseguy," which actually takes the relationship, on screen, to a higher level. What is it about cops that makes for good relationship adventures?

"Cost of Love" was my first endeavor into the world of slash fiction and I had not planned for it to be anything but the story of Starsky and Hutch in Vietnam, the war being a more important issue for me than any type of sexual relationship. However, Starsky had other plans and since it was his story, it was told at his direction.

See reactions and reviews for After the Ping Pong Ball Bounced.

See reactions and reviews for The Butterfly Bush.