Daily Reports is a gen Starsky and Hutch fanzine.

While it was meant to be a monthly zine, there were only two issues: February 1981 and September 1981.

In S and H #22 (June 1981), the editors said it had suspended operation until August 1981 due to family illness and personal issues. "Your subscriptions of 6 issues will begin then. Please consider #1 a sample issue."

In January 1982, the editor wrote a letter to fans:

Daily Reports was conceived, it was to be a showcase for previously unpublished works, prose and art; a starting place for the starting artist/writer. I received quite a few contributions at first, but nothing after the first two months. I have exhausted my entire supply of submissions and have only received one LoC on anything published -- and that was a section of the zine returned with no note or return address identifying the "offended" person. I can't write the zine myself. That was never the idea. If I wanted to write S&H fiction, I would do it and let someone else hassle with publishing. I wanted to give all those writers and artists who were "afraid" a place to publish their work. I seem to remember quite a bit of discussion in the pages of this publication concerning this subject. People who were afraid to submit to major zines for fear that someone would review their work and find it lacking, and subsequently rake them overthe coals for their inadequacies, real or imagined. Or, they were "afraid" to be placed in competition for space in a major zine with the likes of Bartlett, Aumerle, Barry, Mancinelli or White as they felt they had no chance against these seasoned writers. Artists were "afraid" to compete with Landon and Faddis and were crying for a place to illo stories where they would be judged on their own merits, as beginners, not placed up against professional quality the first time out. Funny, I haven't heard much from any of these "beginners"... I guess they weren't as desperate as I thought they were. Oh, well... [1] 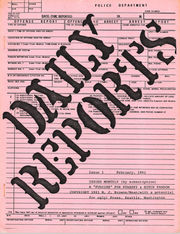 Daily Reports 1 was published in February 1981 and had 15 pages.

A fan in the April 1981 issue of S and H thanks the editor for the zine but comments: "Never realized that the first issue was going to be so skinny!"

Daily Reports 2 was published in September 1981 and had 18 pages. It has the subtitle, "A 'Funzine' for Starsky & Hutch Fandom." 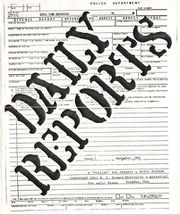 The back page: "Daily Reports" Published by Mean (with a potential for ugly) Press... M.J. Browne, Editor. All rights revert to authors upon publication, artists, too. Some things used without permission. Sorry about that, Uncle Issac."

Well, here it is. Bet you thought you'd never see this little rag again. There were times —lotsa times— when I had that same feeling, but here it is. Oh, I said that. On to other things.

Thanks to Teresa Librande and Cheryl Newsome for their artwork. This depletes my entire supply of art for the zine, with the exception of the pics I've clipped from old magazines, so get busy out there!!

As you should knov; by now, we're changing our name in November. No more Daily Reports. CODE: 220 will be the same old stuff, but reduced in size, probably like this issue. Thank you [name of a business redacted]. What they don't know, don't cost me nothin'!

October's issue will be to you around the 20th or so. I'll try to get the thing typed by the 18th and printed by the 20th so I can mail it. You'll have it by Halloween at any rate. We'll be giving you some information about the long awaited (yawn) short story contest and the prizes (nifty loot, guys!) so stay tuned for that. Also, we'll also have a story by Libby Jones, which is tres appropriate for the season, and an article by Dyane Kirkland. That, plus the usual recipes and stuff. Should be a fun issue.

And now a word a word about LoC's. I didn't get one little one... For a group comprised almost entirely of DOB's, you're sure a quite bunch. I'll print all that are fit to print, but they must have your name and complete address, and I must be allowed to print the same. They gotsa be legible, too.

Well, guess that's all I can think of this time around, except to say it's good to be back, and to thank all of you who sent letters of encouragement during the dark times. Love you all. Dyane and I are really looking forward to seeing all of you at Z-Con. We'll post a notice with our room number as soon as we get there. Please feel free to drop in as long as the door is open. If it's shut, we're either not there, or we're asleep (which isn't very likely, is it?!). We may have our VCR in our room, but plans haven't firmed up on that yet. It's VHS format and we'd be more than willing to copy tapes for people who have something to trade. We can go BETA to VHS, too. Drop a line and let us know what you'd like to have and what you've got to trade and we'll get back to you within 2 days with our list of goodies. The copying will be on a first come, first served basis and WILL NOT GO ON 24 HOURS A DAY!!! (probably). We will not be showing episodes unless we're cloning, so don't be disappointed if you come in and SUPERMAN is on the tube.