interior art from issue #9, Kendra Hunter, "They're coming out of the closet in droves. AND WE LOVE IT!"

S and H (spelling based on the first issue) is a Starsky and Hutch letterzine with varying editors. There were thirty-eight issues in all and ran from June/July 1979 (a month after the show ended in the US) to January 1983. The editors had a policy of printing every letter received and printing them unedited.

In the beginning, all of the letters to the letterzine were gen. When slash appeared on the horizon, and became a major subject, it was also discussed in an often-heated, non-explicit way. The first, true slash letterzine, though, was Hanky Panky.

This zine won an Encore Award.

Subpages for S and H (Starsky and Hutch letterzine):

Some Comments Illustrating a Wide Range of Discourse 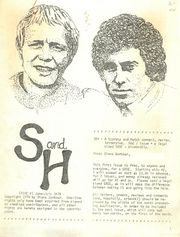 The Birth of a Fandom

S and H is notable for many reasons. One, it began just as the show ended and documents the very beginning of a brand-new fandom. Two, slash in Starsky and Hutch had so far existed only in drawerfic, and few readers seemed to have seen, or admitted to seeing, any. Slash fiction zines didn't become available until a year or so after the letterzine's first issue.

Within the letterzine, one can see the very beginnings of a zine culture, one that pre-dates personal computers and civilian Internet access by a decade and a half. (Amazing as it may seem, zine culture—with letterzines such as those circulated by the Amateur Press Association—has been around since the early 1940s.) Readers, as with the letterzines of the time, had enormous patience, waiting months between writing a letter of comment about a story they'd read, hearing about a con they didn't go to, and sometimes just saying 'hello' to a fellow fan.

Common topics of conversation were how to review a story, speculation the characters' religions, was Kira a bad girl, were Starsky and Hutch sexist, would Starsky and Hutch both remain on the force after the episode 'Sweet Revenge,' what kind of a car would Hutch get next, the beauty of two (most readers would say straight) men touching and willing to die for each other, complaint about the sameness of story plots (despite the fact there were probably less than 100 stories written at the time), and of course, slash. In fact, it was pretty much what Starsky and Hutch fans talk about today.

There were a number of different playful subtitles applied by different editors. "Letterzine" was sometimes changed to "Litterzine." "Snarlzine" was added at least once. "Scrodsky & Wretch" was substituted for "Starsky & Hutch" as well. One issue joked it was "a Letterzine for dedicated trading stamp collectors."

While slash was often discussed (and always in a non-explicit way), the letterzine wasn't technically a slash publication. It was simply a forum for discussion. Readers, many from Star Trek: TOS fandom, were wary, and weary, of the rifts that slash had created in the ST fandom. There were countless pleas, warnings, and pats on the back that S and H would not approach that level of acrimony. This was, perhaps, a bit of wishful thinking, as there was much heated debate, civilized and often otherwise.

While the symbol is by far the most utilized, there are exactly three instances of using the word "slash" in this letterzine. 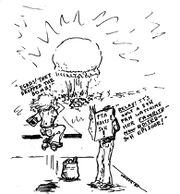 from issue #9, the artist, Joy Mancinelli, has a comment about syndication and editing:

"Egads! They dropped the bomb."

"Relax! It's only a S+H fan watching her favorite now edited S+H episode!"

At some point during S and H's publication, the editors[8] began to include separate RPS stories. They were printed separately from the regular white-paged letterzine and enclosed in the envelopes of those fans where were interested. See Purple Pages for more information.

Letters sometimes got so heated that one of the substitute editors suggested in issue #17 a form of "modified censorship," putting some topics on temporary hiatus, might be a solution. Readers in subsequent issues tended to agree things had gotten out of hand, but did not want any sort of censorship. Instead, various editors and readers asked for everyone to be more careful and tone down the rhetoric and personal attacks, a suggestion that was, more often than not, disregarded.

"When I worked with [D B] on the beginnings of S&H, we had one hard and fast rule: print everything. The only letters that weren't were the ones that said in essence, "Here's my money, send zine.' Letters were printed that fired controversy, hurt some feelings, opened some eyes. They were printed in their entirety, often without corrections -- some corrections spelling and grammar would have changed the tone and feeling of the letter. S&H has been a completely open forum, even when we who were editing heartily disagreed with the contents. It was always assumed that the readers and contributors to S&H were mature adults who were able to deal with others' opinions in a civilized manner."

"... a word about censorship. We hate the idea; the very word makes my skin crawl. We don't want to practice it - we want you to. A little self-censorship, that's the idea. There's nothing wrong with disagreeing with someone; there's nothing intrinsically evil about an argument or a debate. But let's keep personalities out of it, ok? "I disagree because your facts are wrong" is a lot different from "I disagree because you're a scumbag." It might also be a good idea to hold off writing for a day or two if something in the letterzine really pisses you off - give yourself a chance to cool down." 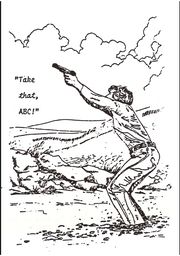 Talking back to the screen: from the Starsky & Hutch zine, Zebra Three: Starsky takes on the networks, "Take that, ABC!"

We want to accomplish two things during our sojourn with the letterzine. First, as Jean says, participation. We're a pretty active fandom - most of us write, draw, edit, publish, or something (many of us do more than one) - but there's one thing we can all do, and that's write letters. We need this letterzine - it's a large part of what keeps us together, and if we let it die through lack of participation it could well sound the death knell for fandom. So, all of you, write! The second thing we want to do is enjoy ourselves - and we want you to enjoy yourselves, too. It's a well-known fact that the three of us are crazy as loons anyway, and we intend to have fun with this. We're not going to take it too seriously - so don't you. It is, possible to take your own writing/drawing/whatever quite seriously, and still have a good time. Fandom is for fun, after all... Three rules: 1) Deadline is the 20th of the preceeding month; we'll make an exception for the February issue only - it's deadline is Jan. 25. Letters arriving after the 20th (the 25th for Jan) will be bounced to the next month. 2) Two-page limit - your letter stops at the end of two pages, period. 3) This is a Starsky and Hutch letterzine - says so right on the cover. We'd like to keep it that way - not HSB, not Trek, not Soul and Glaser. We'll print factual notices of births, marriages, upcoming jobs and so on, but other than that we'd just as soon keep the actors out of the letterzine, ok? [9]

The service we provide in the areas of zine listings and Wants and Warrants is limited to whatever editors, publishers, and readers send us for publication. We do not solicit ads. We are NOT a forum-type publication and have no intention of ever becoming such. KathE Donnelly and Joyce Thompson already provide this service and do an excellent job. We see no need to duplicate that service... The S and H letterzine is a casual collection of letters, reviews, columns, artwork and S&H related material available for sale or trade. It is not an official institution around which fandom revolves, nor will it ever be. This letterzine is not the power structure of this fandom that some have suggested it is. We refuse to accept the honor that some wish to thrust upon the letterzine as official decision-maker on whether a zine is published or qualifies for any kind of award... Due to the volatile personalities in this fandom, there are many items which are not given to us for publication because of who we are who we are. Perhaps there is root in our fandom for an official publication of some kind--but we are not it and have no intention of ever being an official anything. But the kind of power that could be given to such an official publication frightens us and we wish to have no part in any such official operation nor do we wish to see this fandom encompass such and idea or structure.[10]

I got out the box containing all the old l/z's — disinterred it, to be more precise/ from the mountain of boxes at present lurking in our spare bedroom—just to refresh my memory. And several hours later, I surfaced amazed. What a vast amount of subjects were covered—so many views aired (sometimes forcibly, sometimes acidly, sometimes even vitriolic), so many opinions, ideas, discussions, often on the mast trivial of subjects. Looking back, was The Kiss in the Alley (or lack of one) such a big deal? I suppose it was, at the time. And S/H, far from being the Love That Dare Not Speak Its Name, nowadays rarely shuts up.[11]

Editorial duties returned to Kendra and Diana for issues #33/34. While they planned to continue publishing (and had even announced the deadlines for submission for issue #39), issue #38 was the last. Kendra explained a year later in the follow-on letterzine Between Friends issue #3:

When [S and H] returned to us, the contents were such that both Diana and I felt the only action that would remove the problem was the death of the letterzine. This was not an easy decision, but one we felt was right, and we still feel—after all this time--that it was the only possible solution.