A "scrod" was the creature in the trash-masher in the original Star Wars. [1]

Scrod was popular in-joke among some media fans in the mid to late 1970s. [2]

It began when several fans, one of them Paula Smith, were perplexed by the offering of "scrod fingers" on a menu. [4] [5] [6]

Next comes a section devoted to (of all things) scrod - fingered scrod, yet. Scrod, for those of you who don't know what they are (my self included), are otherwise known as codfish. This section consists of a short essay on scrod entitled "The Meaning of Scrod in Modern Life" (M. Octyme), 2 poems "Homage to Scrod" (Paula Block), sung to the tune of "Ein Fester Burg," and "The Morass of My Mind" (Karen Klinck), sung to the tune of "The Windmills of Your Mind." There is also a short parody called "And the Scrod Shall Inherit" (Paula Block). I couldn't stop laughing after I read it. The parody intertwines both the Star Wars & Star Trek universes (plus scrods, of course) and it does so with hysterical results. [7]

An example of the difficulty of trying to translate specific fannish humor, even to supposedly other fans is seen in a review for Startoons:

The problem is that Startoons wasn't designed for fans. A fan has seen most of this before -- and much of it was better before the editing, re-drawing and re-writing. This book is designed for Everybody Else, closet fan to mundane. Yet at the same time, the readers almost have to be knowledgeable about all the major SF movies and TV shows of the past several years. Those who aren't will miss most of the jokes. Strangely, (or perhaps not) the part that seem the weakest are those most fannish. The Scrod, for example, suffers from an attempt to translate an 'in' joke, and becomes only marginally humorous as a result." [8]

In other words, you had to have been there...

The scrod jumped to at least one fandom, likely due to two reasons: there weren't all that many media fandoms at the time, and the scrod's main instigator was Paula Smith, who was a BNF in several of them. From a 1981 reference in the Starsky & Hutch letterzine, S and H: "The 'hush-hush' business in S&H is taking place because there is a scrod in the trashmasher. There are individuals not 'in' this fandom, but interested in gaining influence over it, who would dearly love to do so on the impetus of a "morality" crusade."

The Scrod in Fanworks 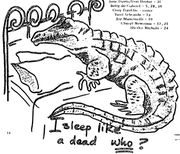