The publisher describes it as a "Trekzine focusing on the Enterprise personnel and their personal/professional encounters." 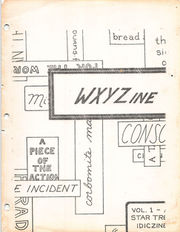 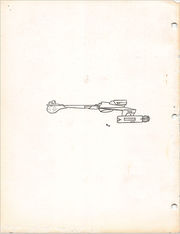 WXYZine 1 was published in March 1978 and contains 92 pages.

A more general note: of thanks goes to all the fine fen who have (often without knowing it) shown us by their example that it is possible to put out a halfway decent zine without charging a young fortune. The idea of losing mimeo occured last spring at SekWesterCon*Too, and various methods of insuring successful repro in that medium have been suggested by other zine eds. (Not to mention the A.B. Dick Co. — they are extremely generous with free advice.)

Now for a statement of editorial policy: this is an IDIC zine. That means we intend to try for as many diverse viewpoints as we can comfortably include between our covers. (Let's face it, folks — no one can be expected to handle all the ideas possible in fandom, but we are trying.) We do appreciate quality of craftsmanship in writing and drawing, but content is very flexible as far as we're concerned. And one more thing — as new fan writers ourselves, we are especially sensitive to the hopes and frustrations of other newcomers. We are anxious to find new talent, and willing to work with contributors to help polish their work. (Unless - hope, hope - it doesn't need polishing in the first place.) 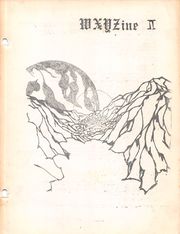 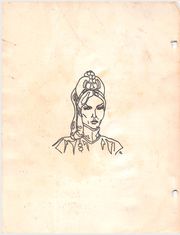 back cover of issue #2, Diane Scott
The editorial:

Hello again... Here we are. Only 6 months late, too... Berger's Law: Never-promise a publishing date until the stencils are ready to run off. Next issue: SOMETIME THIS YEAR. Don't hold your-breath, but we're hoping for midsummer. First off, I want to thank everyone involved in the birth of this second issue: 1- My husband Ed -- he puts up with a lot. 2. My parents, [names redacted], without whom this would not have been possible. They babysat, provided crash space for zine gofers, and fed all of us on many occasions. 3. Our contributers, of course; Alphabetically they are: Beckey Aulenbach, Dayle Barker, Jan Boll, Leslie Fish, Diane Scott, Harriett Stallings, Christine Thomson, and Susan Wyllie.

(Dayle Barker, by the way, is Dayle Palko, who recently has gone back to the use of her own name: Barker. Courage, Dayle, and thanks.) 4- The Angel of the Electro-stencils, Caro Hedge. Without her kind help WXYZine #2 would be minus nine pages, with illos yet. 5. Our Slavey Squad. The gofers principally Pat Long (suffering) and Cathy Czene, worked hard and tedious hours to get our zine launched.

The hazards of thish included artwork which had to be run by hand, due to large dark areas, which caused the paper to stick to the ink drum. Each page had to be peeled off separately. *SIGH* Also, the mimeo developed a taste for stencils and mimeo bond. It ate several stencils and quite a bit of paper.

We discovered that this tendency could be countered by running the Beast at slow speed, and holding in place the pin which supports the ink drum — otherwise it falls off and... you really don't want to know..

A COUPLE OF NOTES: Harriett Stallings, whose fiction we featured lastish and whose fabulous artwork graces our cover and contents (not to mention her poetry!) thish, has written a novel entitled "Labyrinth" — a thriller, with illos by various artists including Leslie Fish, Virginia Jacobson and H. Stallings. Romulan Press estimates publication date will be late summer/autumn '79. [1]

New Alliance, a novellette by Marjorie Robbins, is now in production and hoped to be ready by 2 Con in Lansing this May. A minimum of 50 pre-orders is needed to help defray production costs. Price is $3.50 first class/UPS; approximately 65 pp. plus illos.

PLEASE!!!!! WXYZine received a number of fine LoCs on #1, and we loved all of them. We'd like to hear from you, too. Our Lettercol was dropped this time due to a lack of space, but we look forward to printing at least two pages of letters next time — preferably four. (Personally, I am hurt... NOBODY sent in an entry to our story contest. *SOB!*)

WXYZine 3 was published in 1981. The front cover is by Harriet Stallings. Other art is by Nan Lewis, Susan Wyllie, and Guinn Berger. 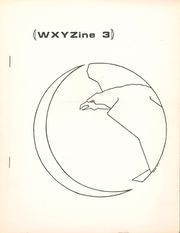 cover of issue #3, Harriet Stallings
From the table of contents page:

Note: Illo of Plassus appears with thanks to Della Van Hise, whose donation of a photo of said engelman was invaluable. ARTISTS PLEASE NOTE: One reason why WXYZine is so tardy is the dearth of artwork available. (Notice there are only three illos by anyone other than one of your humble editors.) Let's hear it out there (please?) -- who's willing to illo stories for Romulan Press? Huh? Anyone? Please?