From Fanlore
(Redirected from OddyCon)
Jump to: navigation, search 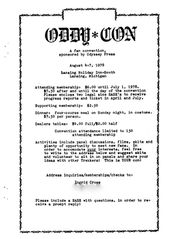 Oddy-Con was a one-time Star Trek: TOS con held in 1978 and sponsored by the publishers of the McCoy-centric zine, Odyssey. It featured an art show, a dealer's room, a trivia contest, a Saturday night party, a video room, and fan panels. The local television stations got wind of the event and sent a news crew to film the "gathering of Trekkies in Lansing."

According to a con report in Odyssey #3, there were about 200 attendees.

Nine months after the first glimmerings of a great insanity ("hey, Dave! Why don't we hold a fan con in Lansing?" "A who?"), Oddy-Con opened at the Holiday Inn-South on August 11-13.

Total attendance was close to 200 people (three-day total), and all went pretty smoothly for a first time. Friday opened a bit on the hectic side and somewhat sluggishly. People from out-of-state had been arriving since Thursday evening. (Several states were represented, from Iowa to New York.) Dealers began setting up and programming got underway. The Big Event that night was the Art Exhibit and a party. Saturday opened with a figurative explosion! Everybody who had pre-registered and some people who had planned to attend the cancelled Philadelphia con arrived. The dealers' room was hopping, the panels were moving smoothly. Saturday was also the day the press corps caught on to the "gathering of Trekkies" in Lansing. Two local TV camera-crews and the city newspaper reps arrived. The pre-con news reports had kept the Holiday Inn's phones ringing for information, and the evening news report on Channel 10 sent more Trekkers on our way. Saturday night was the day the Trivia Contest. Close to 40 people came to pit their knowledge against some 200+ questions. But they were clearly outclassed by a young gentleman from Canada with the fastest arm in the Northern Hemisphere! Tim Earle walked away with the first place trophy. Sunday was more relaxed: more panels, the dealers' room and the dinner (in costume) that night. Mark Gross (an aspiring and talented make-up artist) transformed yours truly into an ape! Most of the people from out-of-town left that night or early Monday morning.

The con committee thanks all the attendees for making our con a success! Special kudos to Mel Shreve for the Trek eps, all those who ran the panels, the dealers and artists, and the Burger King contingent of gophers. My personal thanks to Dave Goodine for nine months of encouragement, explanations of budgets and general aid when it seemed impossible. Thanks to Winston Howlett for pitching in and helping to keep things on an even keel. My apologies for not mailing out progress reports to the con supporters sooner-—things have been kind of bad these past few months. If anyone is interested in a copy of the con book, send a SASE to the address in the frontcover. We also have quite a few Oddy-Con buttons available for 25tf each and a SASE with 2 first-class stamps. [1]