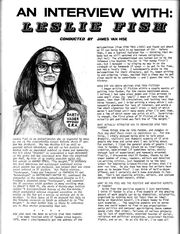 from A 1980 Interview with Leslie Fish, self-portrait by Fish

Leslie Fish is probably best known for her filksong writing and singing, but she was well represented in early Star Trek zines as well, writing columns for Interstat and other letterzines, writing The Weight Collected (an enormous gen Trek story, originally serialized in Warped Space), and writing early K/S. 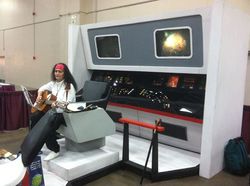 She has written hundreds of songs, including The Horse-Tamer's Daughter; Hope Eyrie, about the Apollo 11 moon landing; and Banned From Argo, about the crew of the starship Enterprise on shore leave. Her songs inspire strong, active emotions—outrage, joy, humor, or determination. 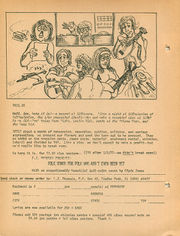 July 1976 ad for Folk Songs For Folk Who Ain't Even Been Yet, art by Leslie Fish, printed in Pegasus #1

She wrote her first filksong, "Fellowship Going South," in 1963, in the Lord of the Rings fandom. In 1969, Leslie began writing the filksong, "Hope Eyrie" (a.k.a. "The Eagle Has Landed"), which took six years to complete.

Leslie has recorded two albums of space and Star Trek songs with her band, The Dehorn Crew: Folk Songs For Folk Who Ain't Even Been Yet (1976) and Solar Sailors (1977), along with Carol Shuttleworth, which includes "Banned from Argo". Fish has received three Pegasus Awards and was elected to the Filk Hall of Fame in 1995 as one of the first inductees.

She usually attends filksings with a 12-stringed guitar named "Monster" and a large bottle of something alcoholic with a label that says "Bard Oil," and always has a knife on her, whether you can see it or not.

She published a zine of lyrics and chords for filk material named "The Incomplete Leslie Fish".

Her thoughts on Banned from Argo:

Song I'm least proud of: "Banned From Argo", no contest! I wrote it to order, to fill in a four-minute shortage on the master tape when we were recording SOLAR SAILORS, and hoo- boy, do I ever regret it! The damned piece of fluff became damn-near as popular as "Hope Eyrie". It's inspired a horde of filk-variations (which Random Factors has collected into a book, gods help them), got asked for at every con for years until I got so heartily sick of it that I refused to sing it again, and now it's inspiring spin-offs too. Arrrgh! [2] 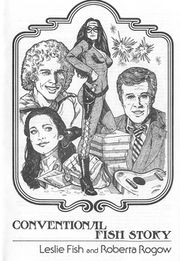 Leslie Fish as a self-insertion character in "Conventional Fish Story", 1984, from the zine Fantazy, artist is Barbara Fister-Liltz 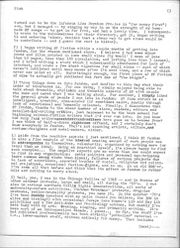 one page of an 8-page interview she did in 1979 with Jim Van Hise. Click to read

Leslie's artwork has been included on Fanlore with her permission.

Leslie answered a number of questions about her art in a 2007 article, Dribbling Scribbling Women: The History of Our Art. Some excerpts:

What kind of things do you try to express in your art? Beauty? Sexiness? A good likeness?: "[I try for] “beauty, sexiness and a good likeness, plus expressiveness... My drawings were always illustrations of stories, or at least poems, and I wanted to show the emotional tone of the written work in visual terms.”

Were you conscious of the difficulties of reproduction which choosing a medium?: “Oh yes! I had worked for a couple of newspapers and student art-magazines by then—remember, this was back in the days of mimeograph, ditto, xerox and at best offset printing—and I knew how crudely all of them reproduced. Back then you had to use strong outlines and very simple shading, or it simply wouldn’t reproduce. This gave fanzine illustration a cartoonish look, which I struggled to improve. I rejoiced when more fanzines began using offset printing, because the finer reproduction allowed for subtler lines and better detail.”

What is your favourite medium?: "“Pen and ink: black India ink, bronze Crow-quill pen-point, on Bristol Board. The smoothness of the Bristol Board allows for clean flowing lines and fine stippling, the flexibility of bronze Crow-quill allows great variation in width of line and size of stipple-point, and the stark black of India ink creates excellent contrast with the background.”

As a K/S Advocate and Writer

During the K/S wars in the late '70s-early '80s, Leslie was a passionate supporter of K/S, writing a column in Interstat and sending LoCs to other Trek zines of the time defending fans' rights to write K/S, and even taking to task those who didn't believe that Kirk and Spock were lovers. She wrote some of the first works that crossed the line from gen to slash.[3] Shelter, (published in Warped Space #20), is one of these stories. Her K/S slash is included in the ksarchive.com, as well as Foresmutters project.[4] She's also a writer of fantasy in several fandoms, and has collaborated with Mercedes Lackey on several projects, both filk and prose.

From Judith Gran at the The Foresmutters Project:

To appreciate what Leslie accomplished in K/S fandom, you have to hark back to the early days of K/S, when there were HUGE debates in fandom about whether K/S was possible, appropriate or "in character" for either or both of the two guys. The discussion was rarely, if ever, cast in terms of a "slash imperative": The question wasn't whether K/S was necessary, but whether it was a viable premise at all. Leslie Fish was probably the most articulate advocate for the K/S premise of anyone in fandom at the time. She persuaded not only through her stories, but through a steady stream of well-reasoned argument in panel discussions, LoCs and articles in genzines. In every fannish forum of the day, she laid out the conceptual groundwork for K/S. Her basic argument was that bisexuality is natural, that 20th century gender roles and sexual preferences are learned and can be unlearned, and that a sexual relationship between Kirk and Spock was a natural progression of the love and affection they plainly shared. Her logic of slash was not so much erotic as it was intellectual and scientific. It spoke powerfully to an audience of thirty-something middle-class women in the 1970s who'd grown up in a society where heterosexuality was regarded as "natural" and homosexuality was not. Leslie outlined an alternate framework for understanding sexuality. It was one that many fans shared instinctively, but Leslie articulated the reasoning behind it.[5]

I used to be a Trekker -- actually got my start in writing by doing stories and poems for Trek-zines (and of course, I made myself infamous there, too; I was the third writer to ever tackle the K/S theme -- Diane Marchant was first, with the story "A Fragment Out of Time", and Gerry Downes followed with "Alternatives", but my stories "Shelter" and "Poses" really shoved the theme into mainstream Trek-fandom, for which I got the expected flak) -- but I sort of lost interest when NEXT GENERATION came along; it's just too pusey, Yuppie-ish, and bloodless for my tastes. Hmm, I don't know if this counts as a hobby, but I like good SF/ST/adventure porno. Ghu knows, I've written enough X-rated Trek stuff to have a taste for that! [6]

In a letter to James Van Hise (editor of Enterprise Incidents) on June 6, 1978, Leslie wrote:

I've claimed from the first that the K/S theme was just as valid as any other theme for Trek writers to work on -- for the plain reason that there's nothing in the given parameters of the STAR TREK universe to oppose it. In fact, the aired-episode "givens" actually suggests it; There's plenty of proof in the episodes that Kirk and Spock love each other dearly, and I've seen no reason to absolutely disbelieve that this love couldn't be expressed physically. Most of us are conditioned by this society, from early childhood, to react with knee-jerk outrage to the very word 'homosexual'; we're taught all sorts of nonsense about it and bullied into being afraid of it when we don't even know what it is. It takes a lot of real-life contact with the subject to realize just how outrageously we've been fooled....We're finally beginning to realize (or admit) this, in the 20th century. Certainly people will grow up knowing better in the 23rd century -- especially after long contact with alien societies. With the medieval attitudes long gone, Federation society wouldn't have any objection to two usually-heterosexual males (or one usually-heterosexual and one usually-asexual!) having an affair with each other; it would be entirely their own business.[7]

The only objection [to K/S stories] I can think of on grounds of the characters' personalities is that Kirk is a bit nervous over his position as Captain (he's terribly careful not to cause dissension among his crewmembers, and having a lover in the crew might cause that -- in his opinion, anyway), and that Spock is painfully shy, ashamed of showing emotion (much less acting on it), and very fearful (with good reason) of his own sexuality. Then again, Spock's hangups about sex might refer only to the dangers of Pon Farr, or to particularly Human females; he did all right with Droxine, and with the Romulan commandress. In any case, these objections aren't that large -- more like interesting obstacles for a writer to deal with. There have been several good stories about getting through these obstacles: In Gerry Downes' ALTERNATIVE (the story actually began in the "Orion" story, in STARDATE UNKNOWN) a deep mind-meld used in a hurt/comfort background was enough to initiate the affair; in [Gayle F's] "Desert Heat" (SENSUOUS VULCAN #1) the precipitating incident was a simple Spock's-in-Pon-Farr-and-there's-nobody-around-but-Kirk (gorgeously done, though); in "Shelter" I used a straight hurt/comfort situation (WARPED SPACE #20); in Beth Hallam's "Green Plague" [8] (SON OF GROPE) they just realize that they've been in love for years, and quietly proceed to bed; in Frankie Jemison's "Aftermath" (OBSC'ZINE #1) it's Spock who wants the affair, and he admits it only after Kirk practically pries the facts out of him. There are plenty of ways around the few barriers, and Trek writers have explored several of them.[9]

As an Artist: Gallery

Ian McLean hosts, with express permission, a web version of Leslie's early illustrated work on the Andorians of Star Trek, A Summary of the Physiological Roots of Andorian Culture. It originally appeared in print in The Sehlat's Roar #2, edited by Randy Ash.

A Fan's Tribute: A Filk Song!