The Third Wheel is a Star Trek: TOS story by Connie Faddis. 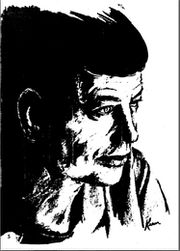 It was published in the print zines Contact #2 (with art by Trinette Kern), Interphase #4 (with art by Connie Faddis), and Computer Playback #2 (without any art).

While tending a badly damaged Kirk, McCoy has grown closer to Spock. Now, with Kirk mended, he frets over his renewed position as the outsider to his friends' friendship. It takes his own near-death from a malfunctioning sonic shower to convince him that he is a necessary part of them. Lovely angst and resolution.[1]

Connie Faddis' "The Third Wheel" starts off the tormented offerings of this issue. McCoy gets caught in the sonic shower and is injured; McCoy suffers torments following Kirk's bout with Vegan choriomeningitis. The story is well written and scientifically accurate, easily the best piece of fiction. Poetry is next, the straw that broke the camel's back. I would motion that a moratorium be declared on poetry about Spock, Spock & women, and the Kirk-Spock relationship. It has been done to death and these are no better than the rest. There are other characters and situations that can be explored poetically to bring new insights and fresher feelings. [2]

The stories in Interphase #4] themselves vary greatly... from pretty good to plain God-Awful. Probably the best is a vignette, 'The Third Wheel.' This one brings McCoy into the friendship and it is good reading even if not one of her classic efforts, but then I've never seen a bad Faddis work (well, okay... OTHER than 'Born Yesterday.') [3]

Starting off is an excellent story, 'The Third Wheel' written from McCoy's point of view, which captures well the deep-down feeling between McCoy and Spock that we all expected was hidden there somewhere. [4]

'The Third Wheel,' which examines the facets of the friendship between Kirk, Spock, and McCoy with wisdom and sensitivity, and the knowledge that it is an inclusive, not exclusive emotion, alone is worth the purchase price. [5]

And finally, fictionally, 'The Third Wheel' which is revised and reprinted from 'Contact.' I was shocked to think that she would reprint something old as opposed to something new. The story is enjoyable, and the art excellent, but... [6]

The first story in the zine is The Third Wheel, by Connie Faddis. It's...well, it's idfic. I don't think fans had any clear-cut concept or category of idfic at this point, even under a different name than "idfic," but it existed, and this story (or at least the first 3/4ths of the story) is it.

The best description of idfic I've ever seen comes from a comment on fail_fandomanon saying "Id fic is the anti-pretentious fic....Badly written or no, I'm still sitting there, slurping coffee, reading with wide eyes as my brain shoots up with mega doses of serotonin to reward me for reading EXACTLY WHAT IT WANTS, OH GOD YES." And oh boy does The Third Wheel fall into this category for the beleaguered McCoy fan. If I had read this story back in my teen years, I might have dropped dead from a spontaneous dopamine overdose.

It concerns McCoy angsting desolately to himself about being, well, the third wheel, in the trio, and how Kirk and Spock ignore him, and obviously like each other more than they like him, and are just putting up with him, and he thought he was making friends with Spock but Spock only cares about Kirk, and maybe he'll run away to Jackson Island to be a pirate and then they'll be sorry he should just leave so they don't have to pretend to be friends with some old grump like him anymore. Then the plot strikes and yada yada, misunderstanding clearups ensue. It gives me vivid flashbacks to when I was a preteen fighting ferociously with my second-best friend over who got to be our mutual best friend's One True Best Friend. It's a bit hilarious, but within the parameters of a teenage-girly idfic with an unsubtle axe to grind, it actually works weirdly well, mostly because it's a) short and b) all just McCoy's private overtired doubts which he himself tries to dismiss as silly - he doesn't go about actually putting these ideas into his behavior. More fodder for my long-held theory that there are very few inherently bad stories, only bad writers.

But that's just the first 2/3rds of the fic. It also follows Connie's pattern of both De Profundis and Mojave Crossing -- starting out good, and then somehow, magically, late in the story, something inside the story fuses and melts and transforms into something incredible and breathtaking and very different. And in the last conversation between Spock and McCoy it's no longer idfic but it's a pitch-perfect moment of connection, really sincere, meaningful, and just plain lovely. Like a plot twist, except it's not the plotline that gets twisted. An emotion growth-twist? A character-relationship-arc twist? I don't know, but the ending of The Third Wheel is the most heartwarming new thing I've read in some time. [7]

This is so wonderful, it really warmed my old Trekker heart. And the artwork is beautiful! Thank you. :) [8]

This story deals wonderfully with the angst you feel whenever the dynamics of a relationship are changing and you don't know where you stand. I think it captures wonderfully Bones' perspective (and also we get a glimpse of our beloved awkward Vulcan trying to feel his way as well). Thank you Connie for allowing some of your works to be posted. I LOVE the art as well. [11]

Fhhdzhdsgb9vpniczy5sugovuxu!!! I live for Spock's tender side making appearance! I love McCoy getting hurt and being saved by either of the rest of the triumvirate and I can't live without McCoy getting hurt is the trigger to them getting together! *pterodactyl screech* I love the way you combined all these aspects into this masterpiece! Thank you! [12]

I enjoyed this fic very much. McCoy thought that he was alone because his friends were together. Then he learned how important he was to them. [13]