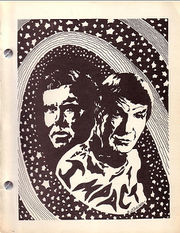 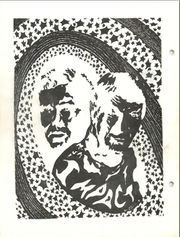 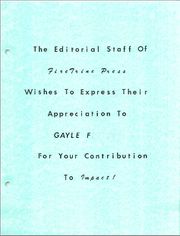 Impact is a slash Star Trek: TOS K/S anthology edited by Jean Hinson. It was published in 1985 and contains 188 pages. It has a centerfold fold-out drawn by Pat Stall of Kirk and Spock kissing and nude in bed.

In July 1993 in an ad in GAZ, Hinson wrote: "Out of print since 1986, there are 10 reprint copies available with the original 11 x 16 half-tones Pat Stall foldout. When they are gone, the master will be destroyed."

There were a number of heated personal statements submitted to the letterzines and adzines of the day regarding a falling-out between the original two creators, one of which ([J D]) allegedly absconded with funds. The remaining editor, Jean, explained the situation and thanked fans for their support.

The zine had a full-page thank you to Gayle F for her art.

It also had this dedication: "Vel Jaeger -- because it's really all her fault for getting us into this" and Sandra Gent -- who gleefully dug us in deeper..."

Editing a zine has been an interesting and often amusing pastime. Our inclusion in the infamous "Naked Doubles" flyer is one of the high lights of this strange but wonderful experience. Imagine our surprise, delight and downright pride in being slimed right along with some of the very best in K/S fandom - and IMPACT hadn't even seen the ink of the printers press yet! We would like to thank that author for the honor she/he/it bestowed upon us. We have dedicated our efforts here to two very special people: Vel Jaeger, known in some circles as Velly Jagged, who is single- handedly responsible for dragging Julie kicking and screaming, finger nails dug deep in the asphalt, into a fan club (horror of horrors); active Trek fandom (oh god, how juvenile); and K/S (my little female heart simply cannot handle that). Those dastardly deeds were accomplished with such gentle persuasion (systematic indoctrination) that Julie barely knew what hit her -- as usual. (Do you somehow get the idea that Vel is a 'pusher' at heart!) And to: Sandra Gent, co-perpetrator of a five hour long distance telephone call (Jean is still making payments on that bill a full year and a half later); custodian of the Southern California Trek Zine Lending Library; plaintiff in the six month long Gent vs Dietl custody battle over the possession of THRUST; the recipient of the WSF "San Diego Chicken" award - if you've ever heard Sandra laugh, you'll know why.

See reactions and reviews for Of Human Kindness.

See reactions and reviews for One Way Street.

See reactions and reviews for Diabolical.

See reactions and reviews for One Side.

See reactions and reviews for Sorcerer.

See reactions and reviews for Wish You Were Here.

See reactions and reviews for Discovery.

See reactions and reviews for The Third Day.

See reactions and reviews for Renaissance.

[Thaw]: This poem's simple imagery of cold and snow paralleling Vulcan repression of emotions is a classic. There is also a consistent rhythm that Vivian follows throughout the poem. There are no extraneous concepts or syllables. It has the economical elegance of a haiku, though it isn't one. [2]