Star Trek Nuts & Bolts is a gen Star Trek: TOS anthology of stories and articles. It is a club zine.

There were thirty-two issues.

The zine came out bi-monthly, with every other issue a double issue. The single issues contain news, club info. The double issues contain fiction and articles. LoCs are in both. The title of the zine comes from a quote by Ray Bradbury: "Fans are the nuts that hold the bolts of the universe together."

Some issues contain material that had been submitted to the proposed zine "Agripol."

A One Shot that Became a Series

From the editorial in the "first issue": "Star Trek Nuts and Bolts, as you all well know, is a one-shot fanzine. Meaning that this is the first and last issue. However... Both of us... may decide to do a shorter issue... If you like it, let us know -- because we want everyone's reaction if we printed STN&B as a short newszine later on."

About Some Regular Features

Star Trek Nuts & Bolts 1 was published in October 1974 and contains 60 pages. It has art by Doug Herring, Janice, Rick Havermann. The front cover is by Doug Herring and the back by Connie Faddis. 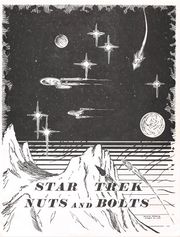 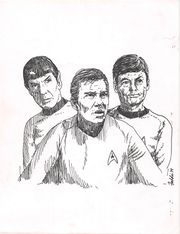 back cover of issue #2, Connie Faddis

Star Trek Nuts & Bolts 6/7 was published in February 1976 and contains about 50 pages. The front cover is by R. Woolworth, the back cover by S. Kopp, and the interior illos by D. Munson and B. Pohl.

Star Trek Nuts & Bolts 10 was published in August 1976. The front cover is by K.L. Higley, and the interior illos are by G. Perkins. 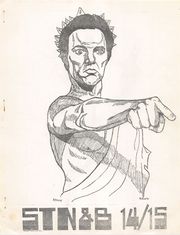 Star Trek Nuts & Bolts 14/15 was published in March/April 1977 and contains 38 pages. It has a front cover by Kathy Lynn Higley, back cover by Douglass Herring, a frontispiece by Steven K. Dixon, and a backispiece by Duane Hanson. This issue focuses on Spock's past. 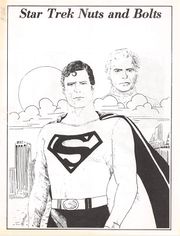 You asked for it, you got it George [referring to the editor's request in Scuttlebutt that someone review his zine], but why in the world you asked for a request of your zine is beyond me. I first considered not writing this at all -- something like if you don't have anything nice to say, why say anything -- but after reading your last issue and editoral comments, I couldn't resist. Frankly, I think you should save your time and efforts. The one or two articles you've somehow managed to come up with that were readable, can't carry the weight of the other tons of dribble you offer. Your zine consists mainly of YOUR comments, YOUR editorials, a selection of boring reviews and ratings, all sprinkled heavily with unexcusable [sic] typos, misspellings, and printed in occasionally unreadable 75% reduction, el-cheapo off-set. My opinion of your zine -- the absolute pits! Save a tree, George, don't waste paper printing the zine, and readers: don't waste your eyesight trying to read it. [2]

If you are a Trekker exclusively, or into SW and ignore all else, or struck in a rut of any other one-and-only fandom, STN&B is not for you. But if you're interested in variety, you'd probably enjoy this zine. (Really, I don't see why the 'Star Trek' is still in the zine title, if #26 is typical, the zine has branched out beyond its original purpose.( Only one piece in the zine is fiction: 'A Most Necessary Duty' by Rich Woolworth. It's a well-written, plausible story of how Leia got the Death Star plans, but it could have been much more fleshed out and detailed than the skeleton treatment it was given here. Admittedly, though, the author and editor wanted a short story, not a novella. The rest of the zine, except for some poetry, devoted to non-fiction; I understand that each issue of STN&B usually has only one major fiction work. 'Tricorder Readings,' a review column is good since it reviews not only fanzines but prozines, novels, and other items a generalist fan would be interested in. Geoffrey Mandel's continuing 'Alternative Factor' is devoted in this issue to reliable-sounding news on the ST movie, including some information I hadn't been aware of from my previous reading of pro media and STW's APOTA. There is also a LoC and ad column. The print is reduced, but clear and readable. The artwork didn't really turn me on, but then it didn't turn me off either. I did get few chuckles out of the cartoons, especially the 'Fan Merchandise We'd Like to See.' Only one thing in the zine bothered me: under the guise of a disclaimer, the editor uses his closing comments to put down a former contributor with whom he apparently had a misunderstanding and a quarrel. I don't know the circumstances and imagine there was right and wrong on both sides. But I consider this personal airing unnecessary and something that should have been kept between the two parties involved. Well, except fo that last bit, by STN&B's own rating system, I'd give it a 7: Quite Good. [3]

Star Trek Nuts & Bolts 27/28 was published in 1979 and contains 27 pages. Is a single novel called "Triumph in the Dust' by Patrick Wilson and Bruce Scivally. 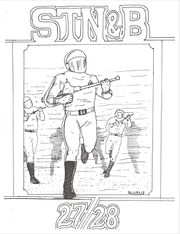 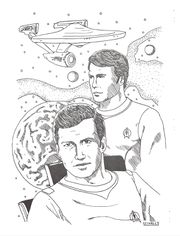 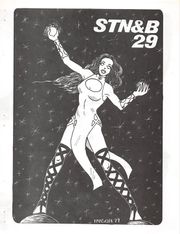 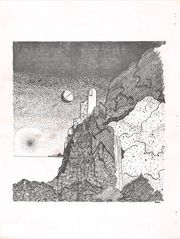