Wonder Woman is a DC Comics comic book series about the superheroine of the same name. 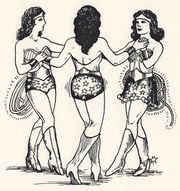 Fan art from 1980: The artist commented in 2017: "The "Three Graces" is an ancient theme used for art work since Greek classical times. It shows three lovely ladies holding hands, each one representing another virtue or good thing such as "Splendor," "Mirth," and "Good Cheer." When I was doing fan art for zines back in my earlier days my clients had me illustrate an article about the evolution of Wonder Woman. When the character was first created she had a bit of "Wild West show" about her with her lasso and a ruffled skirt. Other later costumes from the fifties showed her in circus garb or a shiny bustier. Wonder Woman continues to evolve and is now about to appear in yet another superhero movie though the costume is quite different from the old styles. I illustrated Wonder Woman's changes by showing her as a triple version of herself (but not "Triplicate Girl") and I made her into the classical Three Graces. Original art is black ink on illustration board, 5 1/2" x 6", summer 1980." -- Three Graces of Wonder Woman, Pyrancantha (May 19, 2017)

The character Diana Prince, aka Wonder Woman first appeared in All Star Comics #8 (December 1941), and her first title ran from the summer of 1942 to February 1986. The second title ran from 1987-2006, her third 2006-2010 and her fourth (and latest title) is currently ongoing from 2011 to the present. She has frequently appeared in other titles in DC Comics Universe such as Justice League.

The most successful television version of Wonder Woman is the Wonder Woman (1975–1979) series starring Lynda Carter as the titular character.

There have been many attempts to get an actual live-action film and another live-action series dedicated solely on Wonder Woman; some of those were NBC's WW pilot and CW's Amazon script. Finally, in 2013, Gal Gadot was cast as Wonder Woman for the DCEU.[1] Gadot's Diana appears in Batman v Superman: Dawn of Justice (2016), Wonder Woman (2017), and the Justice League film.

Other common characters are different Amazons (namely Artemis, Antiope, Akila) and the Greek Gods and Goddesses often make an appearance due to their connection to Diana's origin story.

Some of the more well-known WW villains are Cheetah, Ares and Circe.

Guest appearances by other DC Universe characters such as Batman and Superman are pretty common. 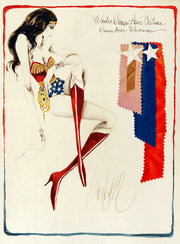 The New Adventures of Wonder Woman

Wonder Woman is a popular character in the DCAU and one of the founding members of the Justice League in this universe. Popular ships that related to WW was Diana/Clark and Diana/Bruce.

The movie was the first critically acclaimed movie in the DCEU verse and kicked off an enthusiastic, albeit not big, fandom. By far the most popular pairing was Diana Prince/Steve Trevor.

Example of an influential comic edit style by mattelektras, 2016 [2]