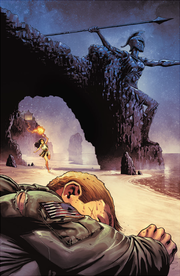 In the New 52, Steve Trevor started heavily featuring in various Justice League-related titles as the League's liaison and his relationship with Wonder Woman was eventually re-established as canon.

In the comics, their first meeting typically happens in the present as opposed to during the First World War that is canon in the DC Cinematic Universe.

Steve Trevor has been Wonder Woman's love interest since the Golden Age but Diana/Steve isn't a particularly well-known pairing in modern fandom due to the fact that they hadn't been presented as each other's love interests since 1985. The pairing started attracting attention again when the New 52 reintroduced Steve Trevor as a potential love interest not only in the main universe but also in several popular alternate universe properties such as DC Bombshells, The Legend of Wonder Woman, the Smallville comics and even the DC Super Hero Girls comics. 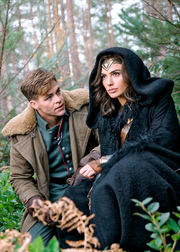 Wonder Woman and Steve Trevor as they appear in the DCEU

The DC Cinematic Universe sparked even more interest in the pairing by featuring Steve Trevor as Wonder Woman's love interest in the Wonder Woman (2017) movie. Fan response to the portrayal of the relationship was overwhelmingly positive. On 13 June 2017, Fandometrics reported that Diana/Steve jumped from being a rarepair to the 10th most discussed pairing on Tumblr that week.

The tragic ending inspired much angst both among fans and in fanworks up until the first leaks confirmed that Steve Trevor would be returning in the next Wonder Woman movie. These developments reinvigorated the fandom and gave way to much speculation. The first trailer to Wonder Woman 1984 was released in December 2019 and lead to increased activity in the fandom.