Hola! is a Wonder Woman zine created by Carol A. Strickland. 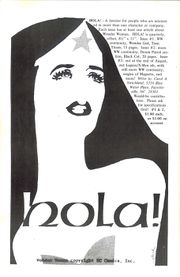 1978 flyer: "HOLA! - A fanzine for people who are interested in more than one character or company. Each issue has at least one article about Wonder Woman. HOLA! is quarterly, offset, 8½″ x 11″." Click to enlarge.

Back in the late 70s I got the idea to produce a fanzine devoted to Wonder Woman... and a few other characters. I had a mimeograph, so what was the problem?

The problem was, first of all, that lousy mimeograph. I got the first issue out and immediately (well, as soon as I had the money) issued a better quick-printed version of the issue to send out to my subscribers.

Problem number two was me. For some reason (I have no idea why) I was completely unorganized back then, and a mess when it came to accounting. It should have been fairly simple, but I messed up subscription accounts and sent out free copies as a way of apology, etc. And worried myself crazy over things.

Plus I could never find the time to work on it.

Hola! had 4 issues, and it's a wonder there were that many! It came out at a time when the TV series was still on the air, and fanzines were flourishing on the fan scene, even as apas (amateur press alliances) were working up steam.

Through my fanzine/apa/letterwriting/college contacts, I lucked into some notable and/or talented contributors. Hope you'll enjoy reading or looking at their contributions.

Looking back on these, I cringe. I mean, I could put out all four of them in just a few hours today in a form that would look crisp and professional and very readable because, you know, I've been a professional graphic designer for decades now and I have this thing called a computer. With these issues, you can see that my typewriter (this was before my Selectric!) didn't even have brackets available. Yikes. [1]

This is a quaint little offset-printed 'zine that brings to mind the true and original fanzine, with loose leaf pages modestly stapled together and the book giving a feeling of fan comaraderie — quite different from the near-slickness of THS and TA but not as bad as a dittoed ragzine.

Hola! endeavors to explore the world of Wonder Woman and other comics/TV characters. Because I don't read comics any more, I got totally lost in the articles, but Wonder Woman fans will find a wealth of information and speculation. Illustrations are taken from a wide variety of fan artists and will therefore be varied in style and quality.

My eyes were a bit offended by the smallness of the print and grayness of the layout in the first issue. This is the same problem that AFTA has . . . graphics is an important part of a fanzine's appeal, and if I can't see it, I won't read it. It has to look good. Experience teaches well, however, and subsequent issues of Hola! featured more illustrations and a smoother layout. The print is still too small, but bigger letters would mean more pages and more money, a factor so prevalent in fanzine production.

Before you think that Hola! is only for Wonder Woman fans, we should mention some other subjects that this 'zine has touched: Teen Titans, X-Men and villains, Spider-Woman, Lois Lane, Doom Patrol and Black Cat. There's much more.

What's the history of the Amazons? Why doesn't anyone recognize Diana Prince as Wonder Woman? Want to know more about Wonder Woman's powers and costume? These questions and more are answered in Hola's first three issues. Hola! is recommended for just about anyone who enjoys being a part of fandom (and keeps better up to date on comic book plots than I do).Nick Chinn, The Heroines Showcase #15, Fall 1978