From Fanlore
(Redirected from Questor)
Jump to navigation Jump to search

The Questor Tapes is a 1974 television film by Gene Roddenberry, a pilot of a proposed series that never made it off the ground. 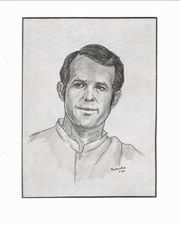 According to Gene Roddenberry's son, Rod, the Questor android was an inspiration for the character of Data [1]

One character in the show, Lady Helena Trimble, was named for Bjo Trimble.

Printed in The Nimoyan #4 (1973) was a description by Bjo Trimble of this show:

Well, viewed Questor with a random group of people asked by the studio (for audience reaction of the general public): a bunch of senior citizens from Newhall, a coupla sailors, and several people who'd been called on the phone. The pilot is GOOD... I was pleasantly surprised, after Genesis II which I didn't like very much. The build-up from the first view of the android, to an almost Frankenstein-creation, to the being he turned out to be was an interesting transition

You've all read the story if you've been into science-fiction more than a year. It is the characterization which carries it. Robert Foxworth is really, a believable android, and Mike Farrell is an even more believable human being! The death scene, when Questor gets shot, is short but traumatic, and well-directed (and edited) The special effects are terrific during the creation of the android, but not quite as great but some nice mat-work) at the ending. The rest of the cast is good, though I object to [there being] only one token female scientist out of a large roomful of great brains of the world (damnit!)

The possibilities are good for more than a mechanical FUGITIVE; the development of the android's manners as well as emotions and morals could be some fun shows. The programming possibilities -- giving him the personality traits of someone else for a short time, etc. could lead to interesting episodes.

I hope that Gene Roddenberry sees to it that the show follows STAR TREK's lead in having comedy as well as adventure episodes. There are some character developments which could be exploited well for episodes when Questor meets certain types of humans, greedy or power-mad ones, well-intentioned but bumbling ones (it is my own certain conviction that the end of our world will be brought about not by a neo-Hitler type, but some kind gentle, WELL-MEANING soul who does it "for our own good" and if that isn't a thought-provoking idea for you..., how about his meeting a very liberated woman, or -- can we do it yet? -- a homosexual? Questor is a handsome android, and certainly would attract attention.)

There was an interesting surprise, too, for me. The female lead was Lana Wynter, whose name is "Lady Helena Alexandria Trimble," and she lives in Trimble Manor, of course. I don't know quite what GR had in mind there. Lady Trimble is, on the surface, at least, the "whore with the heart of gold", but very wealthy; her money is probably obtained from some hefty blackmail deals around the world. But then....is that true? She is most certainly involved with some of the problems surrounding Questor; the question is: how much does she know, and how much is she actually manipulating? Or is she a mere contact? She’s intelligent, has a sense of humor, and definitely mysterious. Fascinating, to coin a phrase. (If I had a choice of alter-ego's, Miss Wynter would be high on the list.

The token female scientist, to nobody's surprise is Majel Barrett. She is dark-haired for this movie (and looks better than as a blonde I think) but is given only a few good lines. Walter Koenig is an administrative assistant, who usually shows up in doorways, looking fatigued and carrying a briefcase, with not much else to do.

After the screening, we were led to a conference room, where we filled out a questionaire [sic] and then were taped while discussing the show. There was a supply of fairly good coffee and donuts to relax everyone. The questionaire just gave the studio an idea of what age bracket we were in, what profession, and our scholastic standing so they could get an idea about the type of people they are dealing with. (I understand that there have been several of these screenings to get a response to Questor, so far.)

After we left, I went to a nearby phone and called GR at Warner Bros to tell him that I'd seen the show and liked it. He seemed gratified about that, and said there was a possibility of getting a 16mm version of it for FILM-CON 2, but would have to see about it. I'd like to do a concordance type of thing, only mainly for writers -— to keep all the facts straight this time --— on QUESTOR. Perhaps our past differences would prevent [Roddenberry] from ever considering it [2]; it would still be an interesting project for some fan.

We were given no date for QUESTOR premiere watch for it. I think most of you will enjoy it. It has been slated for a mid-season show. Support it, if you like it! Again, letters can make a lot of difference between a show making it or not; we fans have a lot of power, if we use it! When it starts as a series is when it will need support; plan to write letters, then, especially.)

When "The Questor Tapes" was finally aired this past spring, it was universally liked, my own opinion was that — dare I say it? — it was as good as, or better than, the best ST episode ever aired. Nevertheless, the show did not make the fall, 1974 line-up.

Why? Apparently, NBC does not learn: they are still timid when it comes to putting on anything new or different, like, for instance, such (gasp) science fiction as Star Trek and Questor, (Remember the air-brushed Vulcan ears?)

Well, they made the same mistake with Questor, except that this was more severe. Having bought it, they said (to quote Star-Borne, which quotes Gene Roddenberry"'Look, let's play it safe. Let's do The Fugitive, except he's a robot, get it?' And I [Roddenberry] said, 'I... I won't do it.' And we argued all of last year, and I finally refused to do it...'" If Questor is ever going to come on, then, it will be done right — Gene's way. And I, for one, agree with him, (If you do to, write to NBC-TV, 30 Rockefeller Plaza, New York, NY 10029, and tell them. Who knows? It might help.)

Why do most fans support simple-minded junk like "alactica" and other so-called TV sf with the comment, "Well, it's not good, but at least it's something sf." It's nothing! Only a few years ago GR offered the networks "Genesis II/Planet Earth" and "Questor", which had the potential of putting some adult level sf on the tube. Harlan Ellison tried to put together a sf series for TV and gave up because of all the hassles from the TV bureaucrats. Any number of fine sf writers could develop intelligent TV shows. Why aren't they on? Because the networks don't have the foggiest idea what sf is. They throw us a few crumbs and we gobble them down like starving mongrels. What we should do is get out our typewriters and pens and tell the networks that we know they are handing us a bunch of garbage and we won't stand for it. And tell them in simple, straightforward terms (but polite!) what we really want. Maybe then we'd get something worth watching. Maybe it wouldn't last long, because if it were too "far out" most TV viewers wouldn't like it, but it would be worth the effort.[3]

Of all his post-ST projects, only "Questor" has come near matching the quality of ST, and even that doesn't hold up well in places. Roddenberry is essentially a well-meaning man whose talent is unfortunately not equal to his ambition. [4]