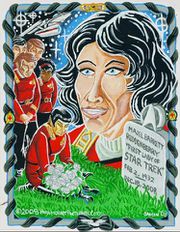 Majel Barrett (aka Majel Barrett Roddenberry) was the only actor to appear in every Star Trek series to date [1]. Several of her characters, as well as the actor herself, are beloved by fans.

She married to Star Trek creator Gene Roddenberry on August 6, 1969 in a traditional Buddhist-Shinto ceremony in Tokyo, Japan. However, Roddenberry's divorce from his first wife Eileen was not yet finalized, so they made it legal with a civil ceremony on December 29, 1969.

In addition to being the ubiquitous computer voice in several of the series, she played Christine Chapel in the original series and Lwaxana Troi in The Next Generation and Deep Space Nine.

She also voiced characters in the animated series and appeared in the the original unaired pilot ("The Cage") as Number One, the Enterprise's first officer. Footage of her appearance in the pilot was incorporated into the Star Trek TOS first season episodes, "The Menagerie", parts 1 and 2.

Majel Barrett died on December 18, 2008.[2] Her final contribution to "Star Trek" was a computer voice cameo in the 2009 motion picture by Bad Robot.

She headed the Lincoln Enterprises mail order firm specializing in Star Trek-related items from 1968 to her death in 2008. 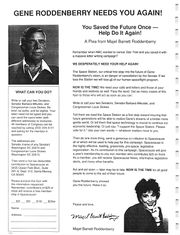 inside page from Engage! #23
In 1993, Barrett took out a full-page ad in several fanzines:

GENE RODDENBERRY NEEDS YOU AGAIN! You Saved the Future Once -- Help Do It Again! A Plea from Majel Barrett Roddenberry: Remember when NBC wanted to cancel Star Trek and you saved it with a massive letter writing campaign? WE DESPERATELY NEED YOUR HELP AGAIN! The Space Station, our critical first step into the future of Gene Roddenberry's vision, is an danger of cancellation by the Senate. If we lose the Station we will lose all of our human spaceflight program. NOW IS THE TIME! We need your calls and letters and those of your friends and relatives as well. Pass the word. Get as many copies of this flyer to those who will act as soon as you can. Write or call your two Senators, Senator Barbara Mikulski, and Congressman Louis Stokes. Tell them we need the Space Station as a first step toward insuring that future generations will be able to realize Gene's dreams of a kinder more gentle world. Or tell them that space technology is crucial to continue our economic leadership. Or just say, "I support the Space Station. Please vote for it." Use your own words — whatever matters most to you... [snipped] Gene Roddenberry showed you the future. Make it so.

Barrett attended hundreds of Star Trek and media conventions large and small for 30 years, from the 1970s to the mid-2000s. Just a few of these included Equicon/1973, Equicon/1974, and Equicon/1976; as well as Phoenix Fan Convention, DixieTrek, Satellite One, and PortlandTrek. She would often bring merchandise from her mail order business Lincoln Enterprises to offer for sale at these cons.