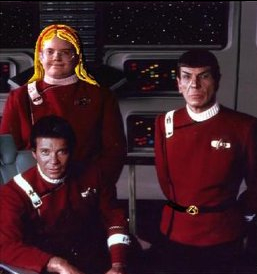 Some Fic, Filk, and Art Links

On her website Gamin describes her travels through Trek fandom:

Greetings and felicitations, everyone, and welcome to my website! For those of you who don't know me, my name is Gamin Davis and I have been a Star Trek:TOS fan since first starting to watch the show in reruns back in the early 70s. I've watched all incarnations of the show on TV and the movies up through Generations, but none of them--including Voyager, which I also enjoy sometimes--have captured my imagination like the original Star Trek series and the animated series that briefly followed it.

Recalling that I had seen it at 9 years old when it was still in production and my parents watched it and not (at that time) been interested or really known what it was, I began watching it seriously in the afternoons when I was in Junior High School. I was hooked with "Amok Time", still my favorite episode, instantly identified with the character of Spock--the outcast hybrid who found friendship and acceptance outside his homeworld--and never looked back.

In the late 70s, I discovered organized fandom, and through a Leonard Nimoy fan club, I learned about things called fanzines. By the end of 1981, after I'd graduated from college and gotten my B.A. in English, I'd had my first story published in a New Zealand club zine called Nome. I've been writing TOS fan-fiction ever since, focusing mainly on Spock and Kirk's friendship and Spock's relationship with Christine Chapel (heavy emphasis on hurt/comfort), and I began posting some of the early stories to the Internet upon joining ASC (alt.startrek.creative) in '99.

Over the last few years, I have started my own mostly-Star Trek-fan-fiction-related discussion groups on Yahoo--as of this writing, four of them. KirkSpockFriendsForever is focused on Kirk and Spock (and William Shatner and Leonard Nimoy) and their friendship--no slash or other content about PG13 allowed. SpockChristineRomance is devoted to the concept of a relationship between Spock and Christine, anything from early friendship to romance and marriage--again, no content over PG13 (there are already adult S/Ch groups out there). Then there's my newest group, called Vulcans1stFamily, which is for Spock and his family (Sarek and Amanda, specifically). I also have a zine-oriented group, TrekZinesCentral, for those interested in Star Trek fanzines. whether you're involved with them now or just wanting to learn about them. [1]

Gamin Davis wrote the essay, Kirk and Spock: The Straight Story. An excerpt:

Back in the days when I originally wrote the original version of this article, sometime in the late 70s, I was new to organized Star Trek fandom and just getting into fanzines. It had, quite frankly, never even crossed my mind that Kirk and Spock's relationship could be seen as homosexual until I became aware, through my membership in the now-long-defunct Leonard Nimoy Association of Fans, that other people were not only writing Star Trek stories that were collected into things called "zines", but some of these zines were devoted to the characters' sex lives--including, of all things, Kirk and Spock having sex with each other. Granted, I was at an impressionable age at the time, but it's over twenty years later, now, and I still don't get it. Wanting to be able to form an educated opinion on the subject, I ordered an adult zine as soon as I turned eighteen, just to see what some of this adult fan-fiction was like. I still remember the name of the zine, the K/S story and the author, but no other details about the story, other than I wasn't able to take it seriously and found it very offensive. I never read another K/S story until joining the online newsgroup alt.startrek.creative, where I could do so without having to pay for the privilege, as well as acquaint myself with the views of a variety of K/S fans, and to this day, I still can't read a K/S story all the way through without either skipping parts or just not finishing them. As I said, I still don't get it; it's as if slash fans watched some alternate-universe version of Star Trek that I never saw. Maybe in part, it's because I identify so strongly with Spock that I find the idea of him being in a homosexual relationship with Kirk so implausible, or maybe it's just that that exploring the characters' sex lives is just further than I ever wanted to go in any fan-fiction I read (or wrote), but either way, I've never seen anything in canon to make me believe it could be possible for Kirk and Spock to be sexually involved with each other. ...a couple of things: (1) Roddenberry was playing with fire when he attached the "lovers" meaning to t'hy'la, even though his overall purpose was probably to settle the matter. (2) Spock's reaction--"dismissing" it with "surprise, disbelief, and/or annoyance"--combined with Kirk's (he prefers women) make it pretty clear to me that the only sexual involvement between them is in the minds of the rumor-mongers. As for K/S (slash) fandom vs. K&S (friendship) fandom, I don't think diehard members of either camp are going to be converted by anything anyone says or writes, so my purpose here is just to state my position that there simply isn't any indisputable canonical evidence that Kirk and Spock were ever lovers. What there is is abundant evidence of their intense feelings of friendship for each other; in my view, slash fans choose to attach sexual undertones to every word, look or action between them, however innocuous. To me, this is just sort of an alternate universe of their own making and has little relation to Gene Roddenberry's Kirk and Spock…which, for them, is fine. But as for me, I'll stick with the Kirk and Spock I know--the real, original, straight Kirk and Spock.[2]

Where do you guys draw the line? I've been reading with interest how a few people on this list, and most significantly Gamin Davies comments on the subject.

I'm interested, because what I've read of Gamin's stuff signifies as slash to me. There's a relationship between Kirk and Spock where the love shines through, and not platonic or friendship love either. There's a whole lot of touching going on and the dialogue to me suggests rather an unspoken love - as in a romantic love - than a friendship.

What I'm referring mostly to is "The Loneliness of Command" that I've been reading on ASC. I'm not going to quote any of it here since I do not have Gamin's permission to do so, but the story to me is full of very subtle slash, but still slash."[3]

[compiled from several]:You can take it that way if you wish, but believe me, I have never written K/S slash. It just happens to be friendship stories that involve some physical contact--but it is NOT sexual. If I set out to write K/S--if I could ever get through the writing of such a story--believe me, there would be no debate as to whether or not that was what it was. Physical contact doesn't automatically equal slash. I, at least, can differentiate between a deep friendship involving a mental bond where the parties are not afraid to touch and a sexual relationship. No, sorry, it's not [slash]. If it were, I would have them kissing, etc. Now, I can't stop you from interpreting it that way if that's what you want to see--and I think that's the problem, you're probably seeing what you want to see. But you're just going to have to trust me that it's not. You are putting your own spin on it. There is no slash in any of my stories. Touching, lots of h/c, angst, yes--but not slash. Their relationship in my stories has nothing to do with sex or physical desire. They're friends--period.... I will resist the temptation to repeat verbatim what I just posted in response to this from my newsreader. I'll just summarize by saying that *this* is where I personally "draw the line"--to me, slash [equals] sexual relationship. The fact of the matter is that in NONE (count 'em, none) of my stories do Spock and Kirk have a *sexual relationship*, therefore my stories are not slash--including "The Loneliness of Command". If you wish to read that into it, have fun; it's not there, but farbeit from me to interfere with other people's fantasies... ...it is (by design)--non-slash hurt/comfort stuff. And of course, to me, this *is* "the real thing" and slash isn't. But, as you say...IDIC, people.[4]

Some of Her Art Work

Some of Davis' Fanworks in Zines