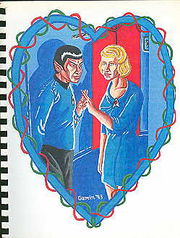 cover of issue #1 by Gamin Davis

"Author's Note: These stories are set in a parallel universe very similar to the real Trek universe where Spock is more open with his feelings - at least in privacy. Publicly he is all Vulcan."

Heart Treks 1 was published in 1993 and contains 171 pages. Cover by Gamin Davis; written and illustrated by JM Lane. Stories delving into the feelings of love and friendship between Kirk, Spock, McCoy, Christine Chapel & Uhura. Artwork by JM Lane and DM Anderson. 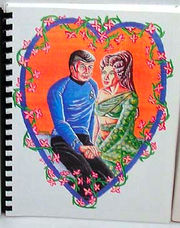 Heart Treks 2 was published in 1994 and contains 250 pages. (1994) Another collection of stories centering on the love and friendship between Kirk, Spock, McCoy, Chapel and Uhura. 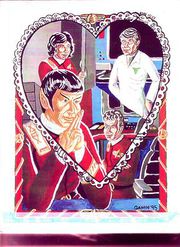 From an ad: "The fourth and most risque (adult-themed) collection of stories by J.M. Lane featuring the relationships and feelings between the Big Three, Spock and Christine, and Christine and Uhura." 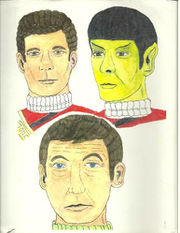 Heart Treks 5 was published in May 1996. It has a color cover and interior color art. 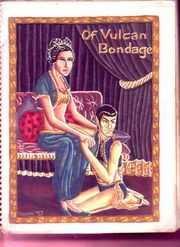 Heart Treks 6 was published in 1997 and contains 275 pages. Color cover by Gamin Davis; interior art by Gamin Davis and J.M.Lane. 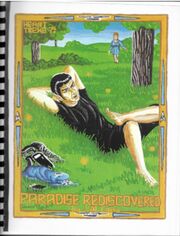 Heart Treks 7 was published in 2000 and contains 175 pages. All of the stories are by J.M. Lane. The color cover and interior art is by Gamin Davis.

The combination of the sometimes unpopular of subject matter (Spock/Christine) and Gamin's unusual art style led to criticism of the series. The review zine Psst... Hey Kid, Wanna Buy a Fanzine? was well known for its frank and often blunt reviews, however in 1997, the Heart Trek series received a particularly harsh and mocking review. Since it is the only review offered, it presents a limited picture of the series and how it was received in fandom at the time. Additional perspectives are welcomed and encouraged.

Excerpts from the review: