Uhura's first name was never given in the original series. Lacking an official first name for Uhura, some early Star Trek fans decided to give her a fanon personal name and called her "Penda."[1]

TOS's writer bible suggested that Uhura's birthplace was the United States of Africa, although this was never outright stated in canon.[2] Uhura is known to speak Swahili. Fanon holds that Uhura is from Kenya, an idea supported by the tie-in novels.[3] 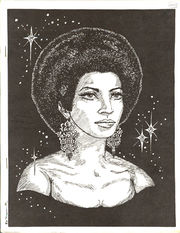 After the first season, Nichelle Nichols was tempted to leave the series. In a recent interview,[4] she recounts that her increased popularity due to the show led her to think about working toward a Broadway career (Ms. Nichols is a singer and a dancer/choreographer.) In the past, she has also spoken of her frustration at the limitations imposed on her role on the series. She faced oppressive resistance from a network concerned about the reactions of its affiliates to her presence onscreen; her lines in scripts were often cut. A conversation with Martin Luther King, Jr. changed her mind. He told her that she was an important role model for young black children and women across the country. Indeed, Uhura was a positive influence. Actress Whoopi Goldberg, and astronaut Mae Jamison both claim Uhura as an early role model. [5] In her book of essays, Racism 101, Nikki Giovanni writes "I've been a Trekkie since the television series Star Trek began. I was intrigued that a sister, Nichelle Nichols, was the communications officer."[6]

After the series ended, Nichols volunteered her time in a successful NASA campaign aimed at recruiting African Americans and women.[7]

The TOS episode "Plato's Stepchildren" is often cited as one of the first interracial kisses on U.S. television. In the episode, a mind controlled Captain Kirk and Lieutenant Uhura kiss. Both Shatner and Nichols claim that there was no actual physical contact between them during the scene in question, due to pressure from NBC. [8]

While the studio was concerned about reaction to the episode, viewer reaction was largely positive. Nichols said:

"The mail poured in. We had more mail on that episode than any other episode in all of the time of Star Trek. But Gene [Roddenberry] said to me over a letter from the fanmail, 'This one letter in here, this is the extent of the negative mail that we've received.' And it was from a man in the South who said 'I don't believe in the integration of races and the fraternization of the races, but anytime a red-blooded American boy like Captain Kirk gets a girl in his arms that looks like Lieutenant Uhura, he ain't gonna fight it.' So so much for the worries and the concerns about whether people can handle it, so I think we knew we were on the right track." [9]

Some fans have turned a more critical eye on the kiss: "But... am I the only one who is really bothered by this being used as a great example of something wonderful, since the Kirk/Uhura kiss is clearly non-consensual by both parties and is actually a form of sexual harassment/assault"? [10] Rather than breaking down taboos, some feel that the kiss was subtly reinforcing the idea that white men had a right to black women's bodies. "That the kiss was forced instead of wanted leaves an awful taste reminiscent of a slave master raping his female slave." [11]

A friend consulted with a Tanzanian professor who is a Swahili expert: the Swahili noun for Love is Upendo, but when it was made into a name the U is dropped. Since, the expert said Uhura is not really correct Swahili (well, language changes over a couple centuries), the first name would probably be English feminized like the last name -- Penda Uhura. (Information provided by Dr. Richard Kurtz, Notre Dame University.

Natonne Elaine K was starting a fan club called Fans of Penda Uhura and Hikaru Sulu and wants some clarification on those characters' two first names -- she points out that Mary Louise Dodge in her capacity as a spokesperson for the STW has given her some information:

As mentioned previously, Ms. Dodge was extremely helpful. For example, Ms. Dodge stated that during the mid-1970's, Dorothy Fontana announced at a convention that the first name of Sulu was "Itaka" and the first name of Uhura was the Swahili name for love ("Upenda" or "Penda"). In addition, Ms. Dodge stated, that to the best of her knowledge, "Hikaru" was first used in Vonda N. McIntyre's novel. The Entropy Effect. From our research and inquiry, "Itaka" has never been well received by the fans. In contrast, "Hikaru" seems to be well accepted by the fans. This is why this organization favors this name. In reference to "Penda," besides the information provided by Ms. Dodge, members of this organization have heard about fans selecting "Penda" as Uhura's first name in the mid-1970's. What occurred first: Dorothy Fontana announcing "Penda" as Uhura's first name or the fans selecting this name? Or, was the selection of "Penda" by Star Trek fans an act of approval of the name chosen?... In recent novels published by Pocket Books/Timescape, the name "Nyota" (which means "star" thereby, Nyota Uhura meaning "Star Freedom" [see Uhura's Song]) has surfaced as Uhura's first name. As far as this organization can determine, "Nyota" first appeared in William Rostler's Star Trek II Biographies. Rostler's book contains many errors, such as the existence of a sister for Kirk, "Michele" and the fact that Kirk was not born on Earth. Since there are gross errors surrounding the biography of a major character such as Kirk, the credibility for the other biographies is weakened. Thus, FOPUAHS would like to know, is Rostler's version considered official? Rostler states that "Hikaru" is Sulu's first name. We realize that Rostler's book was published after McIntyre's novel. Hence, Rostler probably derived Sulu's first name from The Entropy Effect. Likewise, Uhura seemed to lack a first name in the novels until after Rostler's book was published. Thereafter, writers of Star Trek novels began to incorporate "Nyota" into their novels. [12]

Uhura's first name was a bit of a battle between canon/tie-in novels and fanon/zines:

I just don't know about this movement to make "Penda" Uhura's first name. I'm usually not one to pick at details but a name is pretty important. It seems like every Star Trek book I've ever read (and that number is close to 100) that mentions Uhura's first name says it's Nyota. I remember reading an article somewhere, sometime in the distant past (maybe a Best of Trek?) that said her name was Penda. But, I'm much more inclined to take the general consensus of a lot of books rather than someone who simply says what her name is. If Penda was "officially" recognized, all those books would be rendered untrue. [13]

In a 1990 zine foreword for Starbound #2, Nichelle Nichols herself affirms that Uhura's nickname is Penda/Upenda. (She spells it "Upenda" in the foreword; the name spelled as "Penda" many times in the story):

Consider the deep-welled friendship between Uhura and Christine in "Hot Time In The Old Town". The author, in this case, wisely chose a light-hearted approach to their strongly felt relationship. These are two women totally at ease with one another (note Christine's use of Nyota's nickname, Upenda, obviously stemming from years of shared adventure on and off the starship Enterprise). They really know one another, and so their emotions are very real and natural and their friendship survives through it all, even their different tastes in music. Their mutual trust and quirky senses of humor are ties that bind them so nicely. (They truly remind me of Majel and me...okay, who's been eavesdropping?!?!)

Putting [a history of K/S fandom] together would be a pain in the royal ass, though, and would have to include some of the history of general Trek fandom as well. A good point is Uhura's first name. I don't know when the COMPENDIUM came out, but "Nyota" is not how I think of Uhura. Penda was used in a story in the 70's (does anyone know which one?) and fandom took it up. It was one of those things which seemed right and was used by so many that it became part of the fannish lexicon even though it wasn't in the aired Trek. When an author uses Penda. it says she has either read a lot of the old zines or she is an old-time fan.. [14] 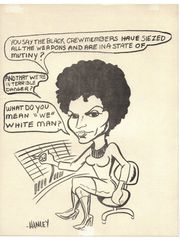 Caption: You say the black crewmembers have siezed all the weapons and are in a state of mutiny? And that we're in terrible danger? What do you mean "we" white man?" (cartoon showing Uhura from the early 1970's, by Alan Haney)