This series of UK zines was put out in the early 80s, and I think only ran to the three issues. They are small zines, averaging 36 pages (UK zines have always been much smaller than US ones). The humour is, I suspect, very British, but is of the kind that I personally thoroughly enjoy - where the humour depends not on silliness but on the characters behaving exactly in character. One story I very much enjoy is one in which Kirk has all the symptoms of pregnancy - because subconsciously Spock believes that his bondmate must be pregnant. In another, Kirk finds an inflated female dummy in his bed... The gem of the series, however, has to be Mary Hughes' "Amanda's Dilemma" in the first issue. Kirk and Spock have returned to Vulcan to tell Sarek and Amanda that they are bonded, but the news is not received just as they would like: "We... wanted you to find the right person and be happy," Amanda told Spock. "I have found the right person," Spock replied. "Jim," said Amanda with feeling, "is NOT who your father and I would have had in mind for you." Spock, going to town for furniture, uses all their money to buy a computer; Amanda gives them some old furniture, but the bed creaks. (Felicity M Parkinson picked up on this and had a sequel in issue 2 that revolves around their trying to stop the creaking.) The story introduces Spock's eccentric Aunt T'Pitha, who gives them a present of a pre-Reform design bonding quilt, which guarantees conception... Eventually, Spock's cousin, intercepting a mental message from Kirk to Spock, tries his luck with Kirk and ends up in the fishpond. "(Your aunt)," said Sarek, "is most disturbed and what is worse, the fish have been seriously alarmed and three of the water lilies will have to be replanted..." These characters are not Vulcans as we know them, and the whole setup, while perfectly logical, is ludicrous. [1] 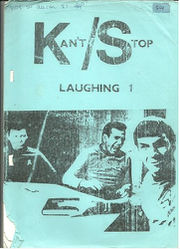 Kan't Stop Laughing 1 was published in 1980 and contains 42 pages. Illos are by Miss Noma.

Kan't Stop Laughing 2 was published in 1981 and contains 33 pages. The illos are by Miss Noma. 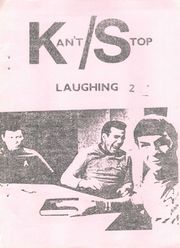 Kan't Stop Laughing 3 was published in 1981 and contains 32 pages. Illos by Miss Noma. 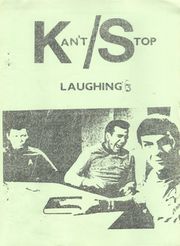