Amani was the newsletter of the Nichelle Nichols Fan Club which was published monthly.

Amani is Swahili for "peace."

The fiction and art fanzine for this club was called Furaha.

Amani 1 was published in January 1975 and contains 2 pages.

Amani 2 was published in February 1975 and contains 2 pages.

Amani 3 was published in March 1975 and contains 2 pages of news, a full-page "Red Alert" page from Gene Roddenberry about the success of a fan campaign for the first movie, a two-page letter from Roddenberry about movie news/rumors and how to write the network, and a "Yellow Alert" for fans to write in a protest the cancellation of the Star Trek animated series.

Amani 4 was published in April 1975 and contains 2 pages. It talks of OurCon, of Furaha #1 being at the printers, and of many fans writing in that they had a new interest in learning Swahili.

Amani 5 was published in May 1975 and contains 2 pages. It talks of OurCon, of the ST gathering at Michigan State University for Star Trek Lives! where the show's stars were present. "Speechifying was done by all, and then an uncut 'City of the Adventure' was shown. The Blooper Film rounded out the late evening." The editor says the book Star Trek Lives! is due out soon.

Amani 6 was published in June 1975 and contains 2 pages. The editor says both issues of Furaha are back from the printers and that she is putting together a Welcome Package for fan club members. The package will include "a membership card, a signed 8x10 photo of our Lovely Leader, a color poster (the same shot as is on her 'Dark Side of the Moon' album), an 'Uhura for Captain!' button (which we have asked you to wear upside down, remember!), a reciept if you haven't already received one, a Welcome Booklet with a letter from Nichelle, an outline of what the club is and does, an article from Nichelle about 'Kwanza', our official club charity, a 'specially prepared bio of our Lady Nichelle, and a brief profile -- accompanied by a photostamp -- of your First, Second, and Third Officers."

The editor reminds fans that Furaha will go out to fan club members first, and if there are any leftover, they will be sold to other fans.

This issue contains a long letter by Gene Roddenberry about the movie's progress, as well as a full-page announcement of Chicago Con in August.

Amani 7 was published in July 1975 and contains

This double-issue of Amani begins with a few items of club interest. There are two very good cartoons within, and some interesting news of general interest to ST fans and club members. A good length report of the Chicago and Philadelphia cons makes for some very good reading; there's also an interesting article about the club parties at the various cons. A short review of Barbary Coast and Space: 1999 finishes off this issue. Although this club has been in existence for under a year, many fans rate it very highly.[1]

The editor notes that the club now has 300 members, triple the number of a year ago.

The editor is distraught that postage rates have doubled, and the fan club is in dire straits.

Did you know that back in the sixties Nichelle Nichols made an album? This album DOWN TO EARTH is now completely out of print, but we have one copy! If you would like the have the next best thing, just send a 60-minute cassette (30 minutes each side) and $2.00 plus 50 cents postage and you'll get

1. The complete album taped on a professional tape recorder setup

2. A printed sheet with the complete liner notes reproduced from the record jacket

3. a 3x3 color snap of the cover photo -- would you believe a color shot of our Nichelle in a white gown, stretched out on a polar bear rub?!

We have this album through the generosity of Joanie Winston. Thank you, Joanie! 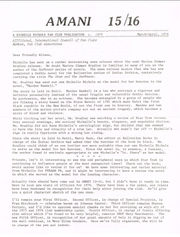 From the editor, a note on Marion Zimmer Bradley and her fan casting of Nichelle Nichols in her next book:

Nichelle has sent us a rather interesting news release about the next Marion Zimmer Bradley release. No doubt Marion Zimmer Bradley is familiar to many of you as the author of the Darkover series of novels. The news release states that she has now completed a Gothic novel for the Ballentine series of Zodiac Gothics, tentatively carrying the title The Drum and the Darkness.[2]

Ms. Bradley has used our own Nichelle Nichols as the model for her heroine in the novel, "Mardee Haskell." The story is laid in Haiti. Mardee Haskell is a Leo who portrays a vigorous and definite personality instead of the usual fragile and vulnerable Gothic heroine. By profession, she is an actress. She becomes entangled in a group of people who are filming a story based on the Slave Revolt of 1781 which made Haiti the first Black republic in the New World, if not the first one in history. Mardee and two members of the motion picture company act out an ancient tragedy, which becomes a story of blood and violence.

While blocking out her novel, Ms. Bradley was watching a series of Star Trek reruns. Over several evenings, she noticed Nichelle's beauty, elegance, and exquisite diction. Ms. Bradley did not know Nichelle's astrological sign, but decided that she seemed to have the fire and vivacity of a true Leo. Actually she wasn't far off -- Nichelle's sign is really Capricorn with a strong Leo rising.

Since the story is laid in Haiti, Marcy Rudo, the editor at Ballentine Books in charge of the Zodiac Gothics had asked that the heroine of the book be black. Ms. Bradley could think of no one lovelier nor more suitable than our own Nichelle Nichols to serve as the model for her heroine. Since the novel is, in essence, a fantasy, the author found it entirely appropriate to use Nichelle's "Lt. Uhura" as her model.

Friends, isn't it interesting to see the odd peripheral ways in which Star Trek is continuing to influence people at the most unexpected times?

The content is entirely about the Space Program and Nichols' support of it.

Our Nichelle was thrilled to bea special V.I.P. guest at the Viking Mars landing festivities at the Jet Propulsion Lab in Pasadena, California. She went with her son, Kyle Johnson, and spent a little over twelve hours straight there participating in the excitement. Actually, she was present as a member of the working press, and she is in the process of working out a lengthy article for anticipated publication in EBONY magazine. She is also delighted to have been invited to attend the roll- out festivities of the "real" U.S.S. Enterprise, and invited to join the National Space Institute.

From all this, and her rap sessions at the recent conventions, you can see that our Nichelle is very enthusiastic about the U. S. space program of exploration.

Amani 22 was published in October 1976 and contains 2 pages (and eight flyers for cons and T-shirts).

The editor encourages fans to go to a con, The Playboy Science Fiction Convention, where Nichols will be performing:

On the phone last week, Nichelle told me all about the convention at the Playboy Resort and Country Club at great Gorge, New Jersey. She is the Star Trek guest. And she told me something really exciting! She will be performing there, at the club! The flyer for the con is run on the flip side of this newssheet. Note the reasonable attendance fee -- not like a lot of recent conventions. Also, for those of you in the New York area, note the fact that there will be shuttle busses daily from the Port Authority terminal.

Our Nichelle suggests that in lieu of a club party -- as she won't be able to stay for the full convention -- we should have a club members meeting and just rap. She's suggested Sunday afternoon, some time. Check the club table for info on this regarding exactly where and when. Remember -- this is your chance to see our lovely Nichelle's club act!! Don't miss this chance! I'm planning to arrive on Thursday, set up the table, and then have a rap with Nichelle if she and I can get our schedules together. Check at the desk for my room number, and I'll have a NNFC Headquarters notice on my door (Thank you, Gee Moaven!) so you can find me. Leave a message for me if I'm not there. Remember to check in on the club listing as soon as possible so you won't miss anything.

The editor reports that Bunny-Con was not well-attended:

I didn't find out in time to get the word out to you about the Playboy Con, anyway. I'm really sorry about that, as it could have been a really good Con if it had been better attended. There was practically no publicity ahead of time (which was why I didn't know about it) which meant that it was very sparsely attended. What made it very special was that Nichelle was appearing in the club lounge both Friday and Saturday evenings. Her act was just fantastic!

The editor reports that the fan club is struggling:

No, your First Officer hasn't died and/or moved to Acapulco! There have been an unfortunate combination of problems which have kept me from keeping NNFC 1976 at the same level as NNFC 1975. However, Nichelle and I are working together and with her love and support, and the understanding of all of you, we'll pullout of our tailspin.... For 1977 we'll be changing the focus of the club and organizational setup just a little. First of all, we're separating FURAHA from the membership. I t will still be available to club members, and at half-price. In its place as a club membership publication will be a new one. Our new yearbook, devoted entirely to Nichelle, will be entitled UZURI, which is Swahili for "Beauty." We think it's fitting! We now have AMANI, "Peace"; FURAHA, "Joy"; and UZURI, "Beauty. And of course -- UHURA!!

In accordance with our continuing policy of special emphasis on the Women of Star Trek, FURAHA will take that role. FURAHA is the maxi-fantasia on the thirty of the ST guest stars. FURAHA #6 will be Uhura-oriented, FURAHA #7 will be a salute to Majel Barrett, and FURAHA #8 will be devoted to Grace Lee Whitney. We hope you like it.

There is a letter by Nichelle Nichols:

Dear Friends, Two whole years have passed and our club has grown by leaps and bounds, mostly due to the hard work and dedication of First Officer Virginia Walker. Unfortunately part of this year, due to hospitalization, Virginia was not able to keep the mailings on schedule. And as fate would have it, she was forced to switch to a more expensive printer -- further complicating matters.

We hope you'll accept this special package we've put together for you.

Now that things are smoothing out, we're looking forward to an exciting new year -- I will be devoting a lot more personal time to the activities of the club with articles and poetry, and there will be some lovely new pictures unavailable anywhere else.

Our club has been chosen for a special feature in All About STAR TREK FAN CLUBS, and in 1977 we shall see the beginning of some NNFC chapters around the world.

If you would like to write me personally, write me at:

Yours in Peace and Love, Nichelle Nichols

P.S. Please don't worry; you will receive all issues of FURAHA to which you are entitled just as soon as possible. Thank you for your patience while we get it all together again.