a very early ad for this zine, from Ruth Berman's catalog

T-Negative is a gen Star Trek: TOS anthology. It ran for 35 issues starting with #1 in June 1969, ending with the double issue #34/35 in March 1979. Earlier issues saw reprints in the mid-1970s in a smaller digest sized format (thus page counts between editions may vary). The name of the zine comes from Spock and Sarek's rare blood type, "T-Negative."

A sort-of sister zine is T-Positive.

A tribute issue is A Tribute to T-Negative.

The zine series began after the cancelation of the original series, and the subsequent first cease of Berman's Inside Star Trek zine series.

The entire series has been archived online. See T-Negative at the Fanac Fan History Project.

In her editorial, Ruth gave her reasons for starting the fanzine:

In November 1968 I started watching Star Trek, mainly because Juanita Coulson had recommended it so highly in Yandro. By December, I'd gotten Eleanor Arnason hooked on it, too, and by December she made the classic remark, 'We could write that, too.' In the months that followed, I worked on several scripts, some in collaboration with Eleanor, and some on my own.... Some of them, and some of the stories, could perhaps be re-written as novels and sold as such (if Bantam publishes an original novel by James Blish...and if it is successful enough to make them want to publish more, and if they will consider other authors if they want to publish more). As the prospect is so exceedingly iffy, I don't want to wait.

It is one of the very earliest Star Trek fiction zines published. For others, see List of Star Trek TOS Zines Published While the Show Was Still On the Air. Like some fanzines of that era, earlier issues were published without the required pre-1989 copyright notices, possibly placing the fanzine in the public domain.

Favorite artists that I got to publish in T-Negative – Alicia Austin, Tim (that’s a woman’s name) Courtney, Anthony Tollin, Greg Barr* [1] (only the once, but a beautiful portrait of Uhura)

You also asked about color in T-N. When I started it, I was producing it on a Ditto machine. With the Ditto process, it is fairly easy to use different colored masters to produce color work – but not so easy that I felt able to do it myself. (The b&w covers were done professionally, by photo-offset.) The reason color started showing up in T-N was that Anthony Tollin started subscribing, and enjoyed the Dorothy/Myfanwy stories, wanted to illustrate them, and had the artistic and technical skills to do it in color. The drawback to Ditto is that you get only some 50-100 copies before the master is worn out. When my subscription list got too large to handle on Ditto, I switched to Mimeo, which allows many more copies, but cannot match Ditto for placement of color detail and makes even the rough kind of color that can be done much more difficult. So once I switched to Mimeo, it was all b&w (and when I reprinted the early issues in Mimeo, the result was all b&w). Later, when I switched to paying a printer to print the issues by offset, color would have been possible, but prohibitively expensive. Nowadays, with color printing available on home computers, the cost for color work has come down considerably, but it’s still expensive enough in equipment and supplies to be too difficult for many. I don’t know of color artwork in ST-zines before T-N, but there may have been some. (I know of some early general sciencefiction fanzines that made use of color – even Mimeo’d examples! [2]

The Dorothy and Myfanwy Stories

"T-Negative" was the home of the Dorothy and Myfanwy Series, stories which focused on two young women aboard the Enterprise.

Popularity of the Dorothy-Myfanwy stories – well, Anthony Tollin was impressed by them, and so were most of the readers who commented about them in letters [to T-Negative]. So I’d assume that they were also popular with the readers who didn’t comment on them specifically. That one story’s characterization of Harlan Ellison as unpleasantly sharp-tempered – well, he is, some of the time. A lot of the time he isn’t, and on his good behavior he’s a lot of fun to be around, not to mention being a fine writer. I think most people would agree, in or out of ST fandom. Looking at a couple of websites, I see that some readers nowadays complain that the Dorothy/Myfanwy stories are basically just "Mary Sue" stories. (I don't think I was getting that complaint at the time -- well, the name hadn't been invented yet, so I couldn't have, but the basic complaint could have been made without the term, and I don't think it was.) Technically the group does have the characteristics of "Mary Sue" (the name is from the protagonist of "A Trekkie's Tale," a parody of the type by Paula Smith, from her ST fanzine, "Menagerie," in 1973) stories (the protagonist is a young, beautiful, genius-level woman who resembles the author, and wins the heart of one or another of the main characters, usually Spock, and usually very gooey in tone, representing as they do authorial wish-fulfillment). But I think this group was better than the label would suggest, for its narrative humor and use of interesting world-settings. [3]

The zine series was one of the original homes of the Kraith series. According to a 2020 interview with Jean Lorrah and Jacqueline Lichtenberg, Spock's Affirmation, which was published in T-Negative, was "one of the earliest stories written for a fanzine based on characters from the show... and the first of the Kraith stories—a fan-created Star Trek storyline with multiple writers contributing through zines."[4]

Jacqueline Lichtenberg’s Kraith stories – I published the first several of these in T-N and found them impressive. As Jacqueline went on, they were getting longer and required more background knowledge of all of them to be understood, and I didn’t think I could cope with continuing to publish them and still have room in T-N for other people’s stories, so I asked her to find another set-up for them, where they could be stand-alone publications and the impact of the series as a series would be clearer. I think it was at that point that Kraith fandom developed as a fandom, and I didn’t have much involvement in it after I’d stopped publishing the stories. [5]

Great zine! Ruth used to get on the ST set and usually has short pieces about various happenings during the late 2nd and 3rd season filming. I wish she wouldn't use ditto for running the zine as it tends to be hard to read in spots. The selection of stories is sometimes good, but usually at least fair. She appears to have an awful lot to draw on in the way of talent. The only one I never liked were the Dorothy and Myfanwy stories written by Dorothy Jones and Astrid Anderson. The character of Myfanwy was fair, but the character Dorothy was done too much as a juvenile to be believable. I think she must have been done by Astrid who is young enough to understandably lack the maturity to carry through with a full, 3-dimensional character. The most outstanding story presented so far in the zine is 'For the Good of the Service'. It would have made an excellent 2-part episode for the show and very reasonable to produce. [6]

This is ST's longest continuous zine and is consistently high quality, and is a real bargain at the price. Around 20 pages, offset. #1 - 12, 19-28 available @75c each or 3/$2.00. The earliest issues contain the Dorothy/Myfanwy series, one of the few times "trekfan aboard the Enterprise" type stories really work well. #13 which may be available by now has one of the best ST stories ever, "Sentience is where you find it." If you enjoy ST fiction, the back issues are worth investing in. [7]

For the price, you can't beat it for value, though Ruth does not (or has not) improved the lay-out of the zine much at all. The size of the print varies, as do the margins, sometimes the type is blurred or "messy," and the art ranges from superb to mediocre. Another "historical" zine, to rank with Spockanalia. [8]

From "A Tribute to T-Negative"

In September 1980, Stephen Borer published "A Tribute to T-Negative," a 20-page collection of fan's personal recollections, poems, parodies of letters to the editor, story satires, and a serious account of a visit to the Star Trek movie set.

By Joan Verba, from that issue:

T-Negative is a remarkable fanzine... Published at a time before large ST cons, before books about ST fandom, before STW, and before such fanzines as Halkan Council (and later Interstat and Scuttlebutt), it was a major source of information about topics related to ST and ST fandom... One of the outstanding features of T-Negative was its diversity. In fiction, there was something for everyone: tie-ins to episodes (such as "For the Good of the Service"...), Mary Sue stories (such as the Dorothy-Myfanwy series... also one of the first to be explicitly labeled an alternate universe Trek story), Get- stories (such as "Marginal Existence")...

In addition to the fiction, T-Negative has a wide variety of articles and information. Ruth Berman's 'Set-To' series featured articles about the backstage elements of ST, were first, followed by detailed character profiles of the crew by various authors, and supplemented by the 'Old Time Reviews Dept." which featured news clippings of the accomplishments of ST actors and staff. There were technical reports on Star Dates, the transporter... Fannish news included reports on ST revival, a short guide to sf fandom, an episode list including a guide to filmclips, con reports, con announcements, fanzine announcements, fanzine reviews, one of the first listings of the STW address, one of the first fan surveys (by Jacqueline Lichtenberg), a loc column, and updates to the ST Concordance...

Finally, T-Negative stands as a chronology of ST fandom for the '70's. T-Negative #1 began with an announcement that it would be a showcase for ST fiction... [and] it succeeded admirably. In addition to the other milestones... there was news of Spock Must Die! (the first pro ST novel), the first fanzine directory (from the LNSTFCF... listing 59 fanzines), an announcement by D.C. Fontana of the possibility of a ST movie, the announcement of the ST animation, and Genesis II. Through various listings, one can get an idea of fanzine publishing history [through its ads for available zines]...'

In all these things, T-Negative is an outstanding achievement in fan publication. It is a testimony to the talent of its editor, Ruth Berman. Both are regarded with affection and esteem by ST fanzine readers everywhere -- a reputation well deserved. 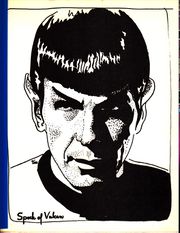 front "cover" of the special art portfolio, undated. It was also the cover for the first issue.

This art was made available on an unknown date. It contains 15 pages of art by Tim Courtney.

A similar project was Leonard Nimoy as Mr. Spock 1972 Calendar.

From issue #23: The editor responds to a letter from a fan asking if she had ever thought of printing separate copies of Tim Courtney's art so she could matte them for display:

I suppose it would be easy enough to do. I think there'd have to be about 100 people wanting to get the set to make it economical. If, say, I made up a booklet of the half dozen or so Courtney covers, plus a few by other artists, plus some photo pages, 15-18 sheets, I suppose I could sell it as an extra issue of T-N. Those who wanted it could have it sent with the following issues of T-N, reducing their subscriptions by one, or could buy it separately for fifty cents.