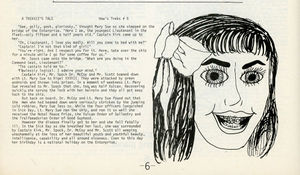 the fic, and an uncredited illo

A Trekkie's Tale is a short 1973 Star Trek: TOS parody. It is the fanwork that formally introduced the concept of Mary Sue.

"A Trekkie's Tale" was published in the print zine Menagerie #2 and was "How's Treks #5," one of a number of short parodies in that zine series. Though the author is listed as Anonymous in the zine's table of contents, the author is Paula Smith.

Though the fact that "Mary Sue" originated from a short Star Trek parody fic is still far from common knowledge in fandom, "A Trekkie's Tale" has attained a degree of infamy in the decades since its publication with fans delightedly (or sometimes not-so-delightedly) discovering and sharing this piece of trivia. Some essays and analyses have been published that examine the evolution of Mary Sue from her Trek origins. Smith has also spoken about the specific inspiration for the fic (see: The Originator of the Term "Mary Sue"), further situating "A Trekkie's Tale" and Mary Sue within the fandom trends of the time.

"Gee, golly, gosh, gloriosky," thought Mary Sue as she stepped on the bridge of the Enterprise. "Here I am, the youngest lieutenant in the fleet - only fifteen and a half years old." Captain Kirk came up to her.

"Oh, Lieutenant, I love you madly. Will you come to bed with me?"

"Captain! I am not that kind of girl!"

"You're right, and I respect you for it. Here, take over the ship for a minute while I go get some coffee for us."

Mr. Spock came onto the bridge. "What are you doing in the command seat, Lieutenant?"

"The Captain told me to."

"Flawlessly logical. I admire your mind."

Captain Kirk, Mr. Spock, Dr. McCoy and Mr. Scott beamed down with Lt. Mary Sue to Rigel XXXVII. They were attacked by green androids and thrown into prison. In a moment of weakness Lt. Mary Sue revealed to Mr. Spock that she too was half Vulcan. Recovering quickly, she sprung the lock with her hairpin and they all got away back to the ship.

But back on board, Dr. McCoy and Lt. Mary Sue found out that the men who had beamed down were seriously stricken by the jumping cold robbies, Mary Sue less so. While the four officers languished in Sick Bay, Lt. Mary Sue ran the ship, and ran it so well she received the Nobel Peace Prize, the Vulcan Order of Gallantry and the Tralfamadorian Order of Good Guyhood.

However the disease finally got to her and she fell fatally ill. In the Sick Bay as she breathed her last, she was surrounded by Captain Kirk, Mr. Spock, Dr. McCoy, and Mr. Scott, all weeping unashamedly at the loss of her beautiful youth and youthful beauty, intelligence, capability and all around niceness. Even to this day her birthday is a national holiday of the Enterprise.

The Originator of the Term "Mary Sue"

It was "A Trekkie's Tale" that caused Paula Smith to create the term Mary Sue.

In a 2010 interview with Cynthia W. Walker at MediaWest*Con 30 that was later published in Transformative Works and Cultures, Smith recalled that the inspiration for her parody Mary Sue was:

a main story [in every Trek zine that she read] about this adolescent girl who is the youngest yeoman or lieutenant or captain ever in Starfleet. She makes her way onto the Enterprise and the entire crew falls in love with her. They then have adventures, but the remarkable thing was that all the adventures circled around this character. Everybody else in the universe bowed down in front of her. Also, she usually had some unique physical identifier—odd-colored eyes or hair—or else she was half-Vulcan. The stories read like they were written about half an hour before the zine was printed; they were generally not very good.

Then came along this one story. ... This particular one not only had the young teenaged girl who was a lieutenant come on the bridge, where Kirk and Spock immediately fell in love with her—I think Scotty and McCoy did as well—but they all backed off and were very respectful because she only had eyes for Chekov. So during the adventure, everybody beams down to the planet and everybody gets captured by the aliens, and this character manages to spring them because—literally—she has a hairpin. When they get back to the ship, she's sick. She had caught something down there and she dies. And then she resurrected herself…[1]

Though Smith couldn't recall the name of the zine the story was printed in at the time, it has been identified as Double Exposure.

Smith went on to explain how "Mary Sue" became a shorthand for a particular character trope that she and others had identified in fanfiction:

PS: Anyway, because this was still the early 1970s, there were still a ton of these stories coming out. So, when we wanted a shorthand to refer to them, Sharon and I began to call them "Lieutenant Mary Sue" stories. We explained why the first couple of times we used it, but the term caught on because she's very identifiable: Here it is, that same character, and isn't it a shame because she's just so tiresome.

And then in the letter columns, we started seeing the writers react: "What's so wrong with my story? I'm just telling a story that I think is great." And we would fire back: "Yeah, but the problem is, the presence of the Mary Sue warped all the other characters in the story away from their known characterization." Because in fan fiction, you aren't writing stories about an unknown universe, and readers expect certain characterizations.

Q: So people began to pick up the term?

PS: Sharon and I were driving it, of course, by saying this is a Mary Sue story, this is not a Mary Sue story. We did panels at some of the first media conventions, and there would be lively discussion: what does this mean? The concept spread and was taken up by other people. It wasn't always used as a derogatory term. The Mary Sue seemed to almost be a necessary stage for a writer.

Star Trek Fandom and Beyond: The Evolution of Mary Sue

In the essay A Historical Perspective on Mary Sue, posted to Fanfic Symposium, Laura Hale traced the evolution of Mary Sue from her origins in A Trekkie's Tale (miswritten as "A Trekkers Tale") to a pop culture term:

The origins of the first story with the Mary Sue archetype, they are unknown. What we do know is that in Menagerie #2, a story was published in 1973 that was written by Paula Smith. The story was title “A Trekkers Tale.” It featured a character named Lt. Mary Sue. This story, written as a piece of satire, mocked the genre of stories that had sprung up featuring female characters that were involved with Kirk or Spock, Bones or Sulu, characters that could and did save the day when the heroes could not.

In 1980, according to Verba, frustrated Star Trek fan fiction writer Virginia Zanello wrote story called “Side Trip” which answered the question of how would the crew of Enterprise act if an actual Mary Sue showed up on the ship. This indicates a sense of Mary Sue fatigue happening in the Star Trek community. Make them stop! Make them stop! This angst and satire would continue into 1983 when “Marisoo Tudewesque” written by Sharon Macy was published. Members roared and like today, nothing happened: Mary Sues continued to be written and published in fanzines.

By 1980, multimedia fanzines were in circulation and members of the original Star Trek fan fiction community had begun to migrate to other communities. They took their experience with that story which appeared in Menagerie #2, the series that Paula Smith created based on it titled “The Adventures of Lt. Mary Sue” and other discussion and put it into their own fannish context. Terminology crossed fandoms. Yes, the truth is here: Mary Sue was now to be found in Blake’s 7 stories.

But now, by 2002, the definition of Mary Sue began to change as Mary Sue became further and further removed from her roots. In communities like Harry Potter, on sites like SugarQuill, the community took their understanding of Mary Sue, which was filtered through several layers of various fen, and came to a new understanding. [...] There was and is no going back to the original definition, created by Paula Smith, perpetuated by satirists like Sharon Macy and Virginia Zanello, discussed by various communities like Blake’s 7 and comics, and more clearly defined again by Missy Reimer.[2]

In a sense, all manner of fanworks that feature Mary Sues (whether as parodies, homages, critiques, or something else) could be considered transformative works of 'A Trekkie's Tale', but the work has also inspired some more direct transformations. One contemporary example is a series of fics in The Hole in the Deck Gang Newsletter, "The Adventures of Lt. Mary Sue", which featured the original Mary Sue interacting with con gofers. The newsletter was co-edited by Paula Smith.

Other works include a dramatic reading of the fanfic by TheDramaticReadings, as well as a meta essay, Ship's Log, Supplemental: A Trekkie's Tale that deconstructs Smith's intent with the (often misinterpreted) story and sets it in the context of 1970s Star Trek fandom. In 2019, Mr. Jackson created an 'animated film' version of the fic: Mary Sue story. "A Trekkie's Tale".

Many, many fans have expressed their opinions about Mary Sue. For some of them, see Category:Mary Sue Meta and Timeline of Mary Sue Meta.

See Mary Sue for general reactions to the concept.

Wow...my favorite thing in the whole universe, Star Trek started the thing I hate the most, Mary sues...thats not logical[3]

After a lot of searching, and then giving up, this little piece of fanzine history popped up in an eBay listing (in a bulk lot of Star Trek fanzines, no less.) Menagerie #2 is famous for one specific story, “A Trekkie’s Tale” by “Anonymous” (Actually editor Paula Smith.) This tiny little parody piece is a fundamental icon of fanfic history: it’s the story that gave the Mary Sue her name. This little poke at all the self-insert fantasy submissions the editor had to read gave all of us a handy label for the character type, one that is still being used over 40 years later. That’s a pretty good legacy for quick little frustration fic! ... #I've wanted to own this for a loooonng time #And now I do #How cool is that? [4]

Man, I remember that when I first stumbled upon A TREKKIE'S TALE I was kinda disappointed that it was pretty... normal. The original Lieutenant Mary Sue was paradoxically nowhere as Sue-ish as some characters in today's media and Internet.[5]

Ah, the origin of the Mary-Sue herself! What horror!
For a terrible story, it actually has decent spelling and grammar.


Thank you for sharing this (I do realize it's satire). I got a good laugh![6]

Kirk is perfectly in character. Fight me[7]