TWC defines its purview as 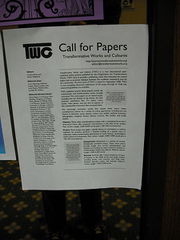 These often interdisciplinary essays with a conceptual focus and a theoretical frame offer expansive interventions in the field of fan studies. Theory essays undergo blind peer review. (5,000–8,000 words, plus a 100–250-word abstract)

These essays analyze the particular, in contrast to Theory's broader vantage. They may apply a specific theory to a formation or artifact; explicate fan practice; perform a detailed reading of a specific text; or otherwise relate transformative phenomena to social, literary, technological, and/or historical frameworks. Praxis essays undergo blind peer review. (4,000–7,000 words, plus a 100–250-word abstract)

Inspired by The Fanfic Symposium, a meta website which ran from 1999 to 2006, TWC publishes "Symposium," a section of the journal for non-peer reviewed essays:

"Parallel to academia's tradition of compact essays, often published as letters, fandom has its own vibrant history of criticism, some of which has been collected at the Symposium archive. In the spirit of this history, TWC's Symposium is a section of concise, thematically contained essays. These short pieces provide insight into current developments and debates surrounding any topic related to fandom or transformative media and cultures. Symposium submissions undergo editorial review." [2]

The Symposium Blog[3] associated with TWC posted infomal meta, to create a "bridge between the OTW’s academic journal and fannish discussions, through posts that discuss both fannish meta topics and fannish perspectives on fan and media studies." [4]

Reviews offer critical summaries of items of interest in the fields of fan and media studies, including books, new journals, and web sites. Reviews incorporate a description of the item's content, an assessment of its likely audience, and an evaluation of its importance in a larger context. Review submissions undergo editorial review. (1,500–2,500 words)

Interviews are editorially reviewed and can be submitted by readers or solicited by editors.

Issue No. 1 of TWC appeared on September 15, 2008. It includes Francesca Coppa's seminal essay on the history of vidding, Women, "Star Trek," and the early development of fannish vidding, and a range of essays on fandom and fan works from Abigail DeKosnik on politics as fandom and Anne Kustritz on The Story of Obi to Rebecca Busker on meta discourses in fandom and an interview with Henry Jenkins.

Issue No. 2 (March 15, 2009) is a special topic issue on "Games as transformative works," edited by Rebecca Carlson. The issue combines various accounts of online play, especially World of Warcraft, with essays ranging from card collectors and table-top and live action role-playing games to chiptunes and machinima.

Issue No. 3 appeared on September 15, 2009. This general issue expanded the range of the journal with essays on quilting, fannish wikis, and filk communities as well as an important reflection on fannish race conversations with Pattern recognition: A dialogue on racism in fan communities

Issue No. 4 (March 15, 2010) is a special Supernatural issue, "Saving People, Hunting Things," edited by Catherine Tosenberger. The issue approaches the television show and its fandom from a variety of disciplines and approaches and discusses the role of religious, the supernatural, and folklore as well fannish creations ranging from specific fanvids and mpreg.

Issue No. 5 appeared on September 15, 2010. This general issue contained a range of essays on various forms of fan production (including fan subbing and fan films) with a particular emphasis on concerns of the body and disability in fandom.

Issue No. 7 appeared in August 2011 and was a general issue with several articles about aspects of fan identity.

Issue No. 8 appeared in November 2011 and was a double guest-edited issue on the topics of "Race and Ethnicity in Fandom", guest edited by Robin Anne Reid and Sarah N. Gatson; and "Textual Echoes", guest edited by Cyber Echoes.

Issue No. 20 appeared in September 2015. The anniversary was commemorated by OTW communications with three events: a special post on Symposium, Symposium By and For Fans; an interview with three contributors, Spotlight on Journal: Twentieth Issue Celebration; and a chat session with several Symposium contributors, see TWC Panel Chat: 2015.

Issue No. 22 appeared in September 2016, and was a general issue containing essays on topics such as Star Trek, Hillary Clinton remix videos, "Brony" identity and anime music video fandom.

Issue No. 28 appeared in September 2018, The Future of Fandom, special 10th anniversary issue.

Issue No. 29 appeared in March 2019, Fans of Color, Fandoms of Color, guest edited by Abigail DeKosnik (UC, Berkeley) and andré carrington (Drexel U).

Beginning with issue No.34, full PDFs of the issues are available in the editorial:

TWC is a Gold Open Access publication of the nonprofit Organization for Transformative Works, copyrighted under a Creative Commons Attribution-Noncommercial 3.0 Unported License for issue Nos.1-24 and a Creative Commons Attribution 4.0 International License for issue No.25 and beyond. For an explanation of the journal's reasoning, see the editorial, Copyright and Open Access.

TWC is indexed in major academic databases, open access directories, and services such as Google Scholar. The journal is a member of the Directory of Open Access Journals.

Bibliographical data for all articles published in TWC is recorded in Zotero as a subcollection of the Fan studies bibliography, a project affiliated with the journal.

See also: Bibliographical list of all articles 2008-18 with links

The editorial team for 2007 - present includes: