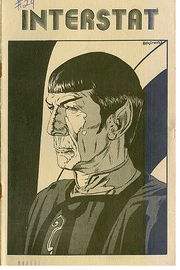 cover of Interstat #29 portrays Spock, one of Vulcan's most well-known former residents

Vulcan is the name of a humanoid species and their home planet in the Star Trek universe. The primary characteristic of Vulcans is an adherence to logic and a rejection of emotional reasoning. Physically, they are humanoid, with pointed ears and slanted eyebrows the most visible features distinguishing them from humans. They are also known to have green blood and are touch telepaths.

In fandom, Vulcans are among the most well known of the Star Trek races, likely superseded only by Klingons in their popularity. Vulcans probably owe this popularity to the original series character most beloved by fans, Spock.

Vulcans were first introduced in Star Trek: The Original Series with the character of Spock. TOS provided the basis for all subsequent development of Vulcan culture. Roddenberry conceived the character of Spock first and by his own report had to "work backward" on some of his characteristics -- what kind of world would a person like that have come from? He established that Vulcan was a hot, largely arid world, much larger than Earth, thus accounting for Spock's extreme physical strength.

In "Amok Time", Theodore Sturgeon added that the atmosphere there is thinner than Earth's, which (some fans pointed out at once) is not consistent with a large heavy-gravity world. He said "Vulcan is characterized as "a 'hot' planet... yellow, orange... no cool colors about it." The area where the wedding takes place is "a landscape of drifting sand stretching away to a distant saw-toothed line of mountains jutting up at the edge of the far horizon." He had Spock explaining to Kirk and McCoy that, due to his biology, he can instinctively sense when he is nearing Vulcan.[1] Sturgeon conceived Vulcan culture as highly advanced but with an evolved appreciation for craftsmanship as opposed to high technology. He also specified how the people should be dressed in the wedding scene, and provided a number of Vulcan language words and concepts that didn't make it into the final cut.

D.C. Fontana's episode "Journey to Babel" was supposed to show a Vulcan city and Spock's family home, but it was too expensive. She only really got to develop Vulcan in the animateds. She said,

Any story on Vulcan that came up on the original show faced two problems. First, all available outdoor location sites looked like Earth – Southern California, to be exact. Second, sets built on the stage suffered from the slightly artificial look all such sets suffer – and we could only afford one major set of this kind. Thus, scope was also limited. Animation, however, would allow us to show the planet Vulcan any way I saw fit. Although it had been established in 'Amok Time' that most of the planet was desert, I wanted to depict other aspects of Vulcan." Thus, the episode "Yesteryear", from the animated Star Trek series, establishes such expansive sites as ShiKahr, which Fontana characterized as "the foremost city of Vulcan."[2]) 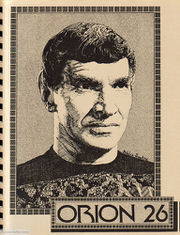 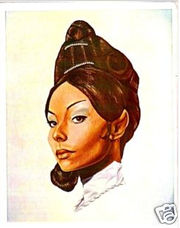 back cover of Off the Beaten Trek #3 by Monica Miller portrays T'Pring, a Vulcan bride of note

The Star Trek tie-in novels expanded greatly on Vulcan culture. The following are some Vulcan-centric novels.

At any Star Trek convention or event, you will see Vulcan cosplayers right there beside the Klingons. In fact, the image of a Star Trek fan wearing pointed ears and a Starfleet uniform is the iconic "Trekkie" to the outside world.

Beyond fan-focused events, Vulcans are part of popular culture. In 2010, the town of Vulcan, Alberta (a place named for the Roman God of fire) commissioned a bust of Leonard Nimoy as Spock and presented it to him.[3] During his campaign for President of the United States, Senator Al Gore's calm affect and slightly droning speech got him labeled "a gay Vulcan" by Bill Maher. The wisecrack was later picked up by Ann Coulter.

The very first fanzine, Spockanalia, was Vulcan- and Spock-centric. Contributors wrote articles of speculation on Vulcan culture and physiology. This was not sex-related, as today, but focused on things like the construction of the Vulcan heart and blood chemistry. Articles on Vulcan sexuality concerned the pon farr and speculations on Spock's conception and birth, in general staying within canon limits. The few relationship stories paired Spock with women, usually Vulcan or Vulcan/human women, or human telepaths who had studied on Vulcan.

There were many other early Vulcan-centric fanzines, including T-Negative, where the first Kraith stories were published, Eridani Triad, which focused on Surak and the reforms he brought to Ancient Vulcan, and the publications of fan clubs like Terra Vulcan and the Kraith-based Society for Earthbound Vulcans. There were Vulcan songs, poems, recipes and artwork. A Kentucky fan group planned in the early 1970s to create a small commune or co-op where they planned to live as close to the Vulcan way of life as possible.

Some of the earliest fanfic stories to feature Vulcan (not just the planet but the culture) were those in the Kraith shared universe. The earliest were written by Jacqueline Lichtenberg beginning in 1969, in the T-Negative fanzine, and continued through the first few years after the cancellation of the original TV series. The stories are named after the "Kraith", a goblet or chalice used in the performance of certain Vulcan rituals, featuring prominently in several of the stories in the sequence. By the time interest in Kraith had waned, over 50 writers had written stories in the universe.

Fans have spent a lot of energy and time speculating about the biological aspects of Vulcans.

There is much discussion about Spock's genetic make-up, the improbabilities of his conception and gestation, and much more in the discussions in the letterzine Halkan Council.

Another discussion regarding this topic was a 1976 panel at SeKWester*Con, Too. See The Vulcan Human Hybrid.

Hairy or not? The one time we saw him with his shirt off, Leonard Nimoy as Spock had plenty of chest hair.

Some anecdotal thoughts: most fiction describes Spock's chest as smooth. It tends to be fanart that portrays him with more hair. Also, Spock has grown less hairy in chest over the years.

While not biology but personal style, see Long-Haired Spock.

Only a few Vulcan words were ever used in aired canon, most of them in the episode "Amok Time." Of course, fans quickly filled that void and created their own Vulcan languages, or at least a few expressions that could be dropped into daily speech. 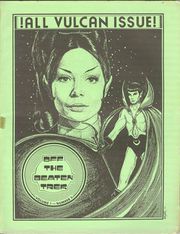 Off the Beaten Trek #3, an All-Vulcan issue