From Fanlore
(Redirected from Star Trek (2009))
Jump to: navigation, search 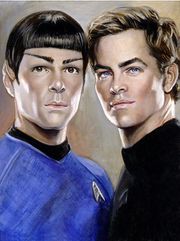 In May 2013, this movie was followed by Star Trek Into Darkness, a What If? retelling of Star Trek II: The Wrath of Khan, in which "John Harrison", revealed to be Khan Noonien Singh, goes rogue, complicating the evil plans of Starfleet Admiral Marcus, father of Dr Carol Marcus. Spock seeks counsel with his older, Prime Universe self on how to defeat Khan. In this version, it is Kirk who saves the ship and dies in the radiation chamber, and Spock who shouts "Khaaaaaan!" McCoy is able to revive Kirk by using Khan's genetically engineered blood.

Star Trek Beyond arrived in cinemas in July 2016. Spock and Uhura have put their relationship on hold, and it is learned that the elderly Spock Prime has passed away. The USS Enterprise is overwhelmed by a swarm of thousands of small, heavily-armed alien ships, a ploy unleashed upon them by an alien, Krall, who is building a powerful bioweapon. The Enterprise's phasers, navigational deflector, and warp nacelles are destroyed within minutes. The crew escapes to a primitive planet, where an alien scavenger named Jaylah leads Kirk to the crashed Starfleet vessel, USS Franklin. Krall and his crew have a secret link with the century-old Franklin. After saving the personnel of Yorktown (the Federation's newest and most advanced starbase) from the bioweapon, Kirk turns down a promotion and is rewarded with a new Enterprise (NCC-1701-A).

The new movieverse fandom (variously known as Star Trek XI, Star Trek Reboot, AOS[2] or Kelvinverse[3]) took off rapidly after the film's release, attracting both fans of the original series and people new to the franchise. It's notable that there has been some reluctance from more devoted TOS fans to this trilogy by Abrams, especially when it comes to Kirk and Spock fans -- gen or slash relationship.

However like every reboot it brought new souls to the ship it is to be trekker, releasing new pairings and deepening other versions of old ships -- aka. Spirk.

Unfortunately, the second film in the reboot series, Star Trek: Into Darkness, was not as well received by fans and expert critics. But when Star Trek: Beyond was released in 2016 with better reception, mainly for the LGBT performance of the Sulu character -- George Takei actor performing Sulu in TOS disagreed with this re-imagination, saying it went against Gene's original wishes for Sulu.

From the start, there have been criticisms regarding JJ Abrams' handling of the series in particular. Mainly with regard to the presentation of "poor quality" of characters like Kirk and Spock and "sexist" of almost all female characters.[4][5][6]

However, Star Trek fandom is hard to kill, and as of 2019 the fandom continues, with a beautiful restart that once again brought the fans and fandom to infinity and beyond.

The most popular het ship is Spock/Uhura. While some fans noted flirtatious moments between Spock and Uhura in TOS[8], a romantic relationship is new, and unique to the movie's canon. The Spock/Uhura Shippers community is highly active, with more than 1000 members in May 2009, rising to over 1900 members by July 2010.

The third movie, Star Trek: Beyond presented Sulu as having a male partner, called Ben, and a young daughter Demora. In Star Trek: Generations (1994), Demora Sulu was the helmsman aboard the Enterprise-B, and continued her father's legacy.

While many TOS fans welcomed newcomers, others regard movieverse fans with dislike. [9] [10] In the months following the movie's release, members of some TOS discussion lists debated the place of reboot in long-standing fandoms such as K/S, with some lists, such as KirkSpockCentral on Yahoo choosing to remain focused on TOS, stating that 'reboot' K/S is regarded as an entirely different fandom, while others such as Kirk-and-Spock on Yahoo and kirkspock on LJ opened their doors to all incarnations of K/S (TOS, TAS and AOS).

When the film came out in 2009, Uhura was been heavily criticized by some segments of fandom. Some fans feel that Uhura is nothing more than "The Girl," and serves no purpose outside of her romance with Spock. Other fans claim that Uhura is nothing more than a Mary Sue (some people having gone so far as to call her a "whore"). [11] [12] [13] However, Rawles pointed out that the "reduced to The Girlfriend" interpretation ignores the fact that "Nyota Uhura is not a white girl"; during (but not limited to) the era of the original show's run, black women were not seen as legitimate objects of romantic interest, so Uhura's relationship with Spock represents a step forward.[14]

After the movie came out an online petition was created to promote LGBT issues by pushing for a gay couple in the next movie. The petition is called "Social Equality Effort"(SEE)[15][16].
The idea seemingly came out from a thread in one of the main star trek fanboards over the fanfiction.net site in which some dedicated K/S fans, upon reading a popular K/S slash fanfiction ("Home"), decided to take some action in attempt to convince the writers of the potential of a gay relationship between K/S in the next movies. [4]. The online petition, that was originally supposed to be called "K/S Mainstream Effort" was in fact named "The Social Equality Effort" instead.
Initially focused on the inclusion of a same-sex relationship, the petition soon started to be perceived by the fans (including many slash fans) and many members of the LGBT community itself as an ill disguised attempt to make Kirk/Spock canon. Many raised concerns about the petition as it asked to break up an interracial couple (Spock/Uhura) that is already canon just to pair Spock with Kirk even though the writers could include other gay relationships/characters without having to sacrifice an existing canon pair. [17], [18], [19], [20]

"Instead of getting racism activists on board, we are forcing them to choose between supporting an interracial (and yes, also interspecies) relationship and supporting a gay one. Are we really going to make people choose? Uhura is an important character, not only by being a person of colour but also one of the few main female characters, and how other characters interact with her is also important" - A K/S fan that disagreed with the petition[20].

On July 24, 2009 It was decided to change the focus of the campaign away from specifically Kirk/Spock due to all of this criticism.[21] The result is that the petition itself was re-worded. However, most of the comments on the site left by the people that signed the petition still specifically ask for Kirk/Spock only.