Are you looking for the pairing of Kirk/McCoy from the original television series? See Kirk/McCoy (TOS) 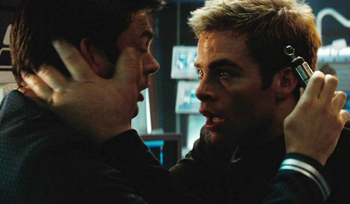 kirk_mccoy was created on May 11, 2009, three days after the Star Trek (2009) film's wide release. jim_and_bones was created as Team Jones headquarters in the Star Trek Ship Wars (later Ship Olympics) competition on January 5, 2010, and reopened following the conclusion of the Wars as the new Jim and Bones community on June 1, 2010. buckleup_meme was created on January 7, 2010.

Unlike TOS Kirk and McCoy, who became friends a decade later when both were already established Starfleet officers, AOS Kirk and McCoy met in their twenties when both were at low points in their lives -- Kirk an aimless genius-level brawler doing nothing to live up to his dead father's heroism, and McCoy embittered enough by his recent divorce to consider a career in space, despite his 'fear of dying in something that flies'. A rant about disease and danger and a shared flask of alcohol cemented the beginning of what would become a close and lasting friendship.

The kinship between these two characters, an odd couple in many ways yet still somehow complimentary (one southern, one midwestern, one a leader, one a healer, one proactive, one emotional, and so forth), proved to be a goldmine for fanfiction authors. To span the three years glossed over in the film, a plethora of Academy fic (often very similar to the College AU genre) came into being, in which Kirk and McCoy are more often than not envisioned as roommates and best friends verging on codependency.

Kirk/McCoy and Star Trek Into Darkness

The second alternate universe Star Trek film was released in May 2013, to moderate critical acclaim but mixed fandom reception. The film was mostly concerned with the testing of Kirk's leadership abilities as well as his developing friendship with Spock; the artistic response from the Kirk/McCoy community was relatively muted in comparison with the 2009 movie. Much post-Into Darkness Kirk/McCoy fanfiction is centered around Kirk's resurrection from death - and the emotional and physical consequences thereof - thanks to a serum developed by McCoy from the 'magic blood' of Khan Noonien Singh.

AU fanfiction is common. Alternate universe depictions of Kirk/McCoy include:

Tropes found in Kirk/McCoy fiction, often in combination with the above, include:

A frequent permutation of the K/M relationship is its expansion to include Spock. Other arrangements include Kirk/McCoy/Spock/Nyota Uhura (thereby respecting Spock/Uhura's canon status and reflecting Uhura's increased presence in the reboot), as well as Kirk/McCoy/Christopher Pike (Kirk/Pike and McCoy/Pike, though relatively uncommon pairings, have some fandom presence).

The popularity of AOS Kirk/McCoy has also given rise to the RPF pairing of actors Chris Pine and Karl Urban. Sometimes referred to as Urbine, the ship has its own community, pinecity (289 members as of July 3, 2014), though Urban/Pine fanworks and discussions are also posted at kirk_mccoy and jim_and_bones. Pine and Urban at the Star Trek Into Darkness premiere in Sydney, Australia