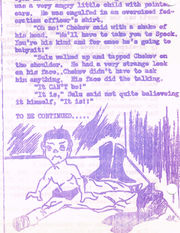 Art from "Oh To Be Young Again...!!", 1969, a Star Trek story in The Crewman's Log. Probably the earliest example of this trope in media fandom fiction 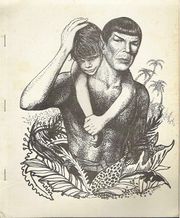 The front cover of The Child Within Us portrays Spock and a de-aged Kirk: written in 1981. The art is by Michael Verina. It is an example of rare (in Star Trek) and early (in any fandom) de-aged story.

De-Aging is a story trope where adult characters are turned back into children or younger adults. The transformation can be fully physical and mental. It can also be a physical transformation that leaves the adult mind in a younger body; or the opposite, where the mind is reverted to a child-like state, but the body remains as-is.

It is a popular genre in fandoms that allow for magic, such as Harry Potter, or have wacky science fiction technology that writers can use in lieu of a magic wand. De-aging can be written as humor, even crackfic; or as hurt/comfort, forcing characters to take care of each other. The story can also be a serious examination of changed power dynamics in the character's relationships.

In some fandoms, de-aging of certain characters to a younger adult or teenager is used to explore the sexual dynamics of a pairing where a perceived age gap now exists. It can also be used as a way to write underage stories that aren't "really" underage. In SGA fandom, photos and film clips from David Hewlett's days as an attractive younger actor contributed to the popularity of de-aged Rodney McKay stories.

In stories where only the character's mind is affected, the trope can come perilously close to AU stories that depict real mental disability with all the risks of ableism that comes with that territory. (See Disability fic for more details.)

De-aging is the opposite of aging characters up.

Fantastic Beasts and Where to Find Them: