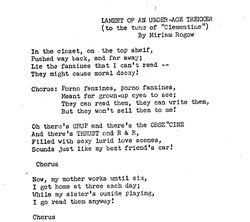 A filk by a fan (age about 14) printed in Grip #3 (1978). Note that the fanworks cited range from very sexually explicit to very mild sexual or intimate descriptions or portrayals. Until fairly recently, same sex fanworks, regardless of their content (including passing references to, and, implied), ALWAYS required an age statement and were off-limits to minors.

Underage may also be used to describe fans who are under 18 or not legally adult and Minors in Fandom. Many fan communities where sexually explicit fanworks are common have rules banning underage fans from joining. These rules usually rely on age statements or ages provided in user profiles on social networking sites.