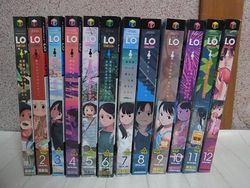 The 2016 issues of the monthly lolicon anthology Comic LO. Many authors also have a presence in fandom, such as doujinshi conventions.

Lolicon interacts with the Japanese moe and cuteness cultures, and broader pop culture tropes. It's mostly used in reference to Japanese media, particularly anime, manga, light novels, or video games, and especially sexual material. It's a popular genre in doujinshi, and there exist several commercial serialised original fiction anthologies,[5] with a large intersection with fannish communities.

"Lolicon" is also used to refer to fans of such material, or interest in young girls in general. This use is less common outside Japan, where focus is primarily on the genre. Sometimes, it's used as a synonym for gynephilic pedophiles, although academics caution against conflating the terms.[6][7]

The term "Lolita complex" first appeared in American author Russel Trainer's titular book, The Lolita Complex,[8] and it may have influenced usage in Japan. Lolicon is said to draw from shoujo and magical girl works; works such as Lupin III: The Castle of Cagliostro and Magical Princess Minky Momo were particular sensations. The origins of the genre lie in doujin works,[8], and girls' and yaoi manga in particular[9] where they still have a strong presence, such as in Comiket. Female authors, such as Kaworu Watashiya, remain influential, though some claim that interest in the genre is at least partially due to its non-feminist characters.[10] Some authors connect lolicon to "junior idol" publications.[11]

Like underage, lolicon is often criticised for being child pornography, both within fannish contexts[12] and outside them.[13] It frequently generates wank. Its legal history is often complicated or ambiguous,[14] even within Japan.[15] Fandoms have been targeted for content purges in Livejournal, Reddit,[16] Tumblr, and even 4chan.[17] Professional authors have opposed attempts at an institutional ban.[18]

Lolicon has been a topic for debate in fannish communities for a long time. For example, in a 2009 forum thread titled Why the f**K would anybody defend Lolicon?, a fan said:

I'm just sick people saying its just art, real kids aren't involved so it doesn't count. Pedophilia is wrong in all mediums no matter if its real, computerized or on paper, its still the concept of kids having sex. And they say that they don't support pedophilia, pure hypocrisy. All of these people are closet pedos. Its just makes me sad and angry.

Get over it. You're nineteen, and you haven't yet accepted that what people are sexually attracted to is not within their control? Because it isn't. And being bigoted against people for that reason is degressive.

A lot of the arguments (and counter-arguments) mirror discourse on underage that surfaced much later, for example 2016's AO3 Content Discussion. There are also some similar discussions during Strikethrough and Boldthrough due to the nature of some of the removed content.

The debate isn't confined within fannish spaces; for example, lolicon has been covered by BBC a few times.[13] Many fans weren't happy with the editorial decisions of the organisation. Two years later, following an interview, an industry veteran also noted the differences in perspective, which made mutual understanding difficult:

Attitudes within Japan are also varied. In 2013, a mangaka wrote in the afterword of his doujinshi about his struggles with censorship in law, and in administration:

According to Japanese law, especially the one concerning the "crime of distribution of obscene material," you're not allowed to show or distribute drawings and/or photographs in this country that cause people to become sexually aroused. It doesn't matter if the creator, the observer, or the subject of the imagery are all adults. [...] So what is it that exactly wrong with being sexually aroused? You won't be able to do any work? It'll induce you to commit crimes? Aren't you just treating fellow citizens as criminals-inwaiting? People can now see uncensored imagery by accessing foreign servers, yet hasn't the rate of sex crimes dropped? Have public order and morals deteriorated to the point where this country is unlivable because of that new reality?

Although lolicon and lolita fashion are separate subcultures, they sometimes intersect.