Danbooru is an imageboard whose mission is to be "a repository of high-quality anime-style art and doujinshi". Most of the content is fanart, but original art is not rare. Some of the userbase's perennially popular fandoms include Touhou (majorly so), Kantai Collection, Vocaloid, and Idolmaster.

Images (known as "posts" in the site lingo) are tagged thoroughly by the userbase with the fandom, characters, and artist, plus additional tags to indicate other details, which could be anything from character's clothing, pose, objects in the image, the artistic composition, whether the image contains spoilers, etc. A few aspects that are not tagged include anything subjective such as "awesome" or "sexy", as well as specific relationships (although they do tag ship categories: "hetero", "yuri", "yaoi", "bisexual (female)", and "bisexual (male)").

Fandom tags and character tags are standardized to the language of the original media (except that they are romanized into Latin characters). However, exceptions are made for fandoms that already have "English names firmly established in their respective active communities", such as Fullmetal Alchemist, Azur Lane, The Legend of Zelda, Spice and Wolf, etc.[1]

In addition to being tagged, posts can be organized into one or more "pools" which are collections of images that either are sequential (such as webcomics or doujinshi) or that fit a certain theme which is not suitable for tagging (such as "Reaction Faces" or "The Most Unlikely Crossovers")

Posts usually undergo a moderation period of three days: if a user with "Post Approver" permissions doesn't approve the post (agreeing that it meets the site's quality standards and doesn't violate any rules) in three days, the post is deleted. ("Deleted" posts still remain on the server but are not visible to standard users; this is so that the similar image searcher can detect if someone tries to upload the same post again.[2]) Users with certain permission levels are exempt from their posts going to the approval queue. 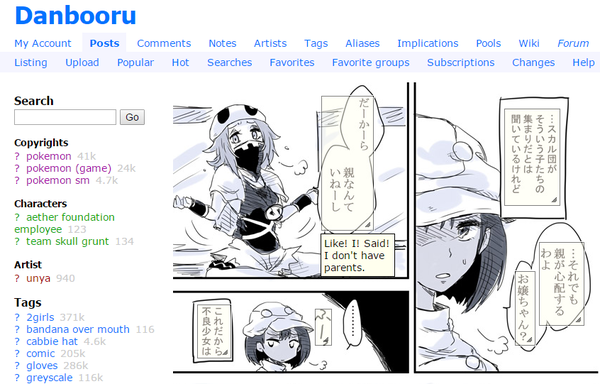 Screenshot of the Danbooru site layout showing a page of a Pokémon Sun & Moon fancomic with translation notes. "Copyright" is the term used on Danbooru to indicate fandoms, in this case "pokemon" the umbrella tag, "pokemon (game)" to distinguish from the anime and manga, and "pokemon sm" for the specific games. The characters, artist, and general tags are also listed.

Danbooru has a forum, but it is strictly for discussion of site issues, not anything else. Users socialize through commenting on posts. Comments and posts can be upvoted and downvoted, but site admins are generally against implementing any other "social media" type of features, such as user icons, etc.

Pixiv is a major source of posts on Danbooru.

The site also has a feature to "soft-translate" text in the images through transparent, hoverable "notes" placed on the image.

Artists posting their own work is frowned upon, because "artists tend to be biased when it comes to judging the quality of their own work" and allowing this would lead to "a sudden spike of sub-par uploads".[3]

Danbooru also has an extensive wiki feature that users use to provide tagging help by describing characters, series, memes, and other things that warrant a tag.

A long-time mod of the site, 0xCCBA696, explained the origins of Danbooru:

The site URL is danbooru.donmai.us - "danbooru" is the Japanese word for "cardboard box" and "donmai" is a Japanese contraction of the English "don't mind", meaning "don't worry about it".

Circa 2007, Danbooru was down for a while, and a site named Sagubooru attempted to fill the gap, but was unsuccessful.[5]

An official semi-mirror site called Safebooru used to exist that displayed only the Rated:Safe images. This was created in 2009 by Albert (and was originally called "notdanbooru", but later changed to "Safebooru").[6] Some years later, Safebooru "was killed off because it was taxing on the servers with not a lot of benefit."[7] Safebooru was recreated later as a separate site unaffiliated with Danbooru.

Like many imageboards, artist permission is not obtained before posting an image on Danbooru. However, in the event that an artist contacts Danbooru to request their work be removed, the request is always honored and further work by that artist is banned from being posted.[8][9]

So, yes, we flagrantly ignore the "Please do not post these fanarts on other sites" messages you see (in English no less) on nearly every fanartist's site. But we also make way more effort to provide source and attribution than any other imageboard, and *certainly* don't claim the work as our own, so I don't exactly lose sleep over it.[10]

Some artists are aware their work has been posted to Danbooru and are okay with it.[11][12]