The Legend of Zelda (ゼルダの伝説, Zeruda no Densetsu) is one of Nintendo's longest-running and most popular series. Set in a magical world, the Zelda games generally follow the adventures of three characters (or incarnations thereof): the protagonists Link, Princess Zelda, and the antagonist Ganondorf.

While each game is different, the general plot often revolves around the Triforce, a mystical artifact left by the three goddesses that created the world of Hyrule. Link, Zelda, and Ganondorf each embody one of the three parts of the Triforce: courage for Link, knowledge for Zelda, and power for Ganondorf. In attempts to obtain the Triforce, or at least a piece of it, Ganondorf captures Zelda, and it is Link's fate to rescue her by defeating the villainous Ganondorf.

Spin-off games are not considered canon, and do not tend to receive the amount of attention or fandom significance of main series games. Exceptions include Hyrule Warriors, which has lead to a fan theory about the unification of the games' three timelines (see fan theories below) and Hyrule Warriors: Age of Calamity, which functions as a prequel to Breath of the Wild, although it contradicts the canon of the game.

Most self-identified Zelda fans have not played or enjoyed every installment in the series. Many fans tend to favor one game or subseries over others.[1] For example, the top-selling Breath of the Wild stimulated a lot of fan activity among both new and returning fans, leading to the rise of a BotW-specific fan community distinct from others in the series' 30-year history.

Fan theories on the games are common due to the series' expansive lore.

Breath of the Wild's place on the timeline remains unclear. Officially, the game is placed far after the events of the other games in the series; however, the developers have deliberately left it ambiguous which of the three timelines it follows. Series producer Eiji Aonuma has explained that the team behind Breath of the Wild had "realised that people were enjoying imagining the story that emerged from the fragmental imagery we were providing. If we defined a restricted timeline, then there would be a definitive story, and it would eliminate the room for imagination, which wouldn’t be as fun."[5] Aonuma and director Hidemaro Fujibayashi have also stated that the timeline is constantly changing, which they view as "new information and truths being uncovered" rather than contradicting or changing canon.[6]

As a result, timeline theories continue, especially regarding Breath of the Wild's placement, as the game features hallmarks of each of the three timeline branches. Some fans have theorised that this means the timelines have merged at some point after the rest of the games in the series but before Breath of the Wild. There are various theories about how this could have occurred; one such theory suggests that Hyrule Warriors should be considered canon, as it features a merge of the timelines within the events of the game. Other fans feel that trying to create a definitive timeline is pointless or contradicts the wishes of the creators, and that the games should instead be considered as occasionally referencing each other but ultimately independent of one another. 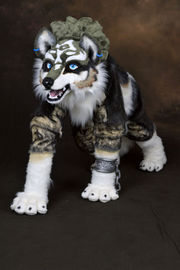 The Legend of Zelda fandom is prolific in terms of fan works. Archive of Our Own (AO3) has over 10k works listed for the fandom as a whole, just over 4,000 of which are tagged for the game The Legend of Zelda: Breath of the Wild. Ocarina of Time and Twilight Princess, as of February 2020, are the next most prolific with a bit over a thousand works on AO3 each. Most fanworks for this series, however, are on other, often older platforms—Fanfiction.Net currently hosts just over 31 thousand works in its Legend of Zelda category, and there are many websites devoted entirely to the series, or even specific subsets of the series.

Common tropes include a mute or selectively mute Link, crossovers between different incarnations of Link, and many more.

The most popular pairing across fanworks for most titles in the franchise is Link/Zelda. Some games have other, game-specific popular pairings, such as Link/Sidon from Breath of the Wild, Link/Sheik from Ocarina of Time, Link/Midna from Twilight Princess and Ghirahim/Link from Skyward Sword.