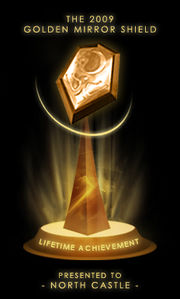 Created in 1997, The North Castle is a popular and long-running website dedicated to the early games in The Legend of Zelda series.[1] It and the fanfiction written by host Lady Juliet were the recipients of many awards, including the Zelda Temple's Zelda Oscars and the Exploding Deku Nut lifetime achievement award.

To me, North Castle, is a very, very special site. It may not be much to look at on the outside, but as quoted by many, it's whats on the inside that really counts. First of all, its important that the site has come so far. It may be hard to believe, but North Castle has been around since the beginning of the boom in the Zelda Community. It was setup in summer 1997, only months before the release of Zelda V. At the time, the community was small, only a handful of sites existed. Now the community is huge with lots of amazing sites offering all sorts of content and information. But North Castle is older than all the other large sites that exist today and although I only update once a month the site is extremely popular, attracting up to 1700 visitors per day. Not bad for a 'little' site, with the only staff being myself, myself, and no-one else but, myself :)https://www.northcastle.co.uk/site/about.html

“Though it’s not a site updated every other day as some, North Castle has proven that slow and steady can do just as well as the fast and timely, mainly because North Castle is a site that plays things differently. It speaks of history, community, stories, and folklore, which remain to this day the true roots of the Legend of Zelda series. It’s no doubt that North Castle should win this award; it easily deserves that and much more.” - The Missing Link, Founder of ZeldaBloghttps://www.northcastle.co.uk/site/awards.html

The static layout of the site, with the directory on one side, external links on the other, and content in the middle, was a common design for web 1.0 pages. The forums, too, harken back to fanspaces in the early 2000s. The site is divided into 4 main sections: the Archive, which contains information about the older games, the cartoon, merchandise, and downloadable Zelda media; the Courtyard for fan interaction; the Guild, which hosts fan creations; and Site Info.

Fanfiction by Lady Juliet and Kirsty

Included in the fanfiction section are the stories by Lady Juliet and her sister Kirsty. These long Link/Zelda fics were some of the early stories in the Zelda fandom that were available online, predating many of fics inspired by 1998's The Legend of Zelda: Ocarina of Time. [2]

[These are] the majority of stories written by myself and my sister Kirsty about the Legend of Zelda. They are loosely based on the original Zelda games and the cartoon and have influences from the other games. We wrote the series over several years and they are some of the most-loved and oldest Zelda fan-fictions ever written. I often look back now and wish I could improve them but they're so long, it would simply take forever! We hope you still enjoy reading them as much as we enjoyed writing them.https://www.northcastle.co.uk/guild/story.html